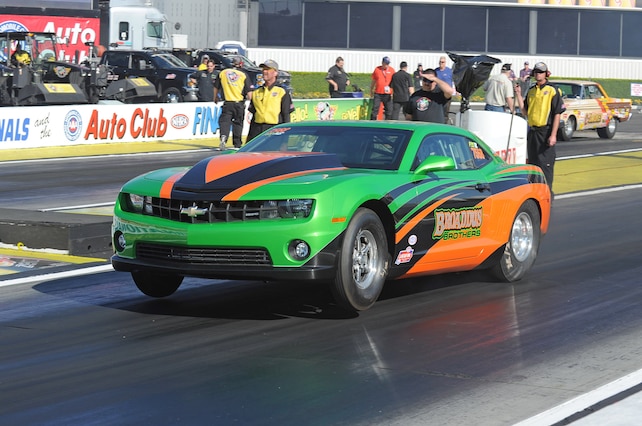 There is an age-old drag racing perception out there that race cars painted green are bad luck, but I would counter that pretty much anyone would take their chances with this one.

During the 2015 NHRA season-opening Circle K Winternationals at Pomona, one of the most stunning new Camaros to date hit the dragstrip for the first time. Based out of Yorba Linda, California, and campaigned by brothers Bryan and Doug Broaddus, the recently completed 2012 Camaro Super Stocker is but the latest example of quality craftsmanship to come from the highly reputed PMR (Phil Mandella Racing) shop.

From concept to its debut at Pomona in a span of two years, the newest entry from this longtime Chevrolet-branded racing team earned immediate recognition from both the event’s attending public as well as NHRA’s technical committee. In fact, the car received the NHRA Excellence in Engineering award at the Winternationals, a first for both PMR and Broaddus Brothers Racing.

“We purchased a body in white back in 2010 from Mike English, our local Chevy dealer,” said Bryan Broaddus. “Then in 2013 we took it to PMR and had them build the chassis. When we completed powdercoating the frame and tubing, it went to Don and Todd Barton for painting then back to PMR for final assembly.”

Classed in Super Stock as a FSS/B designation, the team is going forward with a supercharged LS 327 equipped with LSX heads and block from Chevrolet Performance. That engine features a Bullet solid roller camshaft, a Whipple supercharger, and a T&D rocker system. The car also features a torque converter and harmonic balancer from ATI as well as a Rossler TH400 transmission.

Prior to final assembly, Broaddus Brothers Racing tasked Westech Performance in Mira Loma, California, (Steve Brule and Eric Rhee) with the engine’s dyno work and baseline tune-up. The team has since installed a Racepak data recorder to help monitor their progression going forward.

While the Broaddus’ Camaro program is still in its infancy, the car has already run an 8.3 e.t. at 162 mph. Plans are for it to be active at several NHRA Division 7 Lucas Oil Drag Racing Series divisional races this season as well as a planned trek out to Indianapolis for the marquee NHRA Chevrolet Performance U.S. Nationals later this summer.