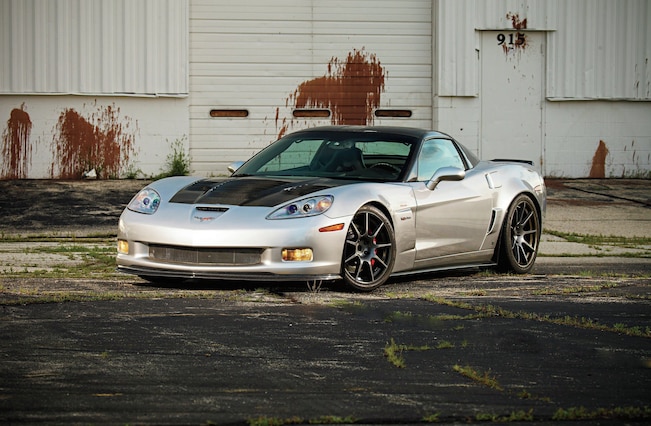 Sometimes Corvette owners get a bad rap. It’s assumed that everyone who owns one has leather driving gloves, antiquated leather Corvette jacket, driving cap, and an ample supply of cloth diapers in the boot to wipe the car down if even the slightest spec of grime gets on the car. Driving fast means breaking the 60-mph barrier, and it typically takes them a decade to crack 10,000 miles on the odometer.

In the Vette world though, such assumptions get blown out of the water by cars like the Blackdog Speed Shop 510 Corvette.

Originally started as a pro race team about 10 years ago, Blackdog Racing quickly evolved into Blackdog Speed Shop, a place where street cars go for a dose of racing-inspired performance to make them dominant on any surface. More well-known for building cars with boosted engines, Blackdog decided they wanted to build a legitimate street Corvette with racing performance and handling, but with the driving comfort of a street car. And without the need for a supercharger or turbo system.

To build a Bruce Banner/Incredible Hulk type of car, the starting point had to be a good one. After some research, Blackdog decided on an ’06 Z06. The first mods were to replace the factory hood, roof, rockers, A-pillars, and B-pillars with carbon-fiber pieces from Blackdog Speed Shop. Carbon-fiber Gurney flaps and rear spoiler were also installed. Besides reducing the car’s weight further, the carbon-fiber pieces serve a very functional part into this Z06’s blistering performance. The Blackdog louvered carbon-fiber hood works in conjunction with a Blackdog carbon-fiber street splitter to help create extra downforce, while evacuating more hot air from under the hood. The rear spoiler, Gurney flaps, and rocker panels help increase rear downforce, so in hard maneuvering the Blackdog 510 stays planted firmly on the asphalt, even when the full wrath of its monster LS engine is unleashed.

Moving inside, the factory seats were pitched in favor of Cobra carbon seats, mounted to the factory seat tracks so they could be adjusted just like the stock ones. To keep driver and passenger secure in even the highest g turns and acceleration, a harness bar and full harnesses were also installed.

Underneath, Blackdog Racing-developed spherical control arm bushings/bearings replace the factory bushings, and in-house designed three-way adjustable shocks replace the stock dampers. Blackdog’s three-way street shocks are based on the design of the same shocks they developed for the Blackdog World Challenge GT Corvette racer. With a mind for well-mannered street driving along with track day handling, the three-way street shocks offer enough adjustability that you can go from street mode to an aggressive track handling mode within minutes of arriving at the track. Finishing things off are a set of Dynamag carbon-fiber wheels with magnesium centers, wrapped in Pirelli P-Zero rubber.

To make the most of all the handling and suspension modifications, a plain old LS7 just wouldn’t cut it. The goal was for performance similar to a boosted engine, but with full streetability and manners. A 510-inch LS engine, using a tall deck block with a bore of 4.200 inches and a forged crankshaft with throws of 4.600 inches, was the answer. The heads are custom-ported factory LS7 units, and the valvetrain has been upgraded with a custom-ground camshaft to handle the rpms and quick accel/decel of track use. Feeding air to those heads is a custom-built intake by Wilson Manifolds, spec’d out to feed the massive Mouse plenty of air and fuel. The LS7’s dry-sump oiling system was retained, but customers can order the 510 engine package with wet-sump oiling if they so desire. It breathes through 2-inch diameter American Racing headers, with a measured output of 802 horsepower at 6,800 rpm and 692 lb-ft of torque at 5,600 rpm.

That power is fed through a carbon-fiber driveshaft using Blackdog billet driveshaft couplers into a ’10 ZR1 six-speed transmission—torn apart, modified, and reassembled by Blackdog Speed Shop—to handle the torque and track abuse the C6 was destined to see. The clutch is an RPS billet carbon twin-disc setup. The rearend is factory Z06. Slowing the fun down in the turns and on the street are Brembo calipers and slotted rotors, six-piston binders up front, four-piston units out back.

The goal of the Blackdog 510 Corvette was to earn the title of ultimate street Corvette, combining the vast wealth of racing knowledge Blackdog had accumulated with their World Challenge Corvette, with the proven methods for great street cars. The result, a C6 that’s just as much fun to drive to and from the track as it is to drive on it.