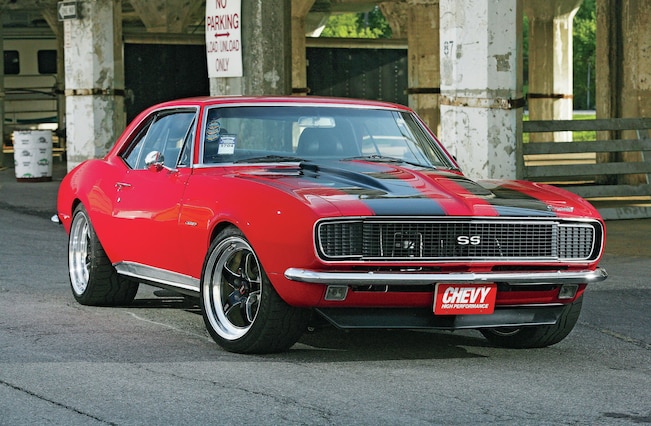 There’s a lot to be said for staying the course, and even more to be said for maintaining that direction in the same car for 16 years. Hot rodder Al Noe (pronounced “noy”) believes in loyalty. He believes in the core tenet of hot rodding. He believes in working the combo until it flat runs dry…and can do no more than step up with yet another concept, another bullet, a chassis revision, a rolling-stock rethink. But more than anything else, he believes in family (partner Lisa and children Allie 16, Daniel 13, Michael 10). His ’67 is more like a big red hound that’s been part of the family unit ever since there was one. His kids are maturing in the midst of it. It has always been there.

“I built this car so that as my kids grew up, we would be able to enjoy it together going to sporting events for them, and then on weekends I could autocross it, drag race it, or hit an open track event,” said Al. “As my kids got older, it became known as the Old Red Car but in a very affectionate way. My sons think it feels like a really fast roller coaster.

“I always try new things to see if I can improve performance. My goal was to go 11s in the car with the same setup as I autocross it, and I achieved that this year with the BluePrint LS engine. I drive it everywhere [Al claims he doesn’t own a trailer] and routinely put 2,000-3,000 miles a year on it.”

Al began the crush more than 17 years ago. He had a numbers-matching ’71 Corvette with a Lingenfelter-prepped LS5 then. It was a fun car but Lisa was pregnant with her first child and daddy Al looked beyond the two-seater and “decided to build a more family oriented car.” A big sedan, a station wagon? His hot rodder’s brain simply said you need a ride with four seats instead of two.

Al’s been active in the Ohio basin for most of his professional life, holding the keys at Stainless Works, Super Trapp, Mr. Gasket, and now at Summit Racing. While working for Gasket, he went schmoozing, falling by Chuck Hanson and the crew at Hot Rod TV. He saw the ’67. It was a “set” mule and reminded him of his first car: a ’68 RS/SS. It was overwhelming nostalgia, and ultimately irresistible. He made the deal, brought it back to Ohio and promptly blew it apart. Along the way, Noe had become enamored of Pro Touring progenitor Mark Stielow’s Red Witch, which has since fostered a warm, lasting relationship between them.

“When I first autocrossed this car 16 years ago, it had 17-inch Torq-Thrusts and people wondered what the hell an old restored Camaro was doing there. As the car got better and I learned to drive it fairly well, it became the norm to drive it out, race it, and drive it home. I take the kids to baseball, football, soccer, as well as car shows and different racing events.”

As a qualifier, Noe built the car much as any CHP reader would. There’s no frippery, no obfuscation, and 99 percent of the stuff he used came from the Summit catalog. Noe has maintained the original flavor and didn’t see the point of hiding or shading anything or smoothing the crap out of it. Just as you would.

Having had experience with several small-blocks, Al stepped up to a popular idea: insert LS crate engine and then lean on it a little. What began as an OE LS7 was discreetly massaged in central Nebraska by prolific BluePrint Engines. A BluePrint tenderized forged crankshaft (4.065-inch stroke) supports forged 6.125-inch I-beam connecting rods in place of the iffy powdered titanium ones and the OE pistons were exchanged for 11.0:1 Mahle buckets. The LS3 swirl-polished valves are manipulated by a BluePrint camshaft (0.624/0.624-inch lift; 295/255-degree duration; 114-degree lobe separation angle) and attended by BluePrint pushrods, dual valvesprings, and chrome-moly retainers. Sturdy, stock LS3 rocker arms wag freely atop the LS3 CNC-ported cylinder heads. Al used a Holley muscle car swap oil pan to put the engine in the Camaro. In the matter of electronics, he commissioned a GMPP crate engine controller with drive-by-wire feature.

Fuel is sourced via an Aeromotive pump and distributed evenly by 42-lb/hr injectors. Air is pulled through a 90mm throttle body, and there is a Spectre cold-air intake at the far end of the tract. The lump is serviced by a C&R aluminum core (and thermostatic fans) that is also equipped with a separate cooler for the oil and the power steering fluid. To kick out the waste, Al incorporated 1 7/8-inch primary-pipe Kook’s headers and plumbed them into 3-inch diameter MagnaFlow silencers and Stainless Works exhaust pipes. Over at Backstreet Performance in Medina, Ohio, Erik Johnson finessed the engine to start, run, and drive like an OE product, all the while extracting 565 lb-ft of torque at 5,000 rpm and 625 horsepower at 6,300 rpm. As such, Al enjoys 19 mpg on the open road and is able to click off high 11-second elapsed times as well.

Produce is collected by a Tremec TKO 600RR, a five-speed hellion that provides a scratch-out 2.87:1 low gear and an 0.82:1 top (Al’s happy cruising with that 2.87:1 gear). Torque is assimilated by an Advanced Clutch Technology dual-disc 10.5-inch pressure plate assembly, McLeod hydraulics, and Quick Time bellhousing. The third member is a stock-width 9-inch rolling a Wavetrac differential and 3.50:1 cogs that were deburred and polished by C&R Racing.

The glove that handles the power is modest but effective and nothing more than Al needs to get the job done. He located the housing with Afco coilover shocks and a special sway bar welded and installed by Dan Tesar and Larry Brunkala at Precision Hot Rods in Macedonia, Ohio. At the leading edge, Al went with RideTech A-arms (including a Dick Guldstrand modification), Afco coilovers, and a sway bar. Threading his way through a slalom is easier now with Stielow Engineering and Development spindles and an AGR quick-ratio (12:1) steering box.

Sixteen years ago, the Camaro had a tarpaper roof that Al just could not abide. He peeled it off. He did a lot of patching and welding. Then Keith Wright and his team at Barberton Auto Craft (Barberton, Ohio) did the final block sanding and prep to receive the ’96 VW Jetta Red and apply the factory Z/28 stripes. For the latest incarnation, Al took the car to Tom Long in Burton, Ohio, so that he could put up the DSE mini-tubs critical to the fatties, because we’ve got fatties all around. The Camaro rolls steady and hooks hard on Weld RT-S 18x10 and 18x12 forgings that flex Falken Azenis RT615K 275/35 and 315/30 claws. To carry a little less unsprung weight (and impose on the squat, sticky rubber) Al deemed that 13- and 12-inch Baer brakes would lasso the 3,250-pound girth with ease. If past performance is an indicator, it appears that he was correct in his assumption.

From Al’s vantage point in his second home, the interior pretty much adheres to the original form, although he did infuse it with stuff unimaginable back in the day. Dale Ollie wired the car and Al and Dale installed an Alpine head unit—Bluetooth, hands-free calling, and Pandora along with Sony 6x9 rear speakers and dual tweeters in front. No long-haul road car should be without an HVAC system so Al put a Vintage Air unit in his. He sunk a Classic Dash insert in the original space and stocked it with Auto Meter Phantom gauges.

Max’s Auto Trim in Barberton, Ohio, swathed the Fox Mustang GT seats and brought them visually in line with factory Camaro material. Those red RJS racing harness straps excite the interior and break up all that black. Close to hand, Al stirs a Steeda shifter and palms a Grant Elite GT steering wheel.

Al has punctuated his Camaro’s past with notable performance and high praise: CHP Top 10 spot in 1998; Goodguys 2014 Top Ten Non-Pro autocross slot; a feature in Camaro Performers; a 7th out of 14 at the PHR 2013 Muscle Car Challenge. This old red dog’s got legs and just keeps on running.