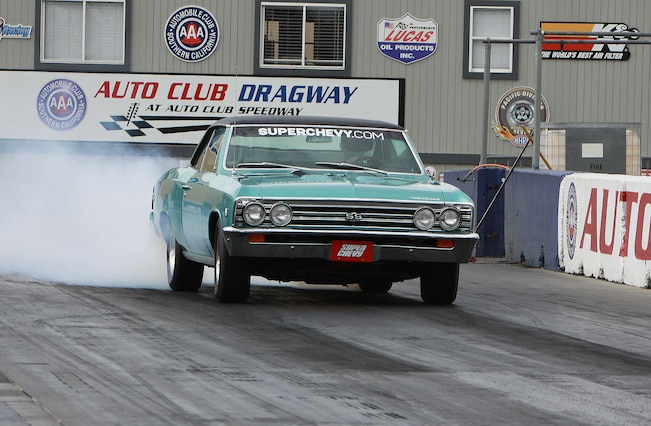 It was a long time getting there. A build that started in Georgia and got finished in Tampa finally hit the drag strip—in California, of all places. Our ’67 SS396, better known in these parts as the AMD Chevelle, currently resides at the magazine’s offices in Southern California. We have big plans for this remarkable A-body, including the installation of a set of Edelbrock oval-port big-block heads.

If you’re just meeting the AMD Chevelle, we built 411-horse 413 out of the smog era 402 that was under the hood. The engine is bored .060-inch, compression is 10:1, and the heads received a light bowl work and there was a three-angle valve job for the stock-sized valves. Opening them is a Lunati mechanical flat-tappet camshaft with .550 int./.570-inch exh. Lift (with a 1.7 ratio rocker), 238/248 degrees of duration at .050-inch and a lobe separation angle of 112 degrees. After the engine was in the car, we swapped out the 360-horse factory 396 manifold (which was leaking coolant) for a Weiand Street Warrior dual-plane aluminum intake, which added 37 rear wheel horsepower on our dyno in Tampa.

Backing this combo is a TCI 4L80-E and a 3.73 Posi-equipped 12-bolt. From a drivability standpoint, it’s been great, completing the Hot Rod Power Tour (1,602-miles) with little more drama than gas stops.

Before we could get to the head swap, we wanted baseline performance numbers. That meant it was out to Auto Club Speedway in Fontana, California, for a strip test, then a short drive to Westech Performance for a session with its Superflow chassis dyno.

At the track, we ran the car on its Coker redline radials. Our driving technique was simple: Powerbrake the Rat against the converter and on the last yellow launch as hard as we could. The track was up for it and the tires hooked. Our best (and first) pass was a 13.534 at 102.46 at 2,500-ft corrected altitude. On the chassis dyno, it spun the rollers to the tune of 318.9-hp and 439.8 lb-ft. With a super tune (more timing, lighter springs in the distributor, a little more jetting, etc.), we’re sure we could have done better, but we only got four runs in before rain chased us from the track. As it was, the weather was going away with each successive run.

A little heat in our BFGoodrich Silverstone redline radials from Coker (225/70R15) and they were good to go. The starting line had all kinds of grip.

Our 413-inch Rat wears ’71 model year smog heads that were treated to a 3-angle valve job. The only giveaway that it’s not stock is the Weiand Street Warrior intake manifold. Carb is a Holley 750 and the cam is a mechanical Lunati flat-tappet grind.

We made three consecutive passes on the Westech Performance Superflow chassis dyno and the results were all within a couple of horses and lb-ft. Peak horsepower was at 5,000 rpm, while torque peaked at 3,200.

As the rain got closer, our performance slowed. Still, there’s nothing like a good smoky burnout to make you feel better.