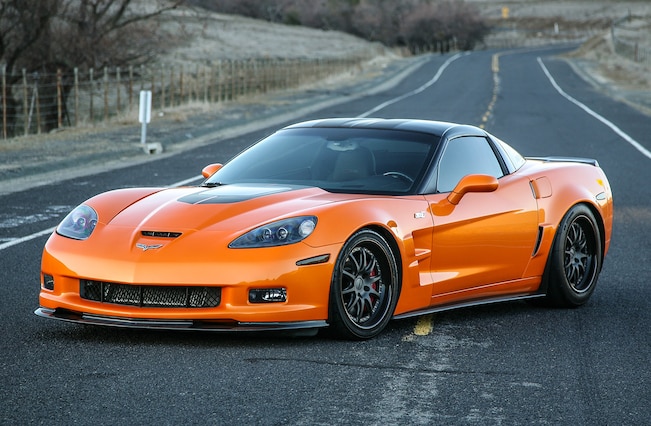 There are plenty of clean cars and lots of fast ones, but seldom does someone dig deep enough to build one that checks both boxes. Jimmy Pham’s ’06 Corvette Z06 does so without question. It’s flawless and it’s fast. But what is its strongest attribute? Its brawn or its beauty? You be the judge. And while you ponder that for a moment, chew on this one as well. This Vette started as a stone stock black Z06 coupe and in a matter of months it received a color change, ZR1 attire, wicked wheels, and a engine combo good for 901 hp to the wheels on paltry 91-octane pump gas.

“I’d always wanted a C6 Z06 but never thought I could afford one until I stumbled onto this one for a great deal, and once it was mine, the end goal was to have it dropped on 360 Forged wheels with a heads and cam package. That’s it,” said Pham.

As you can see, his Vette has progressed far beyond a simple heads and cam combo. But being an Oakland, California, native, it only made sense that he’d create a car of this caliber.

“Growing up in the East Bay you’re surrounded by modified muscle cars. I guess I’ve always liked fast cars, and out here it gets in your blood early,” he explained.

Being a car guy, Pham has owned his fair share of modified imports and Euros, but at his core he’s a Chevy man.

“I’ve wanted a ’69 Camaro since I was a kid but still haven’t gotten one. I have owned a ’67 Pontiac Firebird, two third-gen F-bodies, and a pair of fourth-gen F-bodies: one LT1 and one LS-powered,” he said.

That LS-powered F-body was actually propelled by an LS2 with a ProCharger D1SC blower and a custom FMIC that made 650 rwhp, a whopping 645 lb-ft, and wore the same gorgeous House of Kolor Sunset Orange Pearl that blankets this Z06.

“I originally started with a matte-white vinyl wrap on the Corvette but I wanted real paint, so a few months after the wrap I stepped up and had it painted by Eddie at Complete Automotive Reconditioning Service and continue to have it maintained by Marco at Pristine Detail,” he explained.

Sexy lines are nothing without stance, and Pham knocked that down with stock leafs and QA1 double-adjustable shocks along with custom Forgeline wheels wrapped in Yokohama front rubber and Mickey Thompson rear drag radials. The wheels measure 18x10.5 front and 18x13 rear, which allows him to run more rear rubber compared to the more common 19-inch rear rollers that require rubber-band tires with minimal sidewall.

Speaking of traction, there’s not much of it thanks to 901 hp and 830 lb-ft of torque at the wheels on crappy California 91-octane.

“Torque is what moves you. There’s no lag waiting for the power to hit. That’s why with all of my supercharged builds I’ve kept torque in mind since I drive my cars on the street,” Pham explained.

As a testament to his convictions, I can safely confirm that serious twist joins the party around 3,000 rpm—much lower than most centrifugal blown combos—and spinning it past 6,500 rpm is futile because you get the same drive even if you short shift it. Now, that’s impressive on the street.

How impressive? Try high 9-sec e.t.’s at 145 mph at the dragstrip spinning tires through half-track. How’d he do it? And how’d he do it on 91-octane pump gas? With a carefully chosen combo, that’s how.

Josh from JRG Motorsports helped him plan the build, pull the stock engine, assemble and install the rebuilt engine while Tony at T.O.E. Performance did the machine work. Rick at Synergy Motorsports tuned it.

Believe it or not, he’s still using the stock LS7 block, and it’s holding the 13 psi of boost just fine. Maybe that’s because it’s got a spot-on tune while the custom cam from JRG Motorsports correctly manages cylinder pressure and valve events on the 9.1:1-compression mill.

A Vortech V-7 YSi supercharger kit from A&A with an upgraded FMIC and a Cartek Flip Drive kit ensure plenty of boost without the annoying belt slip. All that boost needs plenty of fuel, so an A&A 1,200hp-capable twin pump fuel system brings the gas along with FIC 1,000cc injectors, a GP Tuning custom FlexFuel system, and an Alky Control twin nozzle methanol injection kit that utilizes massive -10AN lines.

Spent gasses are forced through a pair of Kooks 1 7/8-inch long-tubes and matching X-pipe and into a Corsa cat-back exhaust. The combo sounds wicked against the vented bypass valve for the blower and the rump and bump of the big cam.

“I love the way it sounds. In fact, I can remember the days before the LS motors got popular, people swore big cams and boost didn’t work. That was until they got brave enough to try them,” Pham explained. Well, he was brave enough, as the first cam he tried was just too small, and when he added this big bumpstick, the naysayers swore he’d lose power. He didn’t. He actually gained 70 hp to the tires. How’s that for egg on their faces?

Power is nothing without control, so a burly RPS triple-disc clutch, C5 Z06 axles, and plenty of The Driveshaft Shop driveline components confidently turn the massive power into forward motion.

“About the only thing I haven’t upgraded yet is the transmission and rearend. Once they go, I’m going to throw the book at it so I can drive the car without any worry,” Pham said.

To the delight of everyone associated with the car, Pham actually drives it on a daily basis. Being that it’s not a trailer queen might explain why so much attention was also spent on the ambiance of the interior.

“The stock interior was already nice so I focused on adding lots of small details like the Hydro Dipped trim pieces, the stainless steel gauge faces, and the AEM digital boost and air/fuel ratio gauges on the A-pillar,” Pham said.

As if the blown 427 under the hood isn’t enough music to his ears already, Pham added an Alpine double-DIN head unit with built-in navigation and backup camera along with a matching amp, a heap of JL Audio speakers, and a custom stealth box with a JL Audio 10W3 sub.

Since writing this story, Pham has also outfitted the interior with a Race Specialty Designs bolt-in Drag rollbar and plenty more OEM Centennial interior bits like a suede steering wheel and matching shift knob, boot, e-brake handle, and armrest. He also added two sets of rims since our photo shoot and tweaked some auxiliaries on the engine; we suppose the pursuit of perfection is an endless one.

“One day I’ll be finished with it, but for now I’m going to keep adding small stuff and just enjoy driving it. I want to take it on some trips to the coast and to the mountains,” he added. Yes folks, this is a 900hp street car that retains its air-conditioning system, runs down literbikes on the freeway, and can be driven across the States. If that isn’t perfection, I don’t know what is.