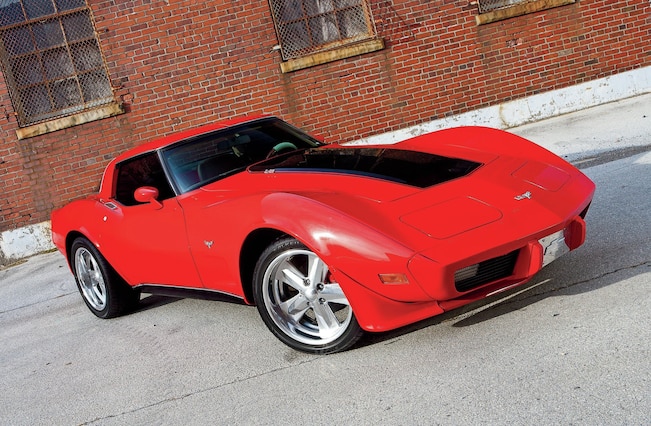 Throughout the muscle car hobby, and especially in the Corvette world, it’s not uncommon to hear stories about how a long-term father and son project has strengthened the bond between them. That was certainly the case when Jestin Allen and his father, Robert, started working on this ’79 Vette together.

Jestin has fond memories of when he first laid eyes on the car. “It was Christmas 1988 when my mom bought my dad the car as a gift. It wasn’t in the best shape, but she got it for a good deal, and it was a Corvette. My father’s dream car. Although I was only 9 years old at the time, that was the turning point in my life that got me interested in cars.”

Robert was appreciative of the Christmas present, but at the same time he could tell the car needed a lot of work to get it up to par. He was excited to get started, as he saw plenty of potential in the somewhat rough C3. “It had a lot of things wrong with it that could not be seen by just looking at the exterior, while close inspection revealed the body had some flaws that would need to be addressed at some point as well,” said Robert. “I started with the suspension and put on new shocks and brakes, along with a few other odds and ends. I worked on it off and on for the next nine years and was finally able to save enough money to rebuild the engine.”

Through that time Jestin’s attraction to hot rods began to grow stronger and he really started to express an interest in the car. In fact, auto body was his major in high school shop class. Doing the bodywork on his dad’s Corvette was his main goal.

“I continually asked my dad if I could paint the Corvette,” recalls Jestin. “My dad kept telling me ‘No, not until you turn 18.’ Well, he finally caved when I talked him into letting me repair just the front bumper. I immediately repaired and painted it but scratched the front fender. Without asking, I began blocking and sanding the whole car in our garage.”

Robert came out to check on Jestin’s progress on the bumper and that’s when he saw that he’d sanded the rest of the car. “At first I was upset that he had gone beyond what I had allowed him to do, but at that point it was a done deal. Basically the whole car was sanded,” remembers Robert. “Besides, at the time he had been working part time at an autobody shop, so I figured he had the knowledge and skills to finish the Vette.”

Not long after, Jestin enrolled in college but continued working at the body shop. It was three straight months of late-night and weekend bodywork and paint sessions. “Those were the most exhausting months of my life,” Jestin recalls. “But seeing the progress we were making on the car also made it the most rewarding.”

While driving the Corvette home after a long night working at the paint shop, the engine’s oil sensor had come loose and completely backed out. Unfortunately, it went unnoticed by Jestin and the engine seized before he was able to make it home.

“I had to pick him and the car up from the side of the road,” remembers Robert. “The engine was gone, but I figured since he had done all the bodywork and paint, he saved me a bunch of cash, so that money, which was originally put away for paint and body, ended up going into a new crate engine.”

They loaded the ’79 with a Chevrolet Performance 290hp, 350ci mill and rebuilt the stock trans. It’s not the kind of engine that will light up the world, but this project isn’t based on brute strength. It’s more about finesse and staying within a budget. With that said, Gregg Barrett handled the engine’s machining and assembly then perched a 750 Holley carburetor on top of a Holley polished intake manifold. A Holley Powercharger air cleaner sucks in atmosphere while ceramic-coated Hedman headers process spent fuel through a set of Flowmaster mufflers. Electric cutouts were included for those times when Jestin feels like announcing his presence and adding a little excitement to the situation.

With the suspension and brake system being rebuilt to stock specs, Jestin and Robert ramped up the overall look with Boyd Coddington five-spoke wheels on all four corners (18x8 up front and 18x10 out back), and wrapped the ensemble in Falken rubber (245/40-18 front, 275/40-18 rear).

With the body fully smoothed and prepped, Jestin doused the Vette in ’03 Dodge Viper Red. He accented the hood with a PPG Jet Black stripe for a little more attitude and race inspiration.

A.J. Rivera of Diverse Kreations took charge of the tunes and wired up an earth-shaking sound system featuring a custom sub box armed with an MTX 12-inch subwoofer. He then incorporated strategically placed mids and tweeters throughout. Not done, he built a one-off center console, which houses an 8-inch monitor. Jestin painted A.J.’s handiwork to match the car’s exterior motif then continued the restoration process with OE-style carpet and upholstery.

Since the car’s completion, Robert handed the keys over to Jestin as a reward for his overwhelming enthusiasm and interest in the project. With the number of hours of hard work he put into it, it was an easy decision. “Obviously Jestin was attached to this car,” said Robert. “So I was more than happy to give it to him. He did an amazing job on the bodywork and paint, and everything else that needed fixing or replacing. He really made me proud. But the best part is the great experience we had working together.”

Jestin gets the car out as much as possible and looks forward to the next cruise night or car show. In fact, he’s piled up a nice collection of show-n-shine trophies in the process. “I’m very proud of what my father and I accomplished,” said Jestin. “It’s exciting for me to show people what a little hard work and elbow grease can do.”

It was a 13-year project built on a tight budget and more frustration than the duo had planned to go through, but the hours of father/son bonding built a stronger relationship than any amount of money could. Oh yeah, and a really cool Corvette came out of it as well.

Take a look into our archives at this turbocharged and EFI-boosted Corvette concept! The L48's output was boosted to 260 hp.