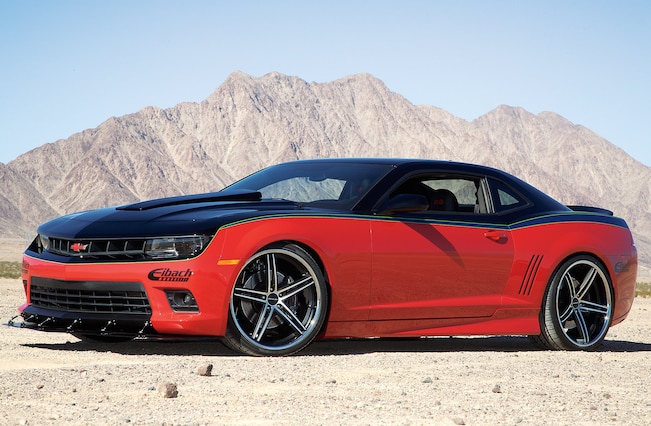 Welcome to nonstop gambling, bright lights, and a ’round-the-clock party in the city that never sleeps. What happens in Vegas stays in Vegas, right? Not exactly, especially when it is SEMA week! The Specialty Equipment Market Association holds the annual SEMA Show in the not-so-dark desert city, where automobile aftermarket madness is shared and flaunted. For that one intense fall week, what happens in Vegas gets instant worldwide fame upon each reveal, as projects and products are proudly displayed in-house, and all over the web, spreading like wildfire. The hype and stress of many unique auto builds and projects leading up to the Vegas event begin many months, and oftentimes years, before the start of the show.

Working together to draw in hoards of eagerly awaiting auto enthusiasts, the car acts as the base for an advertisement, while SEMA acts as the perfect venue for a production parts display. Karl Performance, and specifically Ryan Vitiritto, had the Vegas venue in mind when brainstorming a way to showcase the shop’s award-winning automotive ingenuity happening daily in Des Moines, Iowa. You see, they’ve got thousands of performance parts on hand, combined with their own machine shop. Catering to high-performance applications, and really anything you could ever want, the Karl Performance team set their sights on SEMA 2013. The goal was to showcase the capability of car and crew, and for that, it was time to pick the ride.

Now that the venue was picked to showcase the talent, the chariot to carry the performance parts had to be swiftly selected. Well, as you’ve guessed, Karl Performance chose the ’14 Chevrolet Camaro SS, and the rest was history. Starting with the general’s potent 6.2L V-8 was a no-brainer, netting nearly 426 hp and 420 lb-ft of torque in stock trim, with a manual transmission (TR6060). Karl Performance and SEMA go hand in hand with aftermarket performance, meaning a supercharger would have to be in store. The bulletproof build started with Lingenfelter’s GT9 cam, and the company’s spring and titanium retainer package. From there, the team implanted a Magnusson 2300 TVS supercharger with COG drive, making it their own Karl Performance Edition, at a stout 13 pounds of boost. The air-to-water intercooler helped to stash temperatures down low, when ripping up the nearby asphalt. Tying the powertrain upgrades together is a Rotofab intake, combined with a full exhaust system. Starting up front, Dynatech long-tube headers were installed, leading into the remaining Magnaflow setup, working together for a screaming tone. With a dyno in house, Karl Performance’s Clinton Brooks tuned the blown SS, and with that, the power was bumped up to a respectable 573 hp and 541 lb-ft of torque. Since SEMA calls for more than just horsepower, all corners of the Camaro would have to be touched and transformed before setting off to the sandy city in Nevada.

Let’s sum up the superb suspension setup with one word: Eibach. Rightfully so, Eibach completely changed the handling characteristics of the ’14 Camaro with a set of Pro Street coilovers, front and rear. The team wanted to make sure that corners could be carved with ease and decided to add even more stiffness with a pair of Eibach sway bars. The Pirelli PZero Nero 315s out back surely help with the not-so-stock horsepower numbers, and the EBC dimpled and slotted, front and rear rotors reign in the ponies when it’s time to slow things up a bit.

Since the powertrain and suspension components were modified, it was time for Karl Performance to move over to the cosmetic side of the equation, especially since the SEMA competition was heating up and was surely calling for outstanding, eye-appealing additions. Forget the bland black or boring blue—Karl Performance decided to custom-paint its SEMA stallion, combining PPG and House of Kolors shades, starting with a Midnight Black over Red Hot, with a True Blue Pearl stripe and Lime Green outline. What a mouthful! Needless to say, the paint rightfully pops, and the Camaro was ready to accept the numerous body bolt-ons. Starting at the front, the Karl Performance Edition hood insert adds some aggressive flare, and the Chevrolet bowtie was dipped in Red Hot to match the rest of the body.

Looking further down, you’ll see a Karl Performance Edition front splitter for some added downforce while on the track, and a pair of GM Performance side rockers adds some factory flash. Matching the front splitter, our view shifts to the rear of the Camaro, for the custom rear spoiler. Completing and complementing the transformed body are Lorenzo WL197 wheels, 22 inches all the way around, wrapped in those performance-ready Pirellis. Open the driver door and you’ll quickly reveal the custom-embroidered seats sitting next to a Hurst shifter. And with that, the Karl Performance custom Camaro was complete. The only thing left to do was ship it to the desert.

As soon as SEMA began, it was clear that the Karl Performance Camaro was creating a whirlwind of appreciation, as fans flocked from all over, noticing the custom touches, added horsepower, and creative paint scheme. That Thursday, the Chevrolet ’13 SEMA Design Award for Best Chevrolet Sports Car was presented to General Manager Dave Johnson and Late Model Performance Sales Manager Ryan Vitiritto. Ryan said, “What an honor. We put a lot of hard work into this project, and to see it be recognized is just amazing.”

Don’t worry—you, too, can share Ryan’s satisfaction. You see, Karl Performance is offering, while in limited production, the 573hp Camaro. You can own a piece of an award-winning design, well actually the whole car! Also available from the Iowa-based performance shop are conversion kits for fifth-gen Camaro owners that offer up the opportunity to create your own masterpiece. Teamwork can play an important role in any project, especially an aftermarket performance–oriented one. Lucky for you, the consumer, professionals like Karl Performance have taken the guesswork out of the problem and created solutions based on what works best. Instead of just throwing parts at the car, merely hoping it becomes faster, call up a performance shop to get ahold of pre-packaged performance with proven results.

Saying that SEMA is intense is an understatement, and such, winning an award is a long shot because the competition is so fierce. As it was stated earlier, teamwork can pay off greatly, especially in a contest. With that, Karl Performance would like to take a second to thank its sponsors: Eibach Springs, Magnuson Superchargers, Lingenfelter Performance Engineering, Pirelli Motorsports, Dynatech Headers, Magnaflow Exhaust, Hurst Shifters, and Lorenzo Wheels—for without each member of a team, most do not succeed.