Stitchcraft turned a behind-schedule SEMA Camaro into a timeless masterpiece. 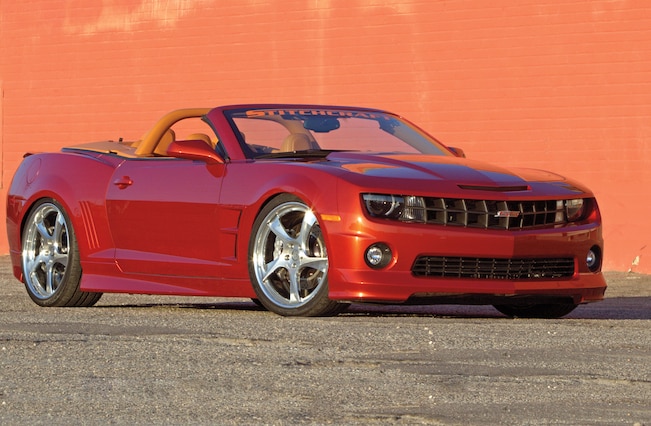 Steve “Revo” Reeves is a 49-year-old guy who knows a little something about interiors. He first learned the trade in a high school auto upholstery class, and he’s spent the last 35 years running Stitchcraft Interiors in Westminster, California. Stitchcraft has done several thousand interiors in that time and has been featured in high-profile shows such as Overhaulin’, X Games, and Orange County Choppers.

And Revo does some wrenchin’ on his own vehicles, too. He’s built, painted, and reupholstered 120 of them. Clearly, this master designer isn’t the type to turn down a project—especially when GM offered him a new Camaro convertible for the ’11 SEMA show.

“As a builder for GM, we have to submit proposals for the project vehicles they offer,” said lucky dude/Stitchcraft owner Reeves. “So we submitted a proposal for the new Camaro convertible—a drop-top really allows us to do what we do best. And we were awarded one of the few convertible Camaro SEMA projects that year.”

To have an OEM give you a SEMA project vehicle sounds pretty awesome, right? Damn straight. But there’s a catch—and it usually involves a short time frame for the build. Stitchcraft Interiors had less than two months between when Revo picked up this Camaro convertible 2SS at DeLillo Chevrolet and when it had to be at the SEMA show “We had about seven weeks to do this car,” he explained. “We’ve done this before, and we like to do mods in a certain order [to stay on schedule]: We start with the interior, then move on to other areas of the project.”

But right off the bat, a few issues forced Stitchcraft to change the schedule around. And did we mention that the company was doing two SEMA project vehicles that year?

So Stitchcraft kicked off the sleep-skipping, caffeine-ingesting fun by starting with the Camaro’s L99 engine. This mill stayed internally stock, but it got some big-time bolt-ons: The team installed a pair of Doug’s 1.875-inch long-tube headers, a cross-pipe, and a 3-inch cat-back exhaust system first. The entire interior was removed, and then they sent the car over to Vortech, where a Lysholm 2300 supercharger system was waiting.

As the big V-8 was getting boosted, Revo and his team were bringing their interior concept to life. “We knew we wanted to build an upscale vehicle, with everything including the trunk upholstered in leather. Pecca, our leather sponsor, sourced a special color called British Tan for the project. And high-end Mercedes English Wilton Wool carpet was chosen.”

Reeves and Stitchcraft employee Gaston came up with an armor-plated interior design—but to do it how they wanted was going to take lots of time. “To look like armor, lots of small, detailed design work was sewn into the inserts and seat bolstering. While a normal seat back pattern might have like 22 pieces to it, the Camaro’s had around 100 pieces,” Revo revealed.

The front door panels’ pockets were closed up and enhanced with speaker enclosures for the Alpine system. Next, the rear door panels were redesigned to match the front panels, a rear armrest was added, and the rear seats were cut so matching headrests could be installed. A tonneau cover and CDC light bar—leather, of course—were crafted, then ultrasuede was inserted into all the seats, door panels, and dash. A hand-stitched Grant steering wheel was a nice touch.

And then, Stitchcraft had to make all of that custom upholstery fit perfectly…not a small task.

“We also had to properly gap the car,” Reeves explained. “That’s when you shave off every piece of the interior so the clearances are right. For example, take the door panel where it meets the dash: There’s very little clearance there, so if you put leather on both pieces, the door won’t shut. And it’s not just the layer of leather—it’s the seam where the leather is sewn together. So anywhere anything is touching another surface, we had to take that down.”

While the Stitchcraft team was putting in long hours on the interior—it turned out to be a whopping 280, or nearly 12 full days—the car itself was enhanced with a 3dCarbon body kit. The aggressive body mods included a front air dam, fender vents, side skirts, and rear spats and spoiler, which blend nicely with the CDC rear valance. Anzo headlights brighten up the front end, and its tinted taillights complete the lighting upgrade.

And then it headed for the paint booth. Legendary body-and-paint man “Slick” Vic Sapien would be spraying the color, to the delight of Revo. “Vic has mad talent, that’s all there is to it,” Revo exclaimed. Vic clearly showed off that talent by applying two coats of sealer, four coats of BASF Copper Cinnamon Pearl, and four coats of clear to the Camaro body. From the looks of it, there was a little bit of wet sanding, too.

As you might imagine, all of this meticulous work took some time—as in, when the freshly painted Camaro got back to Stitchcraft, Revo and his team had only 36 hours before SEMA. Time to thrash.

“With the Camaro, some things slowed us down so we moved our schedule around quite a bit,” Revo admitted. “So when it came back from paint, we only had three days to finish—and the interior was out of the car. Let’s just say that we ended up working on several areas at once.”

That is, they had little time to finish the suspension, brakes, audio, and alarm. Seven guys descended on the car, with four wrapping up the interior; two installing the H&R coilovers and Baer brake system; and Revo finishing the trunk remodel; the dual-amp, four-sub speaker enclosure; and the alarm system.

Amazingly, it made the SEMA show—barely. Those beautiful, 22-inch HREs rolled onto the Las Vegas Convention Center carpet at 10 p.m. Just like the entire project, it was a few hours late, but worth the wait. And in the following days, the SEMA crowd definitely agreed. “Everybody absolutely loved it. And with the polished brakes, big wheels…let’s just say that it’s a huge attention getter.”

You can’t own 120 rides without constantly wanting to play with them. And a year and a half later, Revo is still tweaking his one-of-a-kind Camaro. This time it was some fine-tuning on a chassis dyno: With the twin-screw Lysholm pushing 9 pounds of boost into the L99, the dyno spit out 425 hp and 391 lb-ft of torque at the rear wheels.

So what are the chances Revo will keep modifying this thing? We’d say it’s only a matter of time.