Armed with a stack of magazines, borrowed tools, and a plan, David Daugherty embarks on his first ground-up build with this ’70 Chevelle 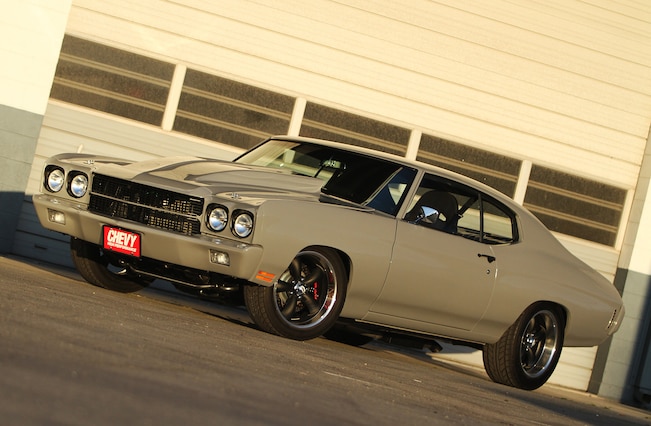 Our first impression of David Daugherty, owner and builder of this '70 Chevelle, was his genuine love for cars, building, and every experience that comes along with it. His 45-month build wasn't easy at all. He sometimes envisioned throwing a hammer at the car, but wouldn't change the experience for anything.

Even if you've never done a frame-off build, it's not hard to picture how much room a car takes up when it's completely disassembled. Many of us, including David, don't have a three-car garage at home to facilitate such a task. Fortunately for David, a body and paint specialist at Hardcastle Auto Body in San Jose, California, shop owner Jim Alves along with foreman Jay Burnette actually liked the idea of him building a car at the shop after hours. David has been working at Hardcastle since he graduated from the Central County Occupational Center's auto body program in high school over 12 years ago. He took on the project by himself, but was incredibly grateful for his friends' help along the way. Both Jim and Jay opened their tool boxes and were there to lend a hand or advice. Even with help on call, this really was a solo build.

It doesn't take long to gain perspective on a build of this scale, David reflects on his struggles throughout. “Building a car is a big task for a team and an even larger task when you're on your own. It is great because you don't have to deal with other peoples' visions for the car, or argue about the order in which things should be done. Being the only person building a car has its downsides, however; there is nobody to blame but yourself. I learned that you have to be 10 steps ahead of yourself, especially when modifying or installing things that weren't there from the factory. The path ahead looks so long and out of reach sometimes, but I forced myself to think of how much I have gotten done, rather than how much there was left to do.”

He effectively built this car twice, once for all the test-fitting before paint and then again after paint for final assembly. Though this was his first ground-up build, it wasn't his first time around a project. He knew what steps to take in order to keep from making major mistakes or working backwards.

David is proud of the Chevelle and so is everyone around him. He knows his family would be proud of him; his coworkers and supervisors admire his ambition and the skills he gained along the way. Friends and family know how much work it took to get so far in short bursts of spare time. David started out reading magazines cover to cover with the dream to someday build a car good enough to be featured. You got it, buddy!

The foundation of a car that's meant to be driven is a reliable engine. David started out with a factory GM 6.0L LQ9. That's an iron-block LS-series engine originally out of a truck. He wanted a strong base to build from. The LQ9s are known for their stout iron blocks and particularly hideous intake manifold setups, so David fabricated an aluminum cover to hide it. He gave it a clean but custom look with the cover next to the Spectre Performance air cleaner assembly. The truck engines also come with an extra-deep oil pan to match the tall chassis so David swapped it out for an F-body pan and added an Improved Racing oil baffle. Exhaust starts with a set of Edelbrock A-body swap headers with a 3-inch tubing system pieced together with an X-pipe, dual Coffin Mufflers, and 3-inch turndowns. GM's crankshaft, connecting rods, pistons, 317 cylinder heads, and valvetrain will keep him happy for now, but we got the impression a supercharger is in the near future plans. To prepare for future power add-ons, David wouldn't go for a weak transmission. He opted for a Tremec T-56 Magnum capable of handling far more torque than he has currently. The aluminum bellhousing made way for an SFI-approved QuickTime scattershield around the 12-inch Monster Clutch Co. Level 2 single-disc clutch. He used a factory GM slave cylinder with Tick Performance's extra-long speed bleeder line to make bleeding easy. The Tilton 7/8-inch bore clutch master cylinder is also from Tick Performance and is fully adjustable. The Denny's “Nitrous Ready” driveshaft with 1350 joints leads to a factory-width Moser 12-bolt. Inside is an Eaton posi unit, Strange Engineering 31-spline axles, and Motive 4.11:1 gears.

David knew this would be the last time he put the Chevelle together, so everything had to be perfect. He started by sandblasting the factory frame, which was in great shape. He went to town boxing the frame and welding in gussets for strength. David even made his own double-sheer transmission crossmember for superior strength. Once all the welding, grinding, and sanding were done, it received a 40 percent gloss black powdercoat. Bolt-on components weren't just off-the-shelf stockers, David took the time to do his own modifications as well as source some of the top parts the aftermarket has to offer. The lower control arms were boxed and reinforced around the lower ball joint, which is a 1.5-inch longer piece from Howe. Uppers are fully adjustable from SPC with screw-in ball joints also from Howe. VariShock single-adjustable shocks and SPC Sport springs can be found between the upper and lower arms. David rebuilt a traditional three-bolt GM steering box with a quick 12.5:1 ratio. The rear also wears boxed lower control arms and adjustable uppers with VariShocks and SPC springs. He used a matched set of Hellwig tublar antisway bars and polyurethane body-to-frame mounts from Energy Suspension.

David isn't an overkill kind of guy, but one who matches components to his needs. He went with a tasteful Baer T4 four-piston caliper front and Iron Sport single-piston for the rear. They clamp 13-inch front and 12-inch rear drilled and slotted rotors. He bent custom brake lines throughout starting from the CPP MCVP-1 master cylinder to each corner of the car for perfect fitment. Wheels are Coys vintage but modern-looking C-5 model. They are 18x8 in the front with 4.5 inches of backspacing and 18x9.5 in the rear with 5.5 inches of backspacing. David took a lot of time and tips from magazines to aid in the perfect fitment with Nitto NT555 rubber, 245/45 and 295/45 front and rear, respectively.

This is where David really rocks. He was 100 percent confident in every move he made on the Chevelle's skin. He started by scraping and sanding every bit of filler, seam sealer, tar, and other non-metallic substances off. Once he was satisfied, it went to Spray Technology in Santa Clara, California, to get sandblasted inside and out. David didn't take any chances with rust or contamination so the bare body went straight from the trailer into the booth for a coat of DuPont epoxy sealer before any bodywork was started. He replaced both left and right side cowl panels, the right quarter-panel, outer wheel housings, rear window housing, and a dozen rusty patches around the body and floor. With the engine and transmission in for mockup, David fabricated the transmission tunnel and finished up mounts for the in-trunk fuel cell. Once that was finished, it was mounted to a rotisserie before going back in the booth for a coat of bed liner over the underside, interior, and trunk. The pretty sheetmetal got just as good of treatment with at least six rounds of blocking before he sprayed the DuPont Cromaz Pro Waterborne basecoat. Don't try and find this color on the shelf, this is a custom secret blend David appropriately named Battleship Grey. He sprayed the same color over what used to be chrome bumpers. All other trim was powdercoated black. David wanted a look that stood out and blended in all at the same time, quite a feat!

The factory vinyl door panels, dashpad, and rear seats were retained to keep the classic look. Scat ProCar Sportsman Series seats replaced the buckets and retractable three-point harnesses keep him and his wife square in their seats. David built a custom panel to house Auto Meter Sport Comp speedometer, tachometer, oil pressure, fuel level, water temperature, and voltmeter gauges where the factory ones were. The center dash was modified to delete the original radio location in order to hide the PCM. A new mount was fabricated under the dash for the Kenwood head unit. It powers three 6x9 speakers, two in the rear package tray and one in the factory front dash location. That would be just enough noise for him from inside the car. He wired everything up with a modern-style American Autowire fuse box and wiring kit made for the A-body.