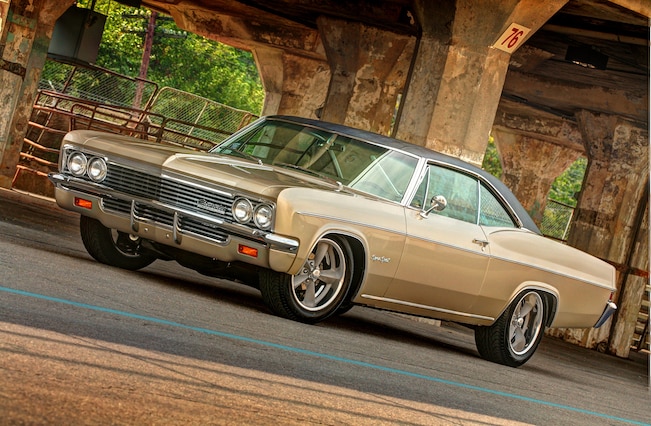 There’s no mistaking a mid-’60s fullsize Chevrolet for anything else. Chevy stylists didn’t play “catch-up” with competing brands, and each model—from the lowest-price Biscayne to the top-line Caprice—was filled with features not found in any other low-priced big car.

The distinctive 1966 styling has survived the test of time, even standing out under two feet of snow two decades later, when Bill Parina recognized the familiar shape. “I used to ride to work with a friend of mine, and it was his neighbors’ car,” he remembers. “I saw it in their backyard and I asked him what they was going to do with it. My friend said, ‘I don’t know—I’ll ask him.’”

Bill’s friend’s neighbor said that he wanted to sell it. Soon after, once the Impala was dug out of the snow, it was in Bill’s garage. An original Impala SS sport coupe, it was one of 900 built with a 230-inch six. It also had power windows—and no heater. Says Bill, “It was from Florida originally, and I’m thinking its first owner was an old lady who couldn’t reach across the car to roll down the windows.”

That six was long gone, replaced by a 327, which didn’t stay for long. “It blew up on me on the freeway one day,” says Bill. Once Bill got it home, he looked for another engine. “A friend of a friend had one for sale, and he told me that it was a 396,” says Bill of the next engine to go into his Impala, which came with a Turbo 400.

It took a little bit of “field engineering” on Bill’s part to install that Mark IV V-8 and Turbo-Hydramatic, thanks to some crossmember re-alignment. “What I ended up doing was spinning the crossmember 180 degrees, cutting off the bracket, and re-welding it on the other side,” says Bill. “It lined right up, except for the exhaust pass-through humps.

That engine served Bill well while he worked on other GM-based project cars. Eventually, it was time for the Impala to get a redo, starting with its engine—which wasn’t a 396 after all. “I found out that it was a low-horsepower 402,” Bill says. “The guy that I sent it to for a rebuild, said that he had somebody who wanted to buy it, and they wanted to pay me more than I paid for the engine and tranny combo. I said, ‘Sure—why not!’”

Bill then looked for another big-block, and found one on eBay. “S&S Engine Rebuilders in Spokane, Washington, had one for sale, advertised as a 427,” he remembers. Before it went east—and thanks to Bill’s friends Frank Gaspare and Chuck Perito—S&S built it to be streetable. “They spec’d out details, like a 9.75:1 compression ratio and a mild cam—the whole nine yards,” Bill says. When it arrived, they tore it down. “Everything checked out really good,” says Bill. “The only thing we did that they didn’t do was we align-honed the camshaft bore. One of the journals was off by .002-inch—not much, but my buddy Frank is a perfectionist, and he said, ‘We’re going to get that honed out, and then we’ll put it back together.’”

When reassembled, Bill took it to Dave Koffel’s engine and race-car-building facility next to Frank’s shop, where it made 436 horsepower and 498 lb-ft of torque.

The body then got its share of attention, to bring it back into its original Body by Fisher shape. Mediablasting revealed lots of small dents, plus rust damage on the underside. “I had to find the rear seat pan in the junkyard, because the front and rear windows leaked, and that rotted out the floor from the inside,” says Bill. “So, I replaced the trunk pan, the rear seat pan, and all four floorpans.” Bill’s friend Chuck hammered out the dents at his Custom Painting Inc. shop in Cleveland, and they got the Impala’s body ready for the two-stage Champagne Pearl Metallic finish seen here.

The toughest part of the project involved the four-wheel-disc-brake system he swapped in. “It was a kit that supposedly fit my car, but the rear caliper brackets didn’t fit,” he says. “I had to do my own engineering, and make my own.” Which he did, with help from his friend Frank and his shop in Huron, Ohio. “He helped me out with that a lot, and we got that all situated.”

It took 18 years of on-and-off work for the Impala to be situated as seen here, which included Heidts 2-inch drop spindles in front, one-inch lowering coils in back, and Billet Specialties’ five-spoke 18-inch MAG-G wheels on low-profile Yokohama Advan ST tires.

Unlike a lot of competitor cars from ’66, fullsize Chevys are still around, as Chevrolet made nearly 1.5 million of them. That also means plenty of reproduction parts are now available. “Back when I started, there weren’t very many (reproduction) parts available,” says Bill. “Now, you can buy just about every single part for the car.”

His advice, if you’re thinking of a mid-’60s big Chevy project of your own: “It’s worth it. They’re a lot of fun to drive.”

And their distinctive styling will turn heads wherever you go.

It started as a TV-show-inspired, father-and-son project, then became this show-stopping 1966 Chevrolet Impala, brought to life by Big Oak Garage.