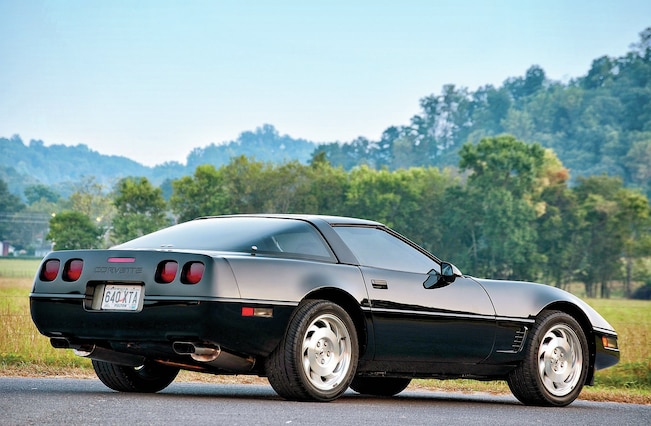 When the C4 Corvette debuted for 1984, it was a fresh take on a well-established brand. Looking back, the progression is quite astonishing, but this particular Corvette, owned by Chad Thomas, proves that you don't have to have an LS-based engine to make big horsepower. Chad's C4 relies on an LT1 for power, and uses a period-correct ProCharger to create tons of horsepower. It's an old-school setup that creates new-school horsepower, and it all happened behind the doors at Speed Engineering in Cleveland, Tennessee.

Chad got his start with Corvettes many years ago, behind the wheel of a 1971 four-speed convertible. He drove it while attending the University of Georgia, and it was an on-going project with a few modifications to the original 350ci engine. From there, Chad stepped up to the C4 platform, owning a number of early C4s, including an '86, an '87, and an '88. Chad decided to further his education, so he sold off the toys, but he bought a '95 Corvette after he graduated and got a new job in 1999. At the time, the LT1-powered Corvette wasn't too far behind the new C5 platform, in terms of horsepower. But the C5 Z06 came out, and Chad wanted to keep up with it.

At this point, a personal friend from college, Jeff Nance, had begun modifying LT1 and LS1-powered cars at his Speed Engineering shop. Chad decided to boost his LT1 with a ProCharger, and a mild camshaft upgrade, so Speed Engineering installed the parts and tuned it to 427 horsepower at the rear wheels through stock mufflers. Chad enjoyed this setup for 25,000 miles.

Chad Thomas’ ’95 Corvette looks bone stock, but can twist the dyno dials past 500 rwhp, thanks to its upgraded (and ProCharged) LT1.

Then the C6 Z06 came out, causing another urge for more power. That's when Chad decided to get a little more aggressive with the setup, without ditching the parts that were already installed on the car. Speed Engineering was in charge of making the most possible horsepower with a 20-year-old engine and 20-year-old supercharger technology.

Starting from square one, Speed Engineering took the LT1 block and punched it out 0.030-inch to create a total displacement of 355 ci. The Trick Flow aluminum heads feature a 21-degree valve angle, as opposed to the standard 23-degree angle. This, in combination with the 192cc intake runners, creates a more direct path for the air/fuel mixture to flow through the heads. The camshaft is a Comp Cams core with a custom grind determined by Speed Engineering. It's designed to work perfectly with the air-to-air-intercooled ProCharger P-1SC, while being mild enough to work with the runner length of the original LT1 intake manifold. The fuel system consists of an Aeromotive 340-lph in-tank fuel pump, while the original pressure regulator and fuel rails delivery 93-octane fuel to the 60-lb/hr injectors.

Chad’s LT1 was bored out 0.030-inch, and treated to Trick Flow’s 21-degree smallblock heads and a custom-ground camshaft by Comp Cams with a profile developed by Speed Engineering.

The old-style straight-vane ProCharger features a shared drivebelt, which means it is limited to the six-rib serpentine belt that also drives the alternator and power steering pump. The lack of water pump on the belt drive (LT1's use an electric water pump) actually reduces the amount of contact patch on the crankshaft pulley, so belt tension was a huge factor in getting the desired horsepower out of this LT1. Speed Engineering used a custom tensioner and idler pulley to make it work. Eventually, Chad plans to upgrade to the curved-vane ProCharger P-1SC-1 unit, but Jeff wanted to find the limits of the old ProCharger before making the switch.

Backing the supercharged LT1 is the stock Corvette ZF6 six-speed manual transmission, which features a Speed Engineering Dual Smooth LT4 clutch kit that utilizes the stock dual mass 39-pound flywheel. Although the car would hook up better on a set of drag radial tires, Chad plans to keep the street-grade radials that are on it now, sized at 255/45R17 up front and 285/40R17 out back. The stock C4 wheels give this Corvette a sneaky appearance, one that would leave most Z06 and ZR1 owners in a world of confusion after a friendly traffic light drag race.

Other than in one that’s been stored away since new, when was the last time that you saw a cabin this nice in a C4—and one that’s driven regularly, to boot?

Aesthetically, the Corvette appears to be completely stock. The original black paint is in great shape, and the original interior is still intact after 20 years of use. The car fools a lot of people, even though the exhaust note is a bit more aggressive than a stock LT1. It's a great sleeper, and Chad says, “The power is more than I expected. The car feels like it has more power than the dyno graph shows.” This seat-of-the-pants feeling is created by the car's excellent torque curve, which Jeff Nance attributes to the perfectly matched components and many hours of fine-tuning on the dyno.

In the end, this bad-in-black C4 coupe is ready to hit the streets and hurt some feelings. It packs a big punch, and will easily crest the 600 horsepower mark when Chad decides to upgrade the supercharger. For now, he's enjoying the driveability of this combination, which gets high 20s fuel mileage on the highway, with enough grunt to make waste of the rear tires anytime the skinny pedal hits the floor. Speed Engineering tuned this technological dinosaur to be on the same page with today's modern Corvettes, with plenty of room for upgrades. Chad's long-term relationship with this '95 Corvette continues to get better, and the old LT1 continues to crank out big time power.

On Speed Engineering’s Dynojet, the ’95 put down 541.9 horsepower and 530.9 lb-ft of torque to the rear wheels. These numbers are at 10 pounds of boost, running 93-octane pump gas. Jeff Nance tuned the setup with LT1 Edit software.