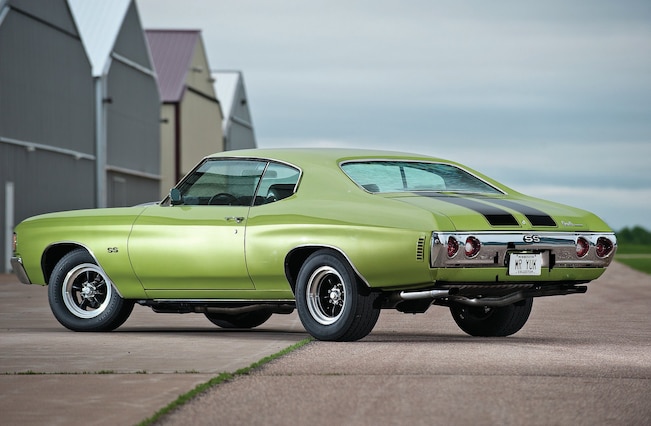 The one sure thing about a first car is that it tends to stay with you forever. You learned with it. You grew with it. Maybe it was good car. Maybe it was a flop, a troublemaker, a problem that wouldn’t start at the most inopportune moment, or maybe several of them. There you are at the drive-in (remember them?). The feature ended a half-hour ago and now it’s cold and raining. You’re contorted, crouched under the hood trying to set the points with a matchbook cover by the flickering flame of a Zippo, hoping your litany of curses will hasten the process. Your date is leaked. You’ll be in trouble later. An amusing anecdote now and your feelings about it encompass a lot more than those embarrassing but character-building moments of youth.

Any car lover’s history is a collection of such incidents and they often bound off the memory pages like lunatic rabbits. And like something out of a B-movie script, Mike Sterling met his future spouse Laura at a street race in 1993. Things spiraled upward from there.

Mike’s ride was a black ’72 Chevelle that he’d had since high school. They towed it to those clandestine contests with an electric pea green ’76 Suburban and a ratty trailer. And according to Mike, Laura was usually faster than he. Then they got a little crazy. They sold the ’72 and gravitated towards a ’66 Chevelle with the idea of making it a “drag car.” To cement their deal, they got married. They still have the 3,100-pound street-legal ’66, which makes 1,250 horsepower and has run an eye-peeling 8.02 at 166 with closed exhaust and DOT tires. “It will run a 7 by the time this article prints,” Mike stated as a matter of fact.

After a while, the risky street racing bloom began to wilt and they wanted to go legit. They found an Oasis Green ’72 Chevelle and worked it over with the proper badges, hood, grille, and stripes, making it look like an SS that never existed. They called it Mr. Yuk, which was a green frowning face, a symbol for poison control.

Mike: “Since Mr. Yuk had the original color of Oasis Green, we knew he had to be painted something close to that. A friend agreed to paint the car. Laura and I had a distinct memory and a few faded photos of our ’76 ’Burb … that was the color we wanted.

“At this point, we decided to throw some badass under the hood. Since the biggest part of the car hobby for me is to build motors, we decided I needed a challenge. A pump-gas big-block, old-school flat tappet cam, 4150 Holley, and more than 650 horsepower. TJ from TNT Specialties gave me the super cool vintage Weiand valve covers that just needed to be used. It turned out we couldn’t make the 650 number … the motor made 686 hp at 6,300 and 603 lb-ft at 5,000 rpm!” Umm, at 3,450 pounds, this combo will still offer bottle-rocket acceleration.

And as a retro build, the Chevelle didn’t need anything more than a clean, full interior with a stock appearance. However, Mike deviated a tad with a very modern analog instrument cluster from Dakota Digital, one of the first units to come off the line with a vehicle speed sensor (VSS) that adds electronics to a mechanical speedometer.

The Sterlings are associated with the ADRA, MSRA, and GSTA and they attend local shows as well and abuse macadam at least twice a week. “Laura and I have taken Mr. Yuk on a few long trips, and on nice days he gets us to work and back. Whenever the opportunity presents itself we always do our best to beat up on a few Fords.” The Sterling’s rallying cry? ”Keep the old iron on the road. Stock or mod, it’s all cool to enjoy.”

Engine man Mike did what he does best. He began with a 454 block and fixed it with a 4.310-inch bore and a 4.25-inch stroke to yield a displacement of 496 ci. Machine work (balance, deck, and line hone) was the province of Bryan Hansen at R&R Performance in Spring Lake Park, Minnesota. The rotating assembly includes an Eagle crankshaft, JE 10.35:1 pistons (circled by plasma molybdenum rings), and 6.385-inch Eagle connecting rods. He sealed the bottom end with a Milodon pan and related oil pump. A Cloyes True Roller timing set connects crankshaft with the COMP flat tappet camshaft (0.635/0.637-inch lift, 292/262 and 308/270 degrees duration at 0.050). The grind accommodates a 4-7 cylinder exhaust swap and the valvetrain consists of Reher-Morrison pushrods and COMP Pro Magnum roller rockers. Mike capped the short-block with Pro Comp aluminum castings that he’d race-ported and corrected the chambers to the bore. They’ve been fitted with 2.25/1.90 Manley Race Flow valves retained by COMP 924-16 springs. Pump gas fuel is metered by a Holley 1000 HP carburetor on an Edelbrock Victor intake and sparked by an MSD E-curve distributor. Hydrocarbons exit via Hooker Super Comp 2-inch primary pipes leading to a mandrel-bent 3-inch system that Mike infused with a Heart Throb kit. He used ARP fasteners throughout. Master Transmission in Rosemont, Minnesota, fitted the Turbo 400 transmission with a 9-inch diameter 4,000-stall A-1 converter, a manual valvebody, and a Hughes aluminum deep pan. A 3.5-inch moly steel propeller shaft twists the 3.55:1 gears in the narrowed (4 inches) Alston FAB9 axle.

Nothing exotic here, just a basic high-performance prep including OE coil springs, QA1 adjustable dampers, and an SS antisway bar. In the rear, Mike swapped in Hotchkis springs and another pair of QA1s. Steering and spindles are stock.
5/13

Looking as hushed and pristine as if it just came off the showroom floor, the pin-neat gut in the Chevelle is curiously refreshing and says that full-on custom work needn’t be mandatory in every enthusiast’s car. Hot Rod Factory in East Bethel, Minnesota, supplied the upholstery, headliner, and the side and door panels. Mike spins a factory SS steering wheel and changes gears with a stock horseshoe shifter. Notice how well this old Chevelle accepts those modern Dakota Digital gauges.
10/13

The Rust Belt never sullied this California original, making the media blast to bare metal process that much easier. Al “Hardware” McAloney in Ramsey, Minnesota, painted the car in pieces. Prior to the final decision on the exact color, he sprayed about 30 test panels. One day he called the Sterlings and said he probably had the right hue of Yuky Green because he almost puked when he opened the can. To complete the scheme, Al applied factory SS stripes and Mike and Laura were in business.