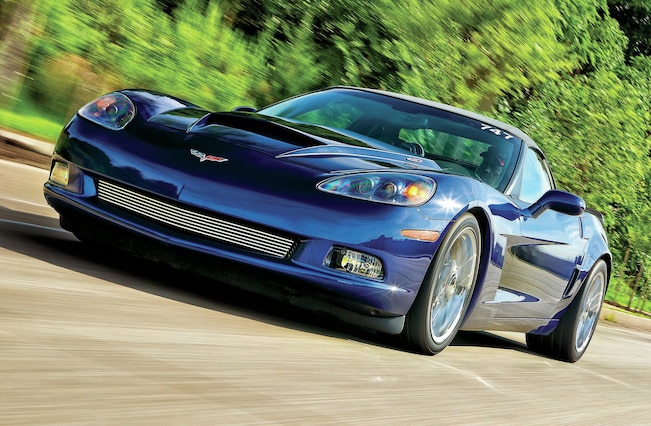 When it comes to upgrading a C6, many late-model Corvette owners look to improve their Vette's handling, as well as its straight-line performance.

In Gene Autry's case, he's chosen the straight-ahead route to improved straight-line performance on the quarter-mile. "I'm old school," he says. "I like big cubic inches and naturally-aspirated engines."

Years ago, Gene owned a Vette that he raced in the Super Comp classes, but health problems put him behind the wall. "I sold it back in 1995 because I had a heart attack at the dragstrip, so I got rid of the car," he recalls. "I went a couple years without a race car, and then I purchased the '06 when it was three years old."

He found a gently-used '06 droptop, one with just 3,000 miles on the odometer. "It had all the bells and whistles on it, with a six-speed automatic that even my wife could drive," he remembers. "It was that desirable Le Mans Blue with a light gray power convertible top and interior, and it caught my eye instantly.

"It was love at first sight, and the rest is history."

Not only did Gene fall in love with—and buy—this C6, he once again had the need for quarter-mile speed. "I started going back to the track, and I said, ‘I'm going to build another race car,'" he says. "Then, I said, ‘I've got a great platform right here,' so I started with the street car.

The '06's stock 6.0-liter, 400-hp LS2 was a good performer, but, to an old-school enthusiast like Gene, there was no replacement for displacement. Out came the 6-liter LS2, and in went a stouter-than-stock 7-liter LS7. "Lingenfelter built the short-block, and it's got a Callies ‘DragonSlayer' crank in it," says Gene. "It's an all-forged engine, with JE Pistons and Total Seal rings."

Also going in the LS7: a Katech "Torker" camshaft, plus a Katech oil pump and timing chain. For cylinder heads, he went with a pair from GM Performance. "I didn't need much done to them," says Gene. "I just cleaned them up a little bit. What I like about them are their stainless steel valves." Between those heads, a FAST 102 intake went on, along with a polished Nick Williams throttle body.

To help put the LS7's 500-plus horsepower on the pavement, Gene swapped out the original RPO Z51 shocks the car was built with for a set of QA1 adjustable coilovers. At each corner, he installed M&H's Racemaster drag radials on modular aluminum CCW wheels.

Before long, Gene had to install one item in order to keep his C6 strip-legal: a six-point rollcage. "I had problems before, when it was running too fast," he says of when he ran it before safety rules mandated that he add the structure in order to compete.

And just how quick was this 7-liter, automatic-transaxle-equipped, fully-streetable C6 on the 'strip? "It went 10.28," he says of his best quarter-mile time. That was done, by the way, without nitrous oxide injection, or forced induction like a supercharger or turbocharger.

But Gene plans on going even quicker, when he returns to Cecil County (MD) Dragway and Atco (NJ) Raceway this spring, the latter where he's won their Corvette club shootout event. "As we're speaking, the engine's out of the car getting freshened up," says Gene of the off-season upgrades that he treated the LS7 to last winter. "I'm putting a set of Air Flow Research heads on it, and I'm putting another camshaft in it," he notes. "It should make a little over 600 rear-wheel horsepower.

Running in the 10s in the quarter-mile meant a six-point rollcage had to go in, to stay competition-legal.

That might be the limit for what the '06s transaxle can handle, even though he's upgraded it. "It's got a 6L80 automatic in it, and my tranny is stone bone stock," says Gene. "I've read up on them—they won't take much torque over 600 lb-ft. The clutch pack in them just isn't strong enough." The cure, he says, is the beefier, old-school Turbo 400—but adding one of them would take some major floor work to install. "You would like to put a Turbo 400 in, because it'll support 1,000 foot-pounds of torque," he says. "But that's a tunnel modification, a torque tube modification, but it's the only way to go, if you want to make some serious horsepower without any driveline breakage."

That's the big piece of advice that he has for anyone considering upgrading their street-driven, automatic-equipped C6 for the 'strip.

Meanwhile, Gene enjoys his dual-purpose, headed-for-the-nines, LeMans Blue C6. Says the retired truck driver with a big laugh, "I drive it to work every day!"

If gene’s off-season upgrades to his LS7 put the ’06 in the nines on the ’strip, he’ll need to get a new plate!