1966 Chevrolet El Camino - The SS That Never Was 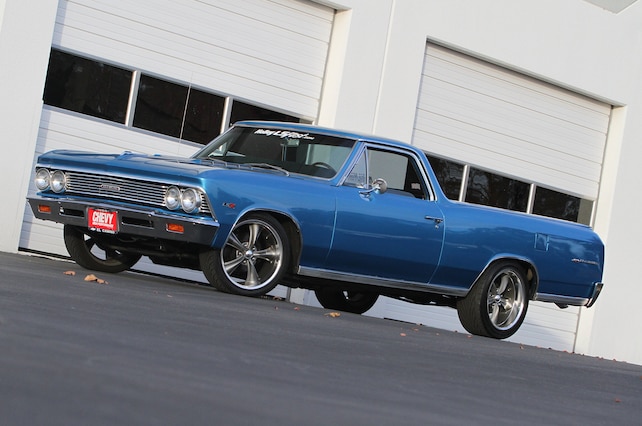 This ’66 El Camino project was originally purchased by Michael Barnes’ father-in-law in the late-’90s. The paint and bodywork were already handled and the interior was upgraded with SS components. The plan was to drop in a radical 383ci stroker with a Muncie four-speed and call it done. The combo did make its way to the dragstrip for some low 11-second quarter-mile runs and even got to lay down some laps at the famous Laguna Seca road course. Beyond that, the Elco was left alone for sunny days with limited road duty.

Fast forward to 2005, Michael and his father had a ’70 Elco they were working on, however, they were convinced by Michael’s wife’s father to modify the ’66 instead. Unfortunately, without warning, Michael’s father passed away. Knowing that it was his father’s wishes to complete the ride, he began the long journey to the final creation you see here. Their dreams were big: LS power, A/C, corner carving suspension. With a new plan on paper, he enlisted Santa Rosa Resto Rods for the build.

With the plan underway, he set his goal to attend Holley’s LS Fest in Bowling Green, Kentucky. In September of 2013, Michael, his father-in-law Jim, along with his best friend made the 5,083-mile round trip; the modern-day powerplant awarded them with an average of 20 mpg, and no trouble on the road. If nothing else, it was rather uneventful and allowed them to focus on the drive and the incredible scenery.

Michael went on to tell us “The car has been a lot of blood, sweat, and tears but a huge joy to build and drive. I could not have done it without the help of my family and friends who have helped me along the way.” Well said, Michael, very well said.

Who takes a completely finished car and rips the motor out? This guy does. He had a 383 stroker that produced over 500 horsepower then took it out for a stock, smaller engine. Bigger isn’t always better, and this swap proved it. Michael found a 2003 LQ9 (6.0L iron block LS-series) to put in its place with Chris Alston engine mounts. It may not produce huge horsepower numbers, but it would make the El Camino see a whole lot more miles. The engine’s internals were left stock, but the truck-style intake made way for an LS6 intake with a custom air intake tube crafted from a Spectre inlet. Santa Rosa Resto Rods customized an F-body oil pan to clear the steering and crossmember as well as a custom coil mount to keep the coils off of the valve covers. This allowed the Chevrolet valve covers to be exposed for a cleaner look. Michael chose March Performance’s billet front drive kit to clear this front-steer A-body. Sanderson shorty headers and a 3-inch exhaust system with Flowmaster Super 44 mufflers complete the bolt-ons for this one. The Muncie four-speed he had probably would have held up, but the perfect mate to a modern engine is a modern transmission. The salvaged LQ9 didn’t come with a transmission so Michael got a T-56 six-speed manual from American Drivetrain. They supplied the shifter, hydraulic clutch system, and driveshaft to make the swap happen. He used a McLeod twin-disc clutch to mate the pair. The factory 12-bolt got a makeover with posi traction and a set of 3.73:1 gears.
4/14

Just because it sort of looks like a truck, doesn’t mean it needs to perform like one. Michael didn’t go nuts in the suspension department, but he didn’t need to in order to make it fun to drive. He planned on long trips with this one and didn’t want to make it ride like a race car. He installed Eibach lowering springs front and rear with Edelbrock shocks in the front and Air Shocks in the back. The factory 10-turn lock-to-lock steering box got the boot for an AGR billet close-ratio one. A beefy sway bar took over front control and polyurethane body mounts and bushings keep the front end tidy. Michael didn’t ignore the rear and boxed the trailing arms for increased strength.
5/14
6/14

When Michael’s father-in-law originally bought this ride, it was already painted Rainbow Warrior Blue. The body sits in its factory configuration with all steel panels and bumpers. One modification they did make was adding fender emblems boasting the LS powerplant.
7/14

In Michael’s eyes, the closer to the factory look, the better. This car didn’t come with a tachometer, which is pretty much mandatory these days. The closest thing they could find to an original one is the classic Sun Super tach. It looks right at home along the mile-wide speedometer in the dash and the factory clock in the console. Michael even used a Custom Autosound head unit that mimics the look of a classic radio but uses an iPod as audio input. The modern A/C is controlled by the factory levers as well.
11/14

Choosing wheels can be as excruciating as choosing the shine; it influences the look of the car just as much, if not more. So when it was time to choose a wheel, Michael thought long and hard and ended up choosing Boss Motorsports 338 wheels. They fit snuggly, outfitting the Elco with 18x8 up front and 18x9.5 out back. Tires of choice are Toyo T1-R, using 235/40 and 275/45 front and rear.

After he found out his first El Camino was going to be a nightmare, Erich Monteith found and purchased a second 1966 Chevy El Camino and was ready to enjoy it. - Super Chevy Magazine

Read about how to install Billet Hood Hinges as they get installed on a 1966 Chevrolet El Camino only at www.chevyhiperformance.com, the official website for Chevy High Performance Magazine!

Our 1966 Chevy El Camino gets some much need body work. The guys at Rubio's Autobody went to work fixing every panel and installing a new hood from Original Parts Group. Only at www.chevyhiperformance.com, the official site for Chevy High Performance Magazine

Follow along as we test fit a Big Block with a Turbo 400 transmission combo in our 1966 Chevy El Camino project car, only at Chevy High Performance Magazine.

Read these performance questions & answers with a question on a Chevy 350 small block and a 1966 Chevy El Camino, only at Chevy High Performance Magazine.