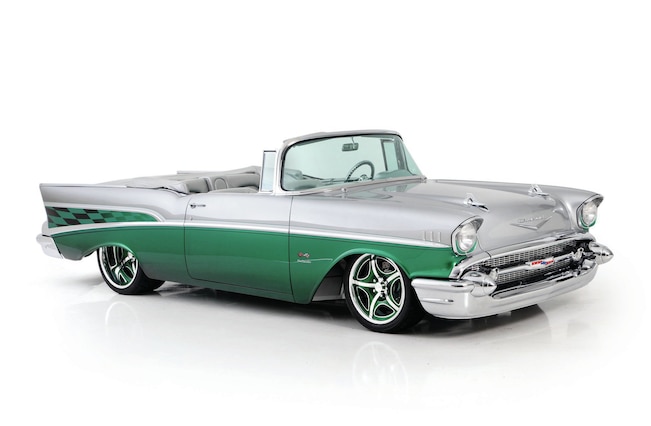 The car you see here started off as a simple paintjob that came into the Kelly and Sons (“The Crazy Painters”) shop. The owner of the ’57 wanted it shot a Money Green and Titanium Silver two-tone. The crew stripped her down, straightened her out, and Mitch Kelly, the head painter, gave her a fresh coat of PPG water-based paint. Even though Kelly and Sons is a paint shop, the staff is a group of true gearheads, so some mechanical work is not outside their wheelhouse. The customer keyed in on that and started bringing in parts from companies like Danchuk, Hellwig, Soff Seal, Hydratech, Lokar, ididit, and so on.

This dropping-off-parts thing continued for a few months, until one day when the convertible’s owner was in the shop, and struck up a conversation with a different customer. By the end of that discussion, the ’57 changed hands. The new owner had more expectations of what the Tri-Five should be. He wanted the car to have a little more custom on top, the underside to be as nice as the exterior, and he wanted the performance of a late-model car. Mitch and the crew took the body off the chassis and flipped it over to finish the underside. The new owner ordered up an Art Morrison chassis to slip under the car. Mitch and his crew finished all of the new owner’s requests, and it was supposed to be taken away for interior and wiring.

Then, the fully painted Bel Air just sat. Mitch would call once in a while to remind the new owner about his car. This went on for more than a year, until Mitch could no longer look at the half-finished product. He picked up the phone one more time, but instead of a reminder, Mitch threw out an offer. After a little haggling, a deal was struck and the once-forgotten convertible had another new owner—Mitch Kelly.

With a motivated owner, the car was put on the fast track to getting finished. What better way to motivate yourself to finish a car quickly? Commit to taking it to SEMA. And that’s what Mitch did. He told his contacts at PPG about the car, and they wanted it for their booth. Mitch called in a few favors, and with the help of the Kelly and Sons crew, Ron Mangus, Lucky Costa, Dave Willy, and a Tri-Five guru named Fuzzy, the car was finished and made it to SEMA.

Like we stated before, the car is sitting on an Art Morrison GT Sport chassis, but there is more to that. The entire chassis, along with the rearend housing, was smoothed and painted the same silver as the exterior. QA1 coilovers are used to hold the weight, while big Wilwood brakes are employed to slow her down. Strapped to each corner are Raceline Smuggler rims wrapped in Toyo R888 rubber, 18s in front and 20s out back. Mitch added the Money Green to the centers of the rims for a little more continuity. Some tub work was needed to make the massive 315-wide rear tires fit, but other than that, the body is pretty much stock.

Sitting in front of the smoothed firewall, in a sea of polished billet parts, is a Chevrolet Performance Ram Jet 502 that’s good for more than 500 hp. Art Morrison headers and Borla mufflers give the Rat a deep, powerful tone. The entire exhaust system was coated in a new process from Jet Hot that left the pipes a rich green hue. A polished CPP hydroboost brake master, EMS billet parts, Vintage Air compressor, and Mattson custom radiator round out the engine compartment. The big-block is backed by a 700-R4 that runs down a PST carbon-fiber driveshaft to the 9-inch rear end filed with Strange goodies.

The dash has been smoothed, leaving only the Dakota Digital cluster, ididit column, Lokar pedals, and Raceline steering wheel in view. Ron Mangus took on the task of creating an interior that would fit with the two-tone exterior. Green and gray leather was used to expertly cover the Lexus SC430 seats, door panels, and handbuilt console. Ron even took the time to hide a complete Kicker audio system that has enough power to drown out the engine if needed.

Mitch and the entire crew at Kelly and Sons Crazy Painters did an excellent job taking over this project and making it their own. Mitch says he really enjoys driving it with the top down and letting the big-block sing. It must be a blast to catch people off guard as this show car is able to out-corner them when the roads get twisty.