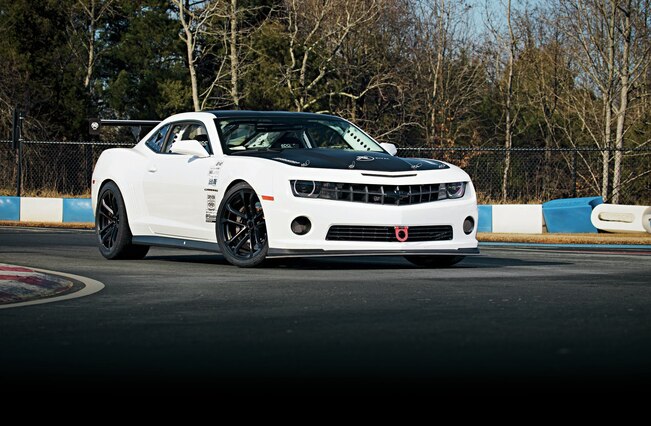 With the rebirth of the Camaro hitting the streets in April 2009, the fifth generation of GM’s most popular muscle car was an easy target for the aftermarket to load their guns with numerous performance and styling upgrades. While many took shots, some were successful – some, not so much. The attractive, yet aggressive body style and industry-familiar LS powerplant made for ripe pickin’s. And while the factory, consumer-grade suspension is decent, there’s room for improvement. Unfortunately, the rat race to be the first to market with product only increased the chances of compromised quality.

With Detroit Speed Inc. specializing in aftermarket performance suspension products, the company’s owners, Kyle and Stacy Tucker, just sort of stood back and waited for the proverbial smoke to clear before attacking Chevy’s re-entry into the muscle car world. They made absolutely sure the market was there before a single control arm was engineered. Fortunately, the sales numbers proved the late-model Camaro to have real staying power, so DSE’s engineering team got busy developing parts designed to turn a decent performing Camaro into a great performing muscle car.

Kyle picked up this ’12 2SS Camaro, formerly a BFGoodrich test car used to help launch the COMP2 tire. The car had been hammered on road course demos all over the country. With only 2,200 miles (admittedly very hard miles) on the odometer, Kyle purchased it with the intention of using it as a test mule for DSE product development.

“When I saw the GM SSX concept car designed by David Ross and built by Pratt & Miller, it influenced me to take this build in a similar direction,” tells Kyle. “I also told the folks at BFG that I would continue to keep up with the tire-shredding abuse it had seen while in their hands.”

Kyle and the DSE crew baseline tested the car before bolting on prototype suspension parts, but early product testing revealed that they needed more car to punish and develop the parts correctly.

Kyle: “With some initial testing done, we made good progress but decided to put a more aggressive plan into place. If something wasn’t functional, it came off the car. If it weighed a lot, we cut it off the car. The intention was to build this Camaro as a no-nonsense, barely street-legal, race-ready hot rod. We were making good headway and having tremendous success with the new parts, but we needed a way to condense testing. That’s when we decided to enter the car in the One Lap of America. We couldn’t think of a better way to get a good amount of seat time, cover tons of street miles, and get it out on road courses all over the country.”

So, the driving duo of Kyle Tucker and DSE engineer Ryan Mathews grabbed the Camaro, hit the road, and tallied up 4,000 road miles and 20 track events in just eight days, all on a fresh build with prototype suspension parts. Talk about a “shakedown run.” Their enthusiasm for the unknown turned out to be a great experience for two reasons: they learned a lot about the integrity and functionality of the new parts, and those guys had more fun in eight days than most experience in eight years.

On top of gathering up useful data, the duo took Second place in the SSGT2 Big Bore class. Not bad for a car built in just 80 days.

A C&R Racing oil cooler and aluminum radiator keep engine temps in check, while heat and fumes escape through a set of Jet-Hot–coated Stainless Works 1 7⁄8-inch headers. A Stainless Works 3-inch crossover pipe and chambered exhaust system attempt to dampen the fury exhibited by engine’s 700 horsepower and 650 lb-ft of torque.

With the horsepower department covered, the obvious in-house suspension parts would consist of product developed by the DSE engineers. Up front, GM spindles work in conjunction with DSE coilover struts and springs, which are damped by adjustable JRI cartridges. DSE camber plates, antiroll bar with aluminum endlinks, and caster kit complete the ensemble. Out back, the recurring “adjustable” theme continues with DSE adjustable lower control arms, trailing arms, toe links, and antiroll bar with endlinks. The collaboration works gracefully with the adjustable JRI shocks to ensure maximum lateral adhesion to the road.

It’s no secret that weight is an issue with the fifth-gen Camaro, especially for those looking to scavenge all available performance. With that said, the DSE crew gutted the cushy SS interior in favor of race-only necessities. A custom-built DSE rollcage and a set of black Sparco Evo seats and Schroth six-point harnesses populate the now-seemingly cavernous cockpit. The race-inspired theme continues by way of the DSE aluminum door and side panels, carbon-fiber false floors, shifter, and Sparco 383 steering wheel. The factory GM quarter-windows and rear glass were replaced with 5-Star Lexan. An Auto Meter LCD Race Dash and a bevy of switches populate the custom-built carbon-fiber dash panel. A Vintage Air Gen II heater/defroster keeps the windshield free of moisture.

Michael Neighbors and Ted Dobkowski took over the exterior and massaged the body before dousing the fifth-gen in a ghostly shade of PPG GM White offset by the black-wrapped hood and solid roof panel. Stylish yet functional performance nuances include a front splitter kit and rocker panels borrowed from a fifth-gen 1LE. Less subtle yet more functional is the Crawford Composites Grand-AM rear wing protruding through the Seibon carbon-fiber decklid. A Pratt & Miller rear wing mount and brackets bolt it to the frame.

Reflecting on the build, Kyle coyly admits, “If I had the chance to do it all over again, the only thing I’d do different is start building it 80 days sooner so we would have had twice as long to build it. The guys at the shop worked on it mostly after hours so we didn’t disrupt our day-to-day business, but we really had a blast putting this car together. We definitely have the best people in the industry.”

Once all was said and done, DSE took a basic ’12 Camaro SS and transformed it into a no-nonsense, Trans-Am–style, late-model hot rod built to perform at the highest level at any road course or autocross, yet still able get away with driving on the street when necessary. With that said, this Camaro is an absolute monster, or as Kyle calls it, The White Monster…

Kyle wanted to personally send a shout-out to the amazing cast who helped make this build happen.