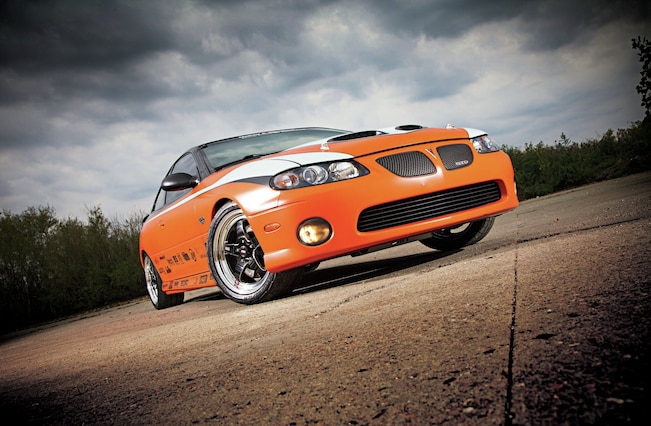 While the actual brand is no longer being actively produced, the heart of the Pontiac culture with its diehard fans is still beating quite strong. Spanning multiple generations of body styles and beloved owners, the passion for Pontiacs is not going to leave anytime in the near future. Those who actually own and drive a piece of the now no-longer brand often take up aftermarket intentions to connect the classic performance to the more modern, LS-powered models. Each fan has a different vision of the perfect combination, and all have horsepower on the checklist.

With fan bases and owners spanning all over the world, you can still find a Pontiac, just about anywhere. One has been located, and it is ready for an introduction. Sitting closely outside of Chicago, Illinois is the little town of Grant Park. While the chances of hearing about Grant Park when compared to the celebrity Windy City are somewhat slim, Wally Olczak’s outstandingly bright orange GTO might be better known. If not, don’t worry. Just hold onto those hats, as a hurricane of Pro-Touring Pontiac is headed your way.

Following the favoritism of many car guys, Wally has had the opportunity to have his own fair share of horsepower throughout the years. His quaint driving history collection consisted of a 1966 GTO, 1989 Formula 350, 1977 Firebird Formula, and a 1996 Z28. His newest chariot shares the name with his ride from 1966. Yeah, it’s another GTO. This time around, his beautiful GTO has the large 6.0-liter LS2 sitting beneath the hood, and like all of the rides featured in GM High-Tech, it’s not stock. It’s loud, proud, and ready to race.

Wally’s wish was fulfilled in 2011, when he proudly purchased his 2006 Pontiac from a friend who was moving out of the country for work. Originally, the GTO was red, but it has since been wrapped in an unmistakably bright shade of orange, with accompanying silver and black accents. If you’ve traveled to Holley LS Fest recently, you may recognize the outstanding orange, as Wally has created his own whirlwind by competing in multiple Pro-Touring classes, as well as the Optima Ultimate Street Car Invitational.

Sure, the LS2 packs some factory punch, but Wally wanted to make a few changes before entering. In order to amp up the stock power, Wally adopted an aftermarket mindset, and started with the main Pontiac power plant under the hood. Raymond’s Performance and Norris Motorsports helped out with the engine adaptations, starting with the COMP Cams hydraulic cam. From there, Landspeed Development built a set of aluminum LS2 heads, and the result included stainless intake vales, and exhaust valves. The rocker arms were still kept stock, but a COMP Trunion Kit was added to ensure solidity.

On the air-fuel side of the equation, a Fast 92mm was added, grabbing air from a connected Spectre cold air intake. From there, the not-so-stock exhaust consists of an ear pleasing pair of Dynatech headers, combined with a Magnaflow muffler. Needless to say, the orange GTO embodies the sound of its elders, paying tribute to its pleasingly loud muscle car grandparents. With everything buttoned up and bolted down, it was time for Wally and his performance Pontiac to strap down onto the dyno. The entire engine package was then tuned by Mike Norris from Plainfield, Illinois, spinning up a superb 457.9 rear-wheel horsepower and 437.8 lb-ft of torque. Not bad, Wally!

Now that the GTO could seemingly compete anywhere on the Pro-Touring map with the added horsepower, the very nature of the events requires more than just straight-line slingshots. Consequently, it was time to move underneath to the suspension. Before tearing into the suspension’s components, Wally said that the GTO “handled like a dump truck.” With that being said, Pedders Suspension products were then utilized throughout the components refresher, and not wanting to plow through corners, the entire suspension was rebuilt, starting with the control arms, struts, and bushings. From there, coilovers were implanted, and adjustable sway bars were swapped in. From bushings to bars, Wally’s wild GTO was starting to become the completive Pro-Touring chariot of his dreams, going from lazy truck style handling, to “predictable and Corvette-esque.”

The suspension upgrades would seemingly supply countless support, giving the GTO the added reliability and performance needed time and time again, in any Pro-Touring competition. Not wanting to leave anything out, the rear end was mostly kept in its stock form, but with the addition of stronger G-Force axles. Ready to fight, the orange wrapped GTO could peel out properly, and grab all of the available traction. Speaking of traction, Wally widened the contact patch with a set of BFGoodrich Rivals wrapping Weld RTS wheels, and man, does it look good!

When Wally is in the driver’s seat sitting at the tree, or gearing up for an outstanding autocross run, Wally can rely on the added horsepower and suspension components to put down the perfect run. When the light turns green, those sticky tires grab every time, and Wally can climb through the engine revs, reaching for the Hurst shifter on his stock T56 transmission, before pushing in the Centerforce Dyad clutch, and slamming back another gear to send him further down the track.

Also while on the track, Wally relies on the custom roll cage to keep him confined within the GTO’s body, should there be an incident. Before each run, he straps himself into the snug Recaro seat with his Ridetech five-point harness, taking every safety precaution seriously. That racing harness setup also keeps Wally from smashing into the windshield when he stomps on the upgraded brakes, featuring massive six-piston Wilwoords upfront. The interior is both safe and eye pleasing, sporting black and grey tones, connecting the inside colors with the outside wrap job, for the fully competitive look.

There is a lot to talk about when Wally pulls up in his GTO, but when asked what he likes most about his hooked up GTO, Wally says he loves the “comfort, power, reliability, and handling.” Understandably, as his Pontiac can withstand multiple track competitions, yet, is capable of driving back home when the day is over. Really, that’s what it’s all about. Pro-Touring style racing requires multiple types of car characteristics, and tests the car’s component and driver reliability throughout the event. With the upgrades, Wally can sit happily in the driver’s seat and stomp on the throttle, knowing that the power to modification ratio is perfect!

Whether driving around the Windy City or around the autocross track at Holley LS Fest, Wally’s GTO has the words “modern classic” written all over it. Sure, it may be bright orange, but why not? Each Pontiac fan will have a different vision of the perfect project. However, they all have the same few characteristics, mainly horsepower and brand name. Wally’s was a Pro-Touring Pontiac GTO. Who knows, maybe one day the LS2 GTO will become as sought after as its older family members. Either way, we’re sure Wally’s could currently be considered collectable!

Owner Jack Erickson shows us the ins and the outs of this 2006 Pontiac. A homebuilt single turbo GTO thumbs its nose at the neighborhood rules.- GM High-Tech Performance Magazine

This car is a shining example of American, Australian, European and Asian ingenuity. Don't sound so surprised as you read on. - GM High-Tech Performance Magazine

Check out this 2006 Pontiac GTO that has a that has a LPE 112H supercharger. Read more only at www.gmhightechperformance.com, the official website for GM High-Tech Performance Magazine!

Read more about this 2006 Pontiac GTO submitted by one of our readers here at www.gmhightechperformance.com the official website of GM High-Tech Performance Magazine

Check out this one of a kind 2006 Pontiac GTO which makes 745-rwhp and is a daily driver. Only at www.gmhightechperformance.com, the official website for GM High-Tech Performance Magazine.

Check out a pair of 9-second dragsters that just tear up the strip. The first vehicle is 2006 Pontiac GTO and the second one is a 1998 Chevy Camaro SS. Check both these cars at www.gmhightechperformance.com, the official site for GM High-Tech Performance Magazine.

Check out these GM Cars from the 2007 January Street Heat, Featuring a 2002 Chevy Camaro, a 2006 Pontiac GTO, a 2000 Pontiac Trans Am and a 1987 Buick Grand National, Featured at GM High Tech Performance Magazine.