Camren Massengale's '03 Z06 just may be the ultimate "first car" 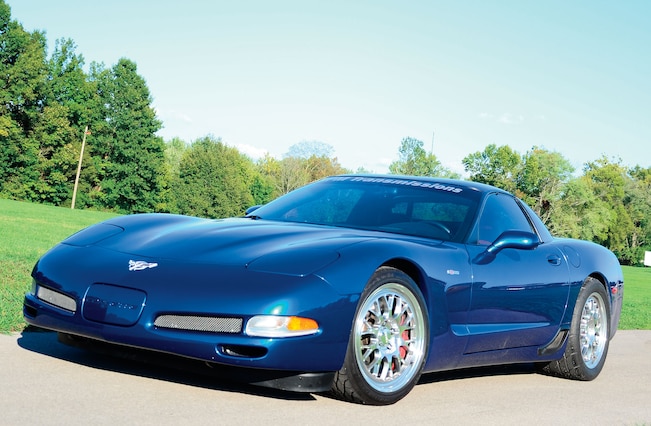 There's something to be said about a guy's first car, especially when it reveals an early interest in the go-fast lifestyle. In the case of teenager Camren Massengale, he grew up in a Corvette household, thanks to his dad Rodney, who owns and operates RPM Transmissions in Anderson, Indiana. Incredibly, Camren was a mere 15 years old at the time of our photo shoot, but he had managed to slip under the radar at many dragstrips across the country in the preceding months. How cool would it be to run 10s in a killer Corvette at the age of 15? Let's find out.

When Rodney found the '03 Z06 on a Corvette online forum, it had been abused to such an extent that the powertrain was no longer usable. This proved to be a perfect situation, as Rodney had a fresh LS3 sitting at the shop, and, thanks to his performance-driveline expertise, he could whip up a stout transmission and rearend setup in no time. The car proved to be a great father-and-son project, and it put Camren in the driver's seat at a very early age.

Although it looks stock on the outside, the car has a number of modifications that help it survive the abuse of drag racing. And though it was intended to be an entry-level performer, it goes 10.80s on pump gas with no power adders. The rear suspension is essentially untouched, aside from the original shocks having been swapped out for C6 Z06 units. The rearend, however, is an RPM Stage 3 piece, fitted with Driveshaft Shop axles and a 3.42 micropolished gearset. In addition to the differential upgrades, the undercarriage of Camren's Corvette now features C6 Z06 brakes on all four corners, as well as a C6 Z06 rear sway bar. The front bar was removed to reduce weight and allow for better weight transfer.

The Corvette rolls on a set of Fikse FM10 wheels, which measure 18x9.5 inches up front and 18x12 inches out back. Mickey Thompson 345/35R18 drag radials fit the car nicely, thanks to a Lingenfelter mini-tub kit that was installed at RPM. Rodney's shop also handled the installation of the Race Specialty Designs five-point rollbar.

Camren's right foot controls the healthy LS3, which is slightly larger in displacement than the Corvette's original LS6. The 6.2-liter engine makes great power in stock form, but this one features a few precise modifications that dramatically increased output without the need for racing fuel or any type of power adder. Starting with a stock short-block, the guys at RPM slipped in a Lingenfelter Performance Engineering GT11 camshaft and topped the package with a set of LPE-ported LS3 heads. The latter feature CNC work and all sorts of valvetrain goodies, including stainless-steel valves, Patriot valvesprings, Comp Cams pushrods, and stock rocker arms that were upgraded with a Comp Retro-Fit Trunnion kit.

RPM Transmissions built the LS3 engine, which is loaded with Lingenfelter parts and makes around 500 hp.

Although Camren didn't give us any horsepower numbers, his dragstrip times put the mildly tweaked LS3 solidly in the 500-horsepower range. Backing all that power is an RPM Level 7 4L60E automatic transmission that's packed with heavy-duty parts designed to withstand more than 800 hp at the wheels. The indestructible trans also features a Precision torque converter that allows the car to leave the line at around 2,800 rpm.

Even though the car led a rough life until Rodney and Camren "rescued" up, the body and paint escaped without serious injury. The original Electron Blue finish has survived more than a decade and still looks great, especially when combined with the added shine of the polished-aluminum wheels.

Aside from a Race Specialty Designs chromemoly rollbar, the

One major advantage of the Z06's fixed-roof body style is the weight savings it provides compared with its targa-top brethren. Camren's Z06 tips the scales at just 3,150 pounds, around 100 pounds lighter than a typical '03 hatchback. Factor in the comfy, fully optioned interior, and you have a car that acquits itself as well as on the street as it does on the track. For proof, consider that Camren put 1,200 miles on the car in its first season, only some of which were accrued in quarter-mile increments.

At the time of our shoot, Camren was already working on making the car faster, even hinting at the idea of nitrous. Since then he's tested out some other RPM-built cars as well, so to say this teenager is fully involved in drag racing would be a major understatement. Yes, this father-and-son project turned a slightly underage driver into an all-out car guy…and it only took 10.84 seconds.

David Moster’s 2003 Chevrolet Corvette Z06 is black and white and fast all over! Moster is the proverbial "gearhead" and has always had a passion for cars.