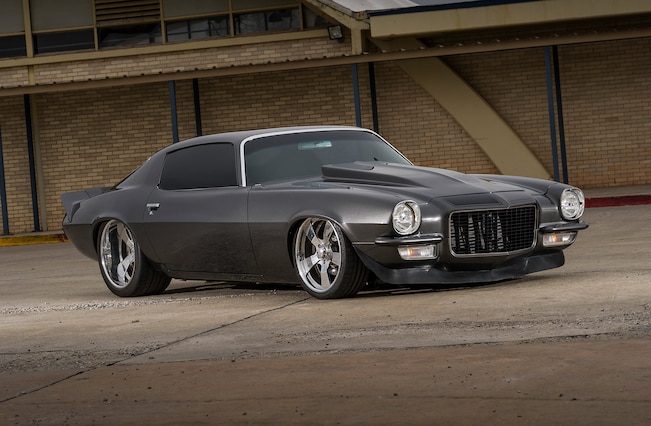 Mr. Leclerc—Edmond, Oklahoma’s Javier Leclerc to be precise—is, without question, a car guy. More specifically, he’s a Camaro guy, through and through. Furthermore, unlike many of his Bow Tie brethren, he also has the great fortune of having a “car girl” as his significant other. That would be Mrs. Leclerc, aka Gwen.

It was a few years ago, as Javier was finishing up a numbers-matching ’69 Camaro that Gwen laid her eyes on a ’73 Camaro, which also happened to share a numbers-matching quality. A friend of the family owned the second-gen, so being the generous, loving husband he is, Javier bought it as a Christmas gift for his wife.

Not long after the acquisition of the ’69, Javier noticed it was a little lacking in underhood machismo, so to speak—“the D2 302 engine was not enough for me,” he recalled. “So, I decided to buy another ’69 to build a full-blown Pro Touring machine—with 700-plus horsepower—instead of butchering up the all-original Z/28.” So, what exactly does this have to do with the missus’ Camaro?

“After a couple of years of driving my monster ’69 Camaro, I noticed that Gwen’s Z28 barely moved from the garage. She told me she still loved the car, but didn’t have time to drive it. After digging deeper into the matter, I discovered that while having a big garage full of cars—some Detroit muscle and some exotics mixed in—she didn’t feel that her Camaro was ‘exciting’ enough to drive,” Javier admitted.

Springboarding off his own decision to double his pleasure by building a second ’69, that’s exactly what he did for Gwen in order to re-inspire her driving pleasure. “I started looking for another Gen II to build for her … so she would get all the attention in the world when she drove it.

“A couple months into the hunt, I saw an incredible ’73 on an open trailer heading south on the opposite side of the highway. I rushed to find an exit to turn around, but it took me 10 minutes to finally get on the southbound lanes. Took another 17 miles to catch up and persuade the driver to pull over.” Come to find out, the car wasn’t for sale, but Javier convinced the driver/owner, who at the time was relocating to Texas, to call if he ever decided to sell.

Javier’s quest continued: “After eight months of looking for a decent deal on a car, the guy from Texas called. Once we came to an agreement, he informed me that the only way he’d sell me the car was if I returned the trailer he used to haul it down there to his dad. Done deal.”

With Gwen’s second second-gen in their possession, the first order of business was to liven up the Z28’s giddy-up, just as Javier had set out to do with his number two. That translated into a 600hp 502 replacing the factory big-block, which coincidentally began smoking and running poorly upon the Leclerc’s first drive of the ’73. After the heartbeat transplant “…Gwen took it for a spin, and when she returned, had a smile from ear to ear.” While Javier may have succeeded in giving his wife some new driving inspiration, the saga of her latest Gen II is far from over.

“We are still planning to install Vintage Air and redo the full interior as well as install a 3-inch exhaust system to make it breathe better. But for now, we have the best of both worlds when it comes to Camaros. I can’t take credit for building this amazing car, but I now have a great platform to work from,” Javier surmised.

As for that aforementioned “credit,” the short list goes a little like this: Absolute Motorsports handled the Edelbrock-equipped 502 (which features a Demon 850, MSD ignition, and Hedman/Spintech exhaust) as well as the Moser 12-bolt Posi; DC Transmissions took care of the 700-R4 overdrive; Ray Zaracki, Jr. is responsible for spraying the PPG Slate Gray Metallic (over his own bodywork); and Distinct Customs gets the nod for adding the current interior modifications. Behind the Z28’s polished, Michelin-wrapped 19- and 20-inch Huntingtons are 11-inch Wilwood discs, the front hung off Heidts 2-inch dropped spindles and tubular control arms (mounted via Heidts subframe connector). Additionally, the ’73 has been outfitted with a complete RideTech airbag system.