The “Ultimate Camaro” was influenced by Donohue, Built by Penske, and found in north Jersey 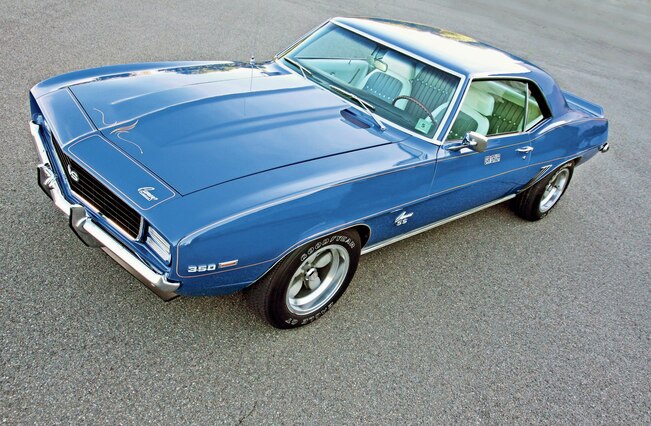 What would you call the ultimate first-generation Camaro? Would it be the factory-drag-racer COPO 9560s of 1969, the Yenko Super Cars, or the ’67 Z/28 prototype that—per Chevy legend—Vince Piggins gave Ed Cole to drive home one day?

Or would it be one that a collection of ink-stained wretches from Car and Driver magazine conspired to produce with the race shop that built the Sunoco-sponsored Camaros that Mark Donohue raced—and won with—in the SCCA’s Trans-Am series?

That ’69 Camaro SS/RS Sport Coupe became known as the “Blue Maxi”—and it survives to this day, wearing its Penske-applied Sunoco Blue paint over its original LT-1 engine, Muncie M-21 four-speed, and Donohue-influenced chassis.

Jerry Schmidt is Blue Maxi’s second owner. He not only read about it when it was a magazine project car, but he also heard about it coming into the Chevy dealer he worked at in 1970, Fahrenkopf Chevrolet in Garfield, New Jersey. Jerry was having lunch at a nearby hot dog stand when the Blue Maxi’s first owner—who’d won it in a prize drawing by the magazine—came in.

Blue Maxi had about 19,000 miles on it then and a history that your typical “OK Used Car” didn’t have—one its winner and first owner was suspicious of. “He only had it about three or four months,” Jerry said. “His quote to me one time was, ‘I don’t trust it because it had been raced and rallied.’ He wanted a ’70 Z28, so after he won the car, he used it as a down payment to get a new ’70.”

But instead of a barely driveable project, Jerry had a ’69 SS/RS that was in great condition, with equipment not found on any other ’69 Camaro. First was the engine—the first LT-1, assembled from the best small-block goodies on Chevy’s parts shelf at the time, like a four-bolt main block, “double hump” heads with 2.02-inch intake valves, a steel crank, solid-lifter camshaft, 11.0:1-compression pistons, and a Frigidaire A/C compressor. A set of Stahl headers went on, as did a factory aluminum intake and an 800-cfm Holley four-barrel.

Assembled in the Penske Racing shop in Newtown Square, Pennsylvania, back then it replaced the standard L48 300hp 350 the car was built with, and was the predecessor to the RPO LT-1 engine that joined the Corvette option list—and was standard in the Z28—in 1970.

Then there were the brakes, and not just a set of the ultra-rare RPO JL8 four-wheel discs, either. “It’s got race brakes on it, which were a big problem,” said Jerry, who added that finding replacement parts for them was difficult, at best. “The package is supposed to be four-wheel discs. It was from the factory, but then what happened—when it went to Penske and they built it, they put rally-car brakes on the front so they could use it as a pace car for rallying and stuff. So when I went to get them, they wanted a thousand dollars for just front pads. The whole setup in the front, the two calipers in the front, are actually different than the package the car came with because they used the ones that they made the racecar out of. So that gave me a problem, getting that, because I had to rebuild the cylinders on the whole thing.”

That brake rebuild also necessitated another repair when those original brakes failed. As Jerry recalled, “I actually nicked the bumper in front when I was taking it down to do the brakes. By the time I went around the block, I didn’t have any.” The resulting minor collision damaged the original front bumper and grille, which Jerry replaced with original ’69 Camaro items.

Other than those repairs and routine maintenance—plus replacing a left-front spindle and left-rear axle shaft, likely bent during “spirited” driving by the magazine’s staffers—all Jerry’s done with Blue Maxi is enjoy it, driving it enthusiastically and showing it from time to time. “There’s no rot on it—nothing,” Jerry said. “That’s because it’s been kept in a garage.”

When he’s shown it, it’s drawn plenty of attention. “When I go to shows, everybody says, ‘Where’s this been?’ Then I get arguments that there are two of them—one’s from the East Coast and one’s from the West Coast. But I’ve got the Protect-O-Plate, and there’s only one.” He added, “I get all these people who’ve read stories about it, and a lot of people who read about it back in the day are now seeing it. I had it at a Corvette show in Paramus, New Jersey—I got a Third Place there this year—and a lot of those guys knew it. So it’s pretty much known.”

Known, but not for sale. Jerry said he’s had more than a few offers to buy it, which he’s turned down. “One guy who built the number 6 that Penske drove wanted to buy my car like crazy, and I said it was not for sale,” he said.

Jerry added, “Chevrolet should have built Camaros to this specification in 1969, like they did with the COPOs,” noting the Camaro’s extended ’69 model run. “It’s sure great to own and drive a piece of American-built automotive history…a one-of-a-kind, super-great Camaro.”