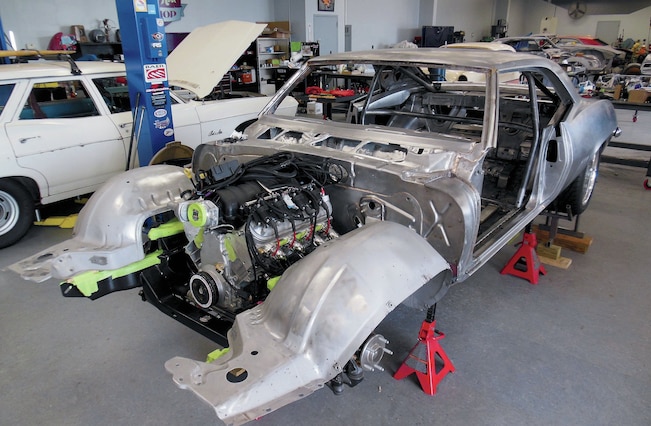 It’s a cold hard fact that projects involving classic Camaros commonly carry hidden secrets that lay quietly beneath that thick layer paint and clearcoat. And once you start digging in to add a little personal flavor here and there, the car has a tendency to take on a life of its own. Such was the case with this ’69 being built at Holohan’s Hot Rod Shop in Mooresville, North Carolina.

Dan Holohan gives us the lowdown. “The car started out as a project in which I’d help my good friend Jon White install a DSE suspension system and a set of mini-tubs in his garage a couple nights a week after work hours. We even joked and called it ‘date night’ when we would get together to work on the car. Now, it’s not uncommon for cars like this to need all new sheetmetal, and this Camaro was no exception, but I noticed that the entire roof panel had been cut off and replaced with a donor roof. And not just the skin; it had been cut right through the A-pillar—inner structure and all.”

With the extra sheetmetal work required, the car moved over to Dan’s shop, with the agreement that Jon still help out a couple nights a week and keep “date night” intact. Done deal.

Motivation will come by way of a 655hp Mast Motorsports 427 LS7, which will exhale through a set of Ultimate Headers and custom HHRS 3-inch exhaust and Flowmaster mufflers. A Tremec T-56 will handle shifting duties, while a Detroit Speed Inc. subframe and QUADRALink suspension system will take aim at conquering all corners and apexes. Billet Specialties Boost wheels and BFG KDW rubber will reside on all four corners.

Dakota Digital VHX gauges will keep Jon informed on engine vitals, and a Vintage Air SureFit A/C system will keep the occupants cool while secured in a pair of comfy Corbeau Sport Seats.

Semi-tucked bumpers, rocker lip extensions, recessed emblems, and new HHRS chin spoiler are on tap for the exterior modifications, while the new sheetmetal will be doused in Porsche Liquid Silver with charcoal “massaged” DX1 stripes.

Dan pointed out that throughout all the trials and tribulations of a long-term project like this, the car usually takes on a name. “Date night is a term we commonly used, so the name just stuck. In fact, Jon liked it so much that he got “DATENITE” personalized plates.

Dan joked that when people see the plates while Jon and his wife are cruising the ’69 they’ll think “awe, that’s so sweet.”