When the Dude Selling the Camaro of Paul Stegall’s Dreams Backed Out on the Deal, He Went on a Mission to Change His Mind Back 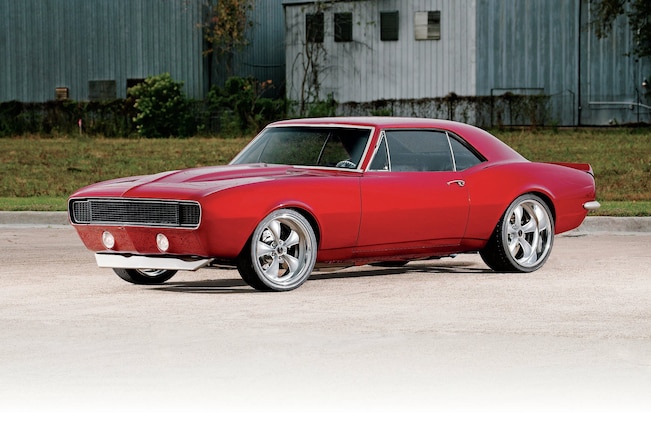 Hot rodding brings out the inner machismo in all of us, or does it? From afar, all the grunting, chest-pounding, one-upmanship, and general Neanderthal emulation seems to confirm this assessment. However, the hobby has a way of bringing out man’s inner femininity as well. Going back and forth on whether to go turbo or blower, vacillating between a five- or a six-speed manual, and hanging on to stagnant project cars just because of emotional attachment very much resembles overgeneralized, stereotypical female behavior. Paul Stegall of Florence, Mississippi, channeled his inner female at an early age. As a 14-year-old kid in 1986, he found the ’67 Camaro of his dreams, took it on a testdrive with his dad, and was ready to fork over the money. That’s when the seller suddenly decided to get in touch with his feminine side by changing his mind and refusing to sell the car. Determined to buy the car, Paul worked the owner for months hoping to change his mind back. His efforts eventually paid off, and now he has an LS3-powered, T-56-shifted, four-linked car of his dreams and 28 years worth of memories to go along with it.

As the son of a responsible family man who drove sensible family cars, Paul didn’t grow up around project cars. Even so, his old man managed to pass the car bug down. So when Paul was almost old enough to drive, his dad was more than willing to tackle a father-and-son project car with his boy, and for Paul it had to be a first-gen Camaro. “The elementary school I went to in the early-’80s was right next to a high school, and a lot of the kids there drove first-gen Camaros. Ever since then, I always wanted a ’67 Camaro with hideaway headlights,” he explains. “My dad called me from work one day and said he found a Camaro for sale in the newspaper for $2,500. I hopped on my bike to check it out, and sitting in the driveway was a red ’67 RS with Cragar S/S wheels. It was love at first sight! My dad and I took it for a drive the next day, and I still remember the smell of the interior and the sound of the hopped-up 350 when the motor fired up. It was the best ride of my life.”

That excitement soon turned to disappointment, but Paul didn’t let that ruin his dreams. “When we came back from our testdrive, the car owner had a funny look on his face and said ‘I’m sorry, but I just don’t think I can sell it.’ I was devastated, and I must have ridden my bike by his house a thousand times over the next couple of months,” Paul recalls. “Whenever I saw the car owner outside, I asked if he had changed his mind. Finally, he called up my dad one day and said he needed some money. We hurried over there and bought the car before he had a chance to change his mind again. The car had a 350 small-block, a TH400 transmission, and a decent paintjob.”

Fast cars and teenage drivers often lead to crunched sheetmetal, and after a close encounter with a light pole, the Camaro needed a new front end. Relying on resourcefulness rather than a fat checkbook, the father-and-son duo decided to fix it themselves. “During my junior year of high school, my dad and I took a body repair class at night to get the car ready to paint. A fireman who worked with my dad sprayed it candy apple red,” says Paul. “We didn’t have a shop to work in, so we spent a lot of days at the fire station replacing the interior and trim. Those were some great times with my dad. I worked at a car wash all through high school, and every dollar I made went into the car. We swapped out the rearend, rebuilt the trans, installed a high-stall converter and a bigger cam, and it was ready to tear up the streets.”

After high school, Paul started bracket racing and promptly blew up the motor. A fresh 400 small-block replaced the old 350, and the Camaro evolved into a race car. Although it ran blistering 10.70-second e.t.’s at the track, Paul and his wife were starting to raise their kids so racing didn’t seem as important anymore. “My daughter loved sitting in the car and riding with me in the pits as I warmed the car up, but she always cried when she had to get out before I made a pass. She just didn’t understand, so in 2008 I decided to build the Camaro as a car we could enjoy together as a family,” Paul explains. “I ran into Jamie Bush, a cruising buddy from my high school days, at a local show. He just finished building a ’55 Chevy for an NBA player and the car blew me away. I told him I was getting ready to tear my car down to get it roadworthy again, and the rest is history.”

As the build progressed, Jamie played a pivotal role in the direction of the car. Paul’s original plans called for updating the suspension and restoring the stock interior, but what he ended up with is an LS3 crate engine, a T-56 Magnum trans, a Moser 9-inch rearend, a Heidts Pro G front clip, a Detroit Speed Inc. four-link, and Wilwood four-piston disc brakes. “I never intended to go this far with the build, but it just snowballed. The original front subframe had some damage, so it made sense to go aftermarket. Then, after hearing a friend’s LS3 with a cam, there was no going back. Then if you go with an LS engine, you have to get a manual trans. Jamie Bush is a true artist, and he talked me into doing it right the first time so I wouldn’t have any regrets once the build was finished. Every step of the build turned out so nice that it was hard to skip out on anything. A wise man once told me that price will soon be forgotten, but the quality will remain.”

While anyone can bolt on off-the-shelf parts, it’s often the custom fabrication of a project that separates the studs from the duds. Once again, Paul’s Camaro doesn’t disappoint. One of the most noticeable changes from stock is the custom front valance with integrated ’69 Camaro running lights. To clean up the windshield area, the wipers got deleted and the cowl has been smoothed flat. Under the hood, the inner fenders, firewall, and radiator cover are all smoothed as well. Adding just the right touch of bling are Marquez Design LED taillights and parking lights and Ringbrothers hood hinges and door handles. It’s all finished off in House of Kolor Candy Red paint, and MHT Foose Nitrous wheels—measuring 19x8 up front and 20x11 out back—complement the aggressive stance.

Not surprisingly, no expense was spared inside the cabin, either. Paul Atkins gets credit for the trick custom fiberglass dash, which houses retro Classic Instruments gauges. After Jamie Bush built the custom center console and door panels, he took it all to Little Joe’s Upholstery (Pearl, Mississippi) to have it covered in two-tone leather. As expected, the Camaro’s interior is packed with modern creature comforts such as power windows, Vintage Air A/C, and a Clarion stereo with GPS navigation.

Since completing the build in early 2013, Paul has taken the Camaro to a couple of shows, but what he enjoys most is going on long cruises with his family. In the near future, he plans on installing bigger brakes and taking a stab at autocrossing. Somewhat predictably, Paul has received many offers to buy the car in the 28 years that he’s owned it, but he’s never even considered parting ways with his Camaro. “The best part of owning a classic car is the time you get to spend with your friends and family. This car is a part of me, and selling it would be like selling a family member,” he quips. Unlike the guy who unsold it before he sold it, we don’t think Paul is going to change his mind once, let alone twice.