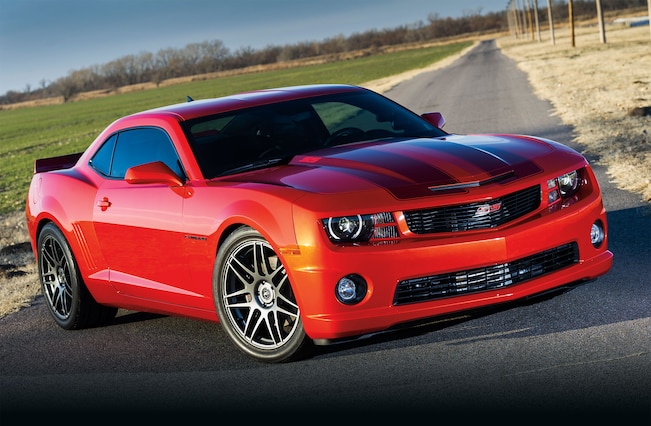 Brad Stewart's muscle car "sickness" (his words) started when he was just 14 years old. He and his father purchased a '73 Camaro LT with the Z28 package—a car that would later become his only means of transportation throughout high school. "My dad wasn't highly mechanically inclined, so by necessity I did most of the ‘wrenching' on the car and found that I had good mechanical abilities," remembers Brad. "It's something I must have inherited from my grandfather."

It's that mechanical gift that also makes Brad quite a bit more methodical than a lot of muscle car guys when it came to upgrading his '11 Camaro SS/RS by strengthening the driveline parts before dramatically increasing the horsepower. Most of us car guys go about building a hot rod in the opposite direction. We start off by throwing more horsepower at the thing with total disregard for the complementary factory components—parts not designed to participate in such reckless behavior. We bolt on a supercharger yet fail to address the needs of the clutch, driveshaft, or rearend. Before you know it, the clutch smokes in anger, the driveshaft bends like a mini-mart pretzel, and the rearend loses teeth quicker than a rookie ice hockey goalie without a facemask. It's blatant parts abuse!

"I actually fried the factory clutch with the stock engine at the dragstrip, so that incident enlightened me on how this build was going to go," said Brad. "To this day I take a lot of heat from my friends for building up an overly stout driveline while running the times I do at the track. To me it makes more sense to go overboard on the driveline and fuel system now so I can throw more power at it later on."

With that said, Brad bolted up a set of ARH (American Racing Headers) 1 7⁄8-inch long-tube headers and a Borla exhaust system just a few days after he took delivery of the car. A Cold Air Inductions element went in at about the same time. That maneuver may have gone against Brad's thinking process, but c'mon, the dude's a hot rodder at heart and a muscle car has to sound like, well … a muscle car. Besides, what's the harm in freeing up 40 or so horsepower?

Brad admits it takes incredible restraint to hold back on just slapping big horsepower on the car, but as he says, "I'm not one of those ‘make it fast, break it, then fix it' kind of guys. What good is all that power if you can't use it efficiently and safely?"

We get what you're saying, Brad. We just wish we had the ability to restrain ourselves.

For now, the factory LS3 block remains stock, but Brad did bolt on an ECS (East Coast Supercharging) SC 1500 supercharger set at 9 psi of boost and stuffed in a custom COMP grind spec'd by Texas Speed and Performance to bring the party up a few notches. A 90mm VMAX ported throttle body introduces additional atmosphere, while Squash Performance 5th-gen Camaro twin E85 pumps provide ample swill. The system is armed with a boost-detection switch to fire up the second pump when Brad hammers the loud pedal. There's no chance this thing will go lean.

With the tuning expertise of Justin "Justune" Kalwei, Brad's efforts net the Camaro 636 hp and 581 lb-ft of torque to the tires. Although he's yet to make a full pass with this combination, it did run 12.03 at 115 when the first aftermarket clutch let go just after Second gear.

The suspension got a once-over with the addition of Hotchkis 1-inch lowering springs all around; Phadt solid aluminum subframe bushings; BMR Xtreme antiroll drag bar, adjustable lower control arms, toe rods, and trailing arms. The stock Brembo stoppers were upgraded with Hawk HPS pads. Brad added a line-lock for assistance in burning the hides and to get more consistent launches off the tree.

Like a lot of today's muscle car projects, many owners have adopted the idea of building multi-functional hot rods that perform well on the street, strip, and autocross or road course. Brad subscribes wholeheartedly and went so far as to employ two sets of wheels and tires for his ride, one for the drags and one for street duty. The drag wheels consist of Weld RT-S's (17x5) wrapped in M&H Racemaster skinnies up front while Weld RT-S's (17x10) carry M&H Racemaster drag radials (325/45-17) out back. For street use, 20-inch Forgestar F14 rollers can be found on all four corners (9 inches wide up front, 11 inches out back). The Nitto Invo 275/40-20 rubber up front and 315/35-20 out back provide a solid street combination for everyday driving yet offer excellent grip on track days. With two different wheel and tire combinations in place, both styles give this fifth-gen an aggressive demeanor regardless what "shoes" it's wearing.

Beyond the two-pod A-pillar gauge featuring an Auto Meter AFR gauge and Raptor shift light, the interior retains its factory trim. The line-lock controls are stealthily hidden under the dash—and the hold button? Good luck finding that one.

Like many other upgrades to come, a rollbar or 'cage is in the works.

Following suit with the interior, Brad continued to go light on exterior gadgets as well. Keith Scott at Premium Auto Restorations in Derby, Kansas, laid down the custom Orange Sunburst stripes over the factory GM Inferno Orange Metallic paint. He also fitted, prepped, and sprayed the Unrestricted Motorsports Gen 1 rear spoiler to match the race-inspired theme. The custom 'striped "SS" on the hood is the handiwork of Chad Ward. The GM Heritage grille and Spark Restorations billet SS grille badge and SS trunk emblem offer the proverbial "icing on the cake."

Brad claims his most memorable experience so far was taking a road trip with his wife, Georgann. "Having no particular destination in mind, we just pointed the car towards Texas and New Mexico until we found something interesting," said Brad. "We traveled a lot on the old Route 66 then shot south to New Mexico and ended up checking out Billy the Kid's grave, Roswell, and Carlsbad Caverns. The car did great and was getting up to 24 mpg."

Unfortunately, Brad's dad passed on in early 2010, so he didn't have a chance to see the car, but there's no doubt his dad's passion for hot rodding was handed down to Brad, as he's fully accepted the fact that this '11 SS/RS will never be completely finished. It will always be a work in progress. And if Brad were to run out of ideas on upgrading the car, we have a feeling he'd just go out and buy another one and do it all again.