Plucked From the Dry Climate of California, this Pristine ’91 Z28 Now Turns Heads in Indiana 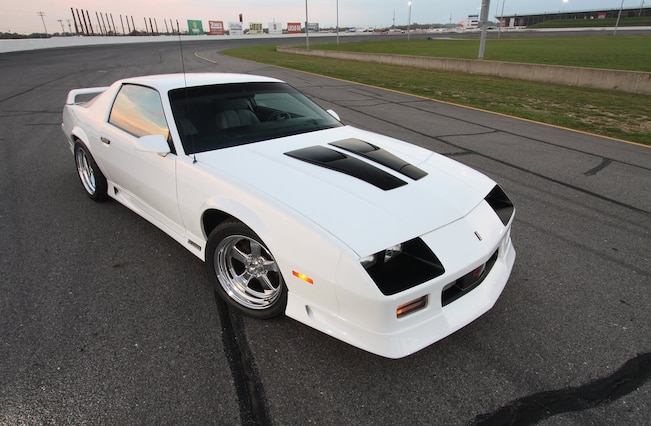 In the May 2014 issue of Camaro Performers magazine, we featured Mike Benge's nicely done, black '92 Z28. In this issue, we're featuring Mike's son James' white third-gen. You might come to the conclusion that James' '91 is the Yin to his dad's '92's Yang. Well, that could certainly be one way to look at it, but as James told us, the contrast between the two cars wasn't a conscious part of the plan. "My dad drove my car to a show for me, and soon after decided to get one for himself. It just so happened that the Z28 he found was black. It's really cool that we can work on our cars and hit shows together. And being they are both very nice third-gens, these cars get a lot of attention, and that just adds to the fun."

"I already have a street/strip '84 Camaro that runs 10s, but with no A/C, heater, or power steering it's only fun to drive for relatively short periods of time," said James. "Add in the spool, 4.30 gears, and 5-7 mpg, and the fun factor goes away real quick."

With his race car fix handled, he wanted a more sedate, street-friendly third-gen he could cruise around town in. "I looked for over a year before finding this car," tells James. "Through the classifieds on thirdgen.org, this low-mileage (66k) Z28 came up. It was in Lafayette, Indiana, and the Carfax report revealed it had spent most of its life in California. The underbody was as clean as the top side, and the interior was near perfect. The price was right, so buying it was an easy decision."

Although the car had a few mechanical issues, James had it running like a top in a matter of a few months. "Once I got the car more reliable, I drove it to cruise-ins, and to work on a daily basis. I even took it out to the dragstrip just to see what a stock L98 would run," reports James. "It ran 14.20 at 97 mph. Not fast by today's standards, but pretty solid for a stock car."

Although there's an LS1 awaiting transplant in the wings, for now the stock 350 rests between the 'rails with the only aftermarket engine mod being a K&N air filter. James got a custom chip burned to turn on the fans sooner, deleted VATS, but kept the stock tune. The estimated horsepower is 245 at 4,400 rpm and the torque is rated at 345 lb-ft at 3,200 rpm. Now, this car won't wake up the neighbors or even a sleeping baby for that matter, but that's not what this ride is about. With that said, the stock 700-R4 and 10-bolt rearend are all intact. And the tall 3.23 gears? Yep, still in the mix.

For increased attitude and improved handling, James cut 1.5 inches from the springs then bolted on a set of Koni adjustable shocks on all four corners. With the help of Shawn Lair's welding skills, UMI subframe connectors went in next, followed up by tubular lower control arms and a tubular Panhard rod. Not a fan of the stock wheels, James styled up the ride with a set of polished Billet Specialties rollers (17x8 front, 17x9.5 rear) and wrapped them up in Firestone Wide Oval Indy 500 rubber (245/45-17 front, 275/40-17 rear).

Although the paint was relatively solid, being over 20 years old meant it was probably time to take it to the next level. With the body already in great shape, Dan Moran at Carss Collison Auto Repair in Thornton, Indiana, gave the exterior a good scuff then laid down a fresh coat of PPG Arctic White pigment.

The interior retains all of the original bits, including the medium gray cloth covering. Even the factory CD player still rests in the dash. How's that for keeping that '90's flair intact?

James was surprised and honored to receive a Moderator's Choice award at the Camaro5fest in Indy last year, especially being at an event centered around the fifth-gen Camaro. Hitting local shows and cruise-ins with his dad and his '92 "Z" is what he enjoys most about having the car.

With an LS1 soon to take up residence under the hood, no doubt this stellar third-gen will take on a whole new personality in the power and driveability department. He might even be able to keep up with that black Camaro cruising right next to him.