A Winter Makeover Gave This 1957 Chevy 150 A New Attitude 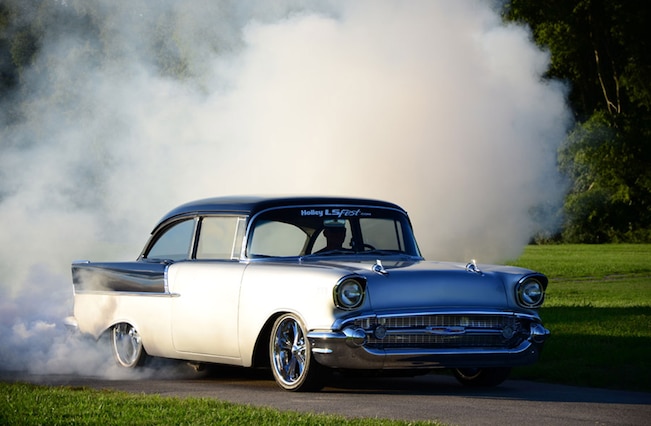 If you've been watching the old car market, especially in the modified segment, you know it's generally cheaper to buy a finished car than to start from scratch. Obviously, there's no dollar amount that can be tied to the pride of a self-built Chevy, but there's also no doubt that it's easier to modify a finished car to suit your tastes. Jason Chinn's approach is a great example of an entry-level build with professional results.

Jason bought this '57 150 at a Mecum auction in Florida, and brought it back to his home in Kentucky. The car was finished, and he got a great deal on it, but he set out to make a few changes to make it his own. His goal throughout the entire process was to have a machine that looked good enough to show, and had the always-important dependability factor, so he could drive it whenever he wanted. Upon bringing the shoebox Chevy home, he called on Heath Hoover of Ohio County Collision Repair for assistance. Jason and Heath handled a great deal of the work to transform the car into an impressive Tri-Five, with lots of power to back up the good looks.

Although the car still has some of the same equipment from the previous owner's build, Jason made lots of changes. The suspension got a complete revamp, with tubular control arms from Classic Performance Products (CPP), RideTech Shockwaves, and a Flaming River rack-and-pinion. Also on the list of upgrades is a CPP big brake kit, which features 13-inch slotted and drilled rotors and massive twin-piston calipers. Big disc brakes also roll out back on either side of the '69 Camaro 12-bolt rear. A custom four-link rear suspension uses RideTech airbags to offer an adjustable ride height. Though Jason could modify the chassis to make the car sit even lower, he likes the fact that he can use the car, even when it has very little air in the bags.

Old-school Chevy guys might cringe when we tell you Jason's car had a 454ci big-block in it when he brought it home from Florida. It ran fine, but the Rat, TH350 transmission and 4.11 gears didn't really offer the best combination for long-distance driving. So the 454 came out and an LS3, yanked out of a '10 Camaro, found itself a new home. Heath handled all of the fabrication work necessary to complete the swap, including a hand-fabricated, recessed firewall to replace the original unit, which was hammered in to clear the big-block. The LS3 is a great fit in the car's spacious engine bay, and Heath used a Holley oil pan and stock Camaro exhaust manifolds to clear all of the normal obstacles such as the crossmember and steering shaft.

The LS3 has all-stock internals but features a Walbro 255-lph in-tank fuel pump, which pulls 93-octane gas from the Tanks Inc. 16-gallon tank. Exterior engine modifications consist of Clayton Machine Works coil covers and a Spectre cold-air intake. A great exhaust note comes from the 2.5-inch exhaust, thanks to Magnaflow mufflers, and the LS3 stays cool with a Griffin aluminum radiator. Howell Engine Development tuned the engine and transmission, so Jason could enjoy more than 425 hp with the luxury of great fuel mileage. Behind the 6.2L engine is a 4L70E automatic overdrive transmission, which is all stock, including the torque converter.

Aesthetically, Jason's '57 is a clean and simple example of a mostly stock 150 two-door post body. The only alterations are the shaved door handles and smoothed trunk, and these modifications were already performed when Jason bought the car. The silver paint was already there, but Jason commissioned Ohio County Collision Repair to give the car a bit more personality with a two-tone paintjob. The black is Spies-Hecker basecoat/clearcoat, and the entire body underwent color sanding, buffing, and polishing. The result is a super-slick job that is nicely complemented by the unique trim of the 150 body style.

One of the most elaborate aspects of Jason's '57 is the full custom interior. Detroit Customs in Tampa, Florida, handled the work, giving the interior a modern look with two-tone leather upholstery, and a custom console that runs from the dash to the package tray. The front seats are custom buckets, while the rear seat was split to allow the waterfall console to flow through the middle. It's hard to improve on the stock '57 Chevy dash, so it's mostly stock, aside from the Dakota Digital VHX gauges. The car also has a killer audio system, complete with a Pioneer CD player, two amplifiers, two 12-inch subwoofers, two 6x9s, and two 5-inch speakers mounted in custom kick panels. Full coverage with Dynamat offers great sound deadening and insulation for the interior. Jason stays cool with a Vintage Air Gen II A/C system and grips a Billet Specialties steering wheel, which is mounted to a CPP tilt steering column.

Overall, Jason's build plan worked out well, and the finished product is exactly what he wanted from day one. This build approach is a great way to enter the hobby without being completely overwhelmed with a ground-up build (or cost). It made for a great car in this case, and Jason is truly enjoying the dependability and power from the LS3 swap. It not only drives great down the highway, but Jason also puts the Positraction to use on a regular basis, which is always a great way to enjoy your classic Chevy.

Check out Ronnie Staples 1957 Chevy Bel Air 150 which was transformed to a Businessman's Special. Under the hood is a LS2 from a GTO with a T56 six-speed transmission. Only at www.superchevy.com, the official website for Super Chevy Magazine.

This 1957 Chevy 150 Handyman sedan is a pristine example of a restored Tri-Five, and this Classic Chevy gets its power from a dual quad 283 engine - Super Chevy Magazine

Read about Josh Baileys 1957 Tennessee Shaker looks like a 1960s drag car survivor. But looks can be deceiving.