A 700-plus horsepower C6 Z06 with serious attitude 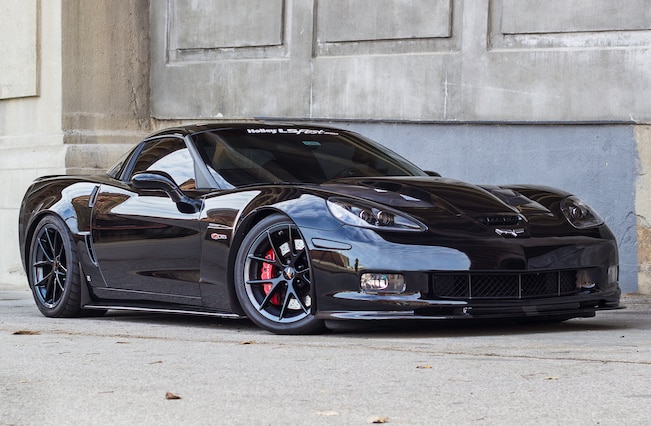 Attitude is everything. Situations can be drastically effected with the proper outlook, determination, and a little bit of good luck. The competitive situations in professional road racing are no different. Sure, the car, crew, and drivers ultimately have to perform like a well-oiled machine, but individual attitudes can wreck potential, or foster greatness. Just ask the champs from Corvette Racing.

The team’s attitude can be summed up into three words making one phrase, “Take No Prisoners.” The slogan means to be ruthlessly aggressive or uncompromising in the pursuit of one’s objectives. That fierce assertiveness has guided Corvette Racing to multiple championships, with drivers piloting the Corvette C5.R, C6.R, and now C7.R racecars. Flying amongst all of the carbon fiber and bright yellow paint scheme is a highly recognizable skull, with crossed Corvette logo flags for eyes, named Jake.

Originally drawn up tableside on a napkin, Jake started ridding Corvette B-pillars during the 2005 24-hours of Le Mans, the historic endurance race in France. It was during that time when the team adopted the “Take No Prisoners” attitude, since that very moment, Jake has been a resilient part of the team’s culture ever since. Not to be mistaken with a similarly marveled skull, the name is said to have come from a former Corvette Marketing Manager, who thought the skull looked like a kid he went to school with named Jake. From there, Jake has apparently taken on another birth story, sharing the name with a character from The Blues Brothers film, also named Jake. In fact, ZR1 Corvettes have adopted a blue Jake with devil horns, named Elwood. Names origins aside, the love for Jake has since spread like wild fire, thanks to both Corvette Racing, and BadBoyVettes.com. Crewmembers, driver’s suits, and anything and everything to do with Corvettes in between, can be seen sporting the Jake. A few different renditions and paint schemes have come and gone, but the edgy slogan Jake stands for is forever stuck with the Corvette Racing empire.

The love for Jake has trickled down to many performance enthusiasts, just like Mike Fisher. His 2008 C6 Z06 shares similar bloodlines with the C6.R racecar, and he proudly embraces the “Take No Prisoners” attitude. The Blue Springs resident proudly shares an active aftermarket performance mindset too, tearing up roads all over the state of Missouri. Just like the Corvette Racing clan, his attitude, and consequently the car’s attitude, rightfully sets his ‘Vette apart from the rest. Mike’s completive outlook can obviously be felt in and around his Z06 nicknamed “Fishers Punisher.” The black beauty got its name because Jake slightly resembles that similarly marveled skull, but more importantly because Mike’s ‘Vette looks like it will rip the competition’s face off.

The devil is in the details. Producing 594 rear-wheel horsepower off the bottle, and roughly 700 to the wheels on it, Fisher’s Punisher is not for the faint of heart. Before the hood is popped and the modifications are revealed, take a second to find the ghosted Jake skull on the Corvette’s carbon fiber bonnet. Underneath is Chevrolet’s potent 427 cubic-inch LS7, and it’s been improved upon a bit to our satisfaction. You see, like most bowtie brethren, stock components only satisfy performance aspirations until the next part or component arrives. In other words, stock is never enough. Since he was on the same page, Mike knew it was time to uncork the full potential of the LS7, and enlisted the help of MC Racing, out of Oakland Park. The crew got started with the Mast Black Label aluminum heads, Lingenfelter camshaft, and a Fast 102 mm intake. From then on, Fisher’s Punisher was starting to live up to Mike’s elevated performance expectations.

You see, “[Mike’s] long time dream was to own a newer ‘Vette, but with old-school sound, and lots of horsepower.” Speaking of old-school sound, surely his previously owned ‘66 Nova SS, ‘73 Corvette, and ‘84 Z28 screamed quite loudly too. Since this is his fourth Corvette (he also had an ‘01 and ‘04 C5) Mike says, “My lovely wife Robin did not mind the OEM Z06 purchase, before the upgrades. Every time she rides in it now, she reminds me of how loud it is, how the exhaust stinks, and how stiff the ride is.” Music to any car guy’s ears, the car surely sounds like it belongs in the race paddock, thanks to the Dynatech headers, off-road mid-pipes, MC Racing modified OEM muffler, and Robin’s description. Considering the car’s stiff ride quality stems from the Pfadt coilovers up front and out back, Fisher’s punisher can accurately destroy apexes around corners too.

Mike’s attitude is addicting, and his Z06 is ready to take on the competition. He says, “I may eventually trade in the Punisher, but never the wife!” Not to worry, Mike does not plan to trade the crazy Corvette in anytime soon. Since he first put the setup together, he’s decided to add a bit more punch, in the form of nitrous. From there, not only does the Nitrous Express kit offer up even more reliable, on-tap power, but Fisher’s Punisher can back up its sinister look. The Jake that has been ghosted onto the carbon fiber hood sets a bold tone, but Mike didn’t stop there. Every corner of the Corvette has been touched, and blacked out to perfection, to satisfy his sinister style. The painted spoiler, side skirts, and splitter all hint toward a not so stock C6, and the Weld Racing wheels wrapped in Mickey Thompson tires help to grab all of the available asphalt when Mike grabs more throttle.

Every aspect of Fisher’s Punisher works perfectly together, with a threatening look and great intentions. With that being said the Corvette Racing skull that is sitting on Mike’s hood, known as Jake, represents more than just an attitude. It represents a passion, the passion for professional motorsports, competition, and for every Corvette Racing driver, crewmember, team member, and fan. You see, without the help from all of those individuals, the Corvette C5, C6, and C7 would not be as successful as they are today. Most technology, performance, and aerodynamic advancements are all tested on the track before ever hitting the production version of any high-performance ride. It’s the passion for high-octane, menacing competition that drives every performance oriented street-going automobile.

Now that you know the story of Jake, and what Jake represents, perhaps, you can relate to Fisher’s Punisher. Mike’s Z06 proudly represents the fans of Corvette Racing, and his or her passion and attitude. Thanks to every Corvette that came before Fisher’s Punisher, Mike can apply any performance setup or aftermarket application with confidence, knowing that the base platform has seen multiple on track victories. He chose to start with an already capable car, and make it his own. With some help from MC Racing, Nitrous Express, LG Motorsports, TheTuningStation.com, and his wife Robin, Mike was able to reach his performance goals and aspirations with a great ‘Vette. Mike was sure to not let anything get in his way, with that uncompromising confidence.

The passion, however, doesn’t stop with Mike. Next time a Corvette screams passed on the open road or track, take a quick look for Jake. Chances are, you’ll see it. Jake is everywhere, hitching a ride all over the world on Corvettes, or just about anything for that matter. Next time one appears, think of attitude, passion, and history it represents. Just take Mike for example, and with one look or listen, and you’ll agree; Mike has definitely earned the right to put the Jake skull on his hood.