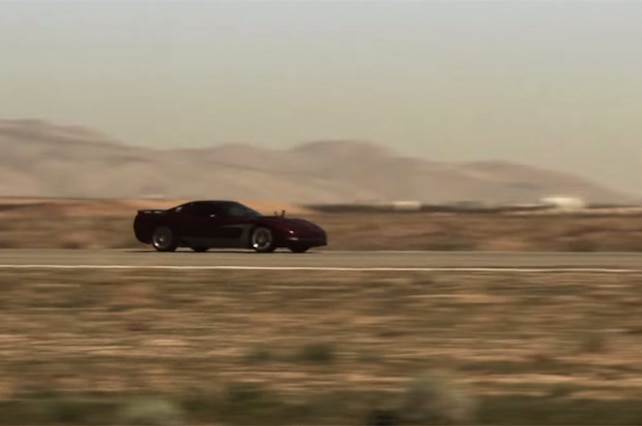 Like many Corvette owners, when Joel Feingold took delivery of his 1998 Corvette in January 1998, he wanted a more aggressive sound so he added a Borla exhaust. Next he installed a cold air intake, headers, and an engine tune for more power. Fast-forward to today, and Joel’s continued quest for power has transformed his 1998 Corvette into an 800 + HP asphalt monster! He uses this power to compete in standing start one-mile events. His favorite track is the Mojave Mile sponsored by MKM Racing at the Mojave airport's 2.2-mile, 200-foot-wide runway. This video shows Joel [at the Mojave Mile] making several standing start runs to over 200 mph! Here is the driving technique he uses: “I rev the engine to 2,500 rpm, let the clutch out and bring the Corvette to the point of losing traction. I short shift it at 5800 [rpm] into second and continue to fight for traction. Now I shift into third at 6300rpm where I can to go wide open throttle through the rest of the gears to sixth at 200+ mph.” Here is a rundown of Joel’s 1998 Corvette modifications.

He’s added a 418cid stroked LS3 engine with AFR 225 heads custom ported by Tony Mamo. Ryne Cunningham of Cunningham Motorsports specified the cam grind to produce a broad torque range, and an East Coast Supercharging C5 Corvette kit with a Paxton Novi 2000 supercharger was installed. It includes a 1,450 CFM intercooler. An Aviaid 12-quart 4-stage dry sump oil system is used, and QMP Racing in Los Angeles built the engine. It was tuned by Ryne Cunningham. The result? It produces 824-rwhp at 6,700rpm and 740 lb-ft of torque at 4,400rpm. A McLeod dual disc clutch transmits the power to a RPM-modified manual six-speed transmission. It uses G-Force low ratio 5th and 6th gears to maximize the C5 Corvette’s top speed. A UNITRAX differential with a 3:73 final drive is mounted in the back. Joel added Pfadt coil-overs with SCCA-approved Touring 1 (T-1) anti-roll bars connected with Heim joints. The car was corner weighted and custom aligned. Brembo GT brakes slow the 200mph beast. HRE 18x9.5 front and 18x10.5 rear wheels hold Toyo R888 tires approved for 200mph. Inside the 1998 Corvette's cabin he added a Doug Rippie Motorsports 4-point roll cage welded to the frame, and a racing seat with a five-point restraint holds him in place. Custom gauges keep him informed about his engine’s performance. Fuel is fed though a Holly Eliminator 1800 duel feed fuel pump and he boosts his fuel octane with Torco fuel additives (and he swears by this product). Joel is called a Speed Merchant for good reason!

To see more videos of his amazing C5 Corvette go to www.jbsblownc5.net.

How to Install Long-Tube Headers On a 1999 C5 Corvette

For more power, we installed a set of JBA long-tube headers on a 1999 C5 fixed-roof Corvette.

Part 1: We prepare to breathe new life into a 1999 Corvette hardtop, with a little help from L5 Motorsports, Forgeline, and Nitto. Click here for more details or check out the September 2012 issue of Vette Magazine.