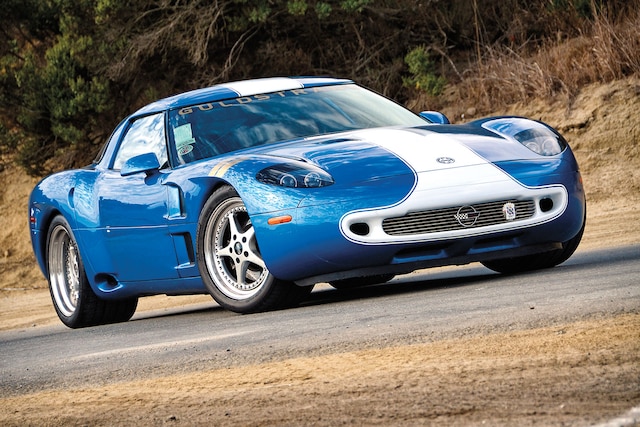 Nearly two decades ago, Dick Guldstrand set out to create the ultimate version of the ultimate Corvette, the "King of the Hill" C4 ZR-1. Drawing upon his extensive history with the marque, Guldstrand improved on what was, at the time, the fastest and best-handling Vette ever, incorporating influences from the Grand Sports of the early '60s inside a distinctively styled body. The result of his efforts? The spectacular '95 GS90.

The car starred at the L.A. Auto Show, then the motoring press got their chance to drive the first production version. In his review, Corvette Fever's Paul Zazarine noted, "Guldstrand has combined a design that harkens back to racing legends of the past, reflects contemporary design, and still cuts cleanly through the air. To this, he has added a proven, Rippie-built LT5 engine and precise tuning to the Corvette's competent suspension.

"The power comes on smooth, with no stumble or hesitation, right up to 7,000 rpm…On the road at speed, the initial impression is that you're not even going 100 mph—it's that stable. The ride is extremely smooth, and very stable at high speeds."

You're looking at GS90 number 2, the car that got all the ink way back when. Charlie Budenz, its owner, actually competed at Riverside International Raceway in the early days of Corvette racing. He's now part of a group called "The Fabulous Fifties," whose number includes those who raced at Riverside and other Southern California tracks such as Lions, Irwindale, and Santa Ana dragstips; ovals like Ascot; and road courses like Carlsbad and Torrey Pines.

"It was through these people that I found out this car was in Southern California, in an industrial park," he says. "I got to know the shop manager where it was, and I followed him, and the car, for a number of years. I was always interested in the car, and I wanted to have it. It was sitting there, unused."

Reunited: Dick Guldstrand (right) with Charlie Budenz and the GS90, at the 2013 Rolex Monterey Historic Reunion at Laguna Seca.

For power, this one had an LT5 that Doug Rippie Motorsports tweaked from the stock 405 hp to a screaming 475. However, it and other systems on the car needed attention when Budenz found it. "Because it had already been driven by God-knows-who, the clutch was fried when I bought it," he recalls. "They were doing donuts in the parking lot, or some dumb thing.

"I had to pull out the fuel system, from the injectors to the gas tank," Budenz continues. "Everything was cleaned up and put back in again. Same with the ABS brake system—we had to pull all the brakes, go through that, then reassemble everything and get it taken care of safely. The same with the air conditioning, and some of the wiring had to be redone."

If you're thinking the car is a non-streetable monster, think again. "It has not been modified in a way that prevents it from being certified by inspectors from California's DMV or the CHP," Budenz says of the blue-and-white coupe.

He adds that the work wasn't done just anywhere. "It's been back through Dick Guldstrand's shop," he says. "Dick still works there five days a week. I admire and respect him—he gives back so much to Chevrolet and Corvette. He's very generous with his time, his knowledge, and his experience."

And that experience produced a limited-edition tuner Corvette that's still capable of drawing raves from those who experience it. "The car is a hoot to drive," says Budenz enthusiastically.

He adds, "I can compare it with the '96 Grand Sport that I had previously. It rides and drives better than the Grand Sport, which itself is no slouch. It roars when I take it through the gears toward 6,000 rpm, and it sounds like a Ferrari."

Along the way, Budenz has also received plenty of support from the National Corvette Museum and the Riverside International Automotive Museum. "They've all been supportive, and they've all been helpful to me," he says.

Want to add a GS90 to your collection? If you're looking for one of the other five, be prepared to wait—and have a big bankroll ready if or when one becomes available. "As far as I know, the other five GS90s are all in museums," Budenz notes. "I believe there are two in Europe, one in Japan, one in Detroit, and one in L.A. Mine's the only one that's ‘loose.'"

Or, you could add one to your die-cast collection, thanks again to Dick Guldstrand. "There are a couple of other projects that I'm working on with him," says Budenz. "One is to make a 1⁄18-scale die-cast model of the GS90. I can get together with the manufacturer, to do whatever they want to do for dimensions, photography, or any of those things."

But if you still desire a fullsize Guldstrand supercar, Budenz says, "Pick 'em up now, because they're going to go up [in value], particularly since the value in it is that Dick is alive."

By the time this GS90 graced Corvette Fever's May '95 cover, the handwriting was already on the wall. Not only was GM tooling up the fifth-generation Corvette, the company was also readying a new series of pushrod V-8s—the LS engines—whose performance came at a lower cost than that of an overhead-cam engine like the Lotus-engineered and Mercury Marine–assembled LT5.

Still, this is one memorable specialty Corvette, made even more so by the legendary racer and tuner who devised it.