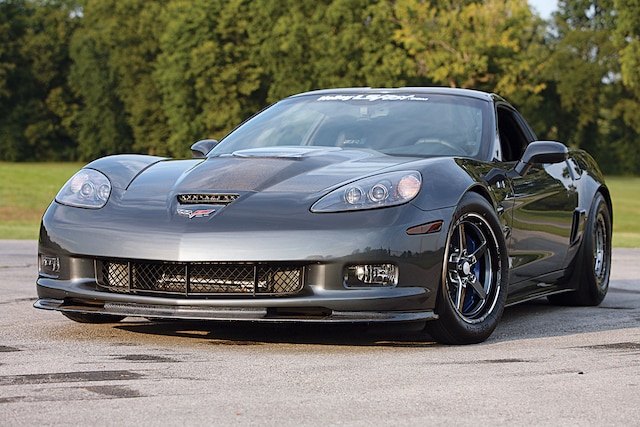 King of the Hill. it can mean many different things, but to Corvette owners and enthusiasts the world over, it only has one meaning - the ZR1. Chevrolet coined that phrase in 1989, for the yet to be released ’90 ZR-1 Corvette - a car that featured many innovative technologies never before found in the Chevrolet sports car; dual overhead camshafts, four valves per cylinder, an air management system (all co-developed by Lotus), and adjustable active ride control, among other technological advancements.

It was a car that many lusted after, but very few could own due to its high price tag and limited availability. As a result, only 6,939 Corvette ZR-1s were sold between model years 1990-1995, and it was one brand of Corvette that enthusiasts never thought they would see the likes of again. But little did we know that the King of the Hill would be back for 2009, some fourteen years after that last one rolled off of the Bowling Green, KY assembly line. This time around, it was an all-GM effort; overhead valves, a single camshaft, and a factory-supplied supercharger, that replaced the complicated intake runners from the ’90s LT5 version, by way of the exclusive LS9.

As a result, buyers with over $100,000 at their disposal (and more cash for mods) flocked to the C6 ZR1 like it was going out of style. With a factory-boosted mill sitting under the hood, it was a no-brainer for tuning shops and traditional gearheads alike to strap on all of the latest hardware they could, in an effort to lay claim to the fastest Corvette in town. Enter Eric Lancaster, and his dreams of laying claim to something much more substantial.

Not being satisfied with just impressing the locals, he set his goals higher than most. He wasn’t interested in the Nurburgring lap times, or winning a trophy from an A&W car show. He wanted something more, something truly note-worthy; he wanted to own the fastest quarter-mile C6 ZR1 known to man. Tall order. But after two long years and a ton of determination on his part, he finally pulled it off.

What you’re looking at, on these pages, is the fastest C6 ZR1 in the country, as of September 6th, 2013. We were on hand as it happened, during this year’s Holley LS Fest, and once back in the pits, Eric made sure to track us down to tell us all about it – while wearing the biggest smile we’ve ever seen on a man’s face. We couldn’t blame him. Hey, if you owned the fastest C6 ZR1 around, you would probably be pretty excited too. But what we really wanted to know was how Eric pulled it off.

After talking with Lancaster, we find out that this ZR1 is not his first “high-end” car that he’s ever purchased - far from it, in fact. It’s actually his 5th Corvette, having previously owned a ’95 ZR-1, a ’99 FRC, an ’05 coupe, and an ’07 Z06. He’s even had an ’06 Viper and Porsche 911 C4S along the way, plus a Mercedes-Benz S550 as a daily driver. Speaking with him some more reveals that despite his taste for exotic vehicles, the Corvette is his favorite car of all, and he felt honored that he could break that record in the Corvette’s hometown of Bowling Green, KY – which is also happens to be Eric’s home state.

For those of you who haven’t skipped over to the Data File column for the laundry list of modifications, by now, you’re probably pulling your hair out trying to figure out what all is done to Lancaster’s car. The results may surprise you. Thanks to GM’s incredible LS-series design in conjunction of a factory blower, it didn’t take too much work to push the Vette into the mid-9 second zone (9.43 at 149 mph to be exact).

The engine itself is relatively stock, particularly the bottom end. However, upon closer inspection, one would see a carbon fiber K&N cold-air induction kit that feeds into a TPIS 102mm throttle body and the stock 2.3L blower, while a set of ported BTR/TEA cylinder heads and a pair of American Racing long-tube headers with 2-inch primaries expel the spent gases. For decreased backpressure and an improved soundtrack, an Akrapovic X-pipe and 3-inch catback were called upon.

The finer details include Lingenfelter pulleys for increased boost, a Katech heat exchanger to help keep the temps in check, with Eric relying on an RPM-built TR-6060 gearbox and RPS clutch to change gears.

Surprisingly, the only chassis and suspension mods in the entire car are a set of RPM output shafts – that’s it. Even the stock 3.42 gearset resides out back. Eric has only upgraded the front brakes to Brembo carbon ceramic binders, to bring this beast to a halt, and dropped a few unnecessary pounds off the body; thanks to a Katech carbon fiber decklid and Halltech GT2Z hood. The inside has been updated with a Caravaggio interior, an RSD 5-point racing harness, a Safecraft extinguisher, and a set of Haltech wideband gauges.

What amazes us most about the car is that Eric did all of the wrenching on it himself – in his own garage, with his own tools, and his own blood, sweat and tears. Obviously, he could just have easily loaded it up onto a trailer and dropped it off at the door to a big-name tuner. But that didn’t interest Eric. The only help that he received was from Brian Tooley for spec’ing the cam, doing the headwork and valvetrain, George Pennington for providing him with an additional set of hands in the garage, Jared Cocanougher of RPM for assembling the bulletproof transmission, and James Short, of ShorTuning for the Vette’s custom tune.

Naturally, the story doesn’t end there. As it turns out, Eric beat his own record just a few weeks later at RPM Transmission’s track rental at Muncie Dragway. With the addition of a 150 hp shot of giggle gas, courtesy of Nitrous Outlet, Lancaster pulled an E.T. of 9.12 at 159 mph. Of course, he couldn’t have done this without the support of his wife, friends, family, and his persistence of claiming the “King of Kings” title. Congratulations, Eric.

We meet up with a trio of Corvettes, with George Marks, Robert White, and Dave White to have a tour of San Diego, a perfect place to go to with your Corvette.

The horsepower masterminds at Lingenfelter Performance Engineering have just introduced a beefy package to add plenty of pony power to your C6 ZR1 Corvette. Designed for the General’s factory potent LS9, the Lingenfelter package increases horsepower to 750, with 730 lbs-ft of torque. Yes, 750 horsepower.

Michael Bayley's 2010 Chevy Corvette ZR1 is his project and he doesn't care what you think about his one-of-a-kind automatic ZR1. Bayley built this Corvette for himself and uses it for whatever he wants, be it track days, car shows, or street driving in either sunny South Florida or in his hometown of Selkirk, NY.

In this feature article VETTE takes a look at the Chevrolet Corvette Z06X Concept, which debuted at the 2010 SEMA show and showcases how to create a full-on C6 track car - Vette Magazine

» Read More
The 6 Hours of Laguna

Laguna Seca has a new place in the American Le Mans Series schedule and a new race format and Corvette Racing was there in 2010.