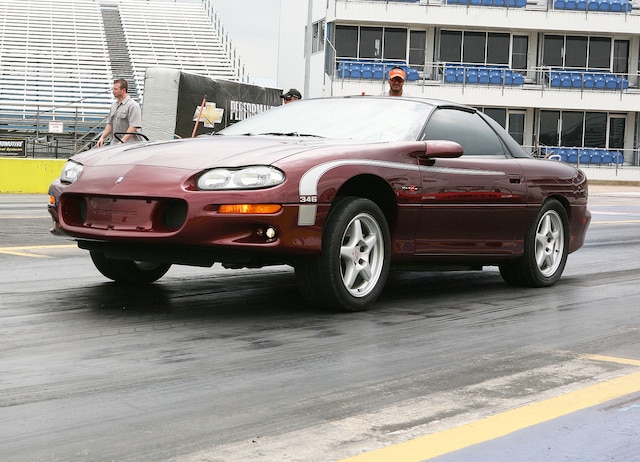 It’s an unusual color for a Z28. The Monterey Maroon hue was only sprayed onto 1,834 Camaros in the factory making it the rarest color to be produced for the model year (2002). The owner, Jeff Kmosko of Fort Worth, Texas, bought it new off the showroom floor of Classic Chevrolet in Grapevine, Texas and has since put 32,000 miles on it.

“For the first five years I drove it every day,” Jeff explained. “Then I bought another car and now I only put about 1,000 miles on it per year.”

We came across Jeff and his Camaro at the Super Chevy TX show a couple years back and were impressed by how clean the car – affectionately dubbed “Maroon Madness – was kept.

It is powered by the original powerplant, a 346 cubic-inch LS1, and has had a cam package added by Steve Addison of SNL Performance. Comp Cams titanium retainers, pushrods and roller lifters have also been added, as well as an SLP air lid and ceramic-coated long-tubes flowing through to a Flowmaster “American Thunder” exhaust system. A set of 4.10 gears reside in the rear.

The automatic Camaro puts down 365 horsepower and 368 lb-ft of torque and has run a best elapsed time of 11.88 at 114mph in the quarter-mile.

A 100 dry shot of NOS nitrous oxide was added but Jeff tells us he’s only done four passes employing it – it’s for show only.

The suspension has been upgraded using Eibach 2-inch rear springs and Lakewood lower control arms, meanwhile the frame of the Camaro has been reinforced using SLP bolt-on subframe connectors.

Look for the full story and more pictures in an upcoming issue of Super Chevy magazine!