The Illustrated Corvette Designer Series No. 200 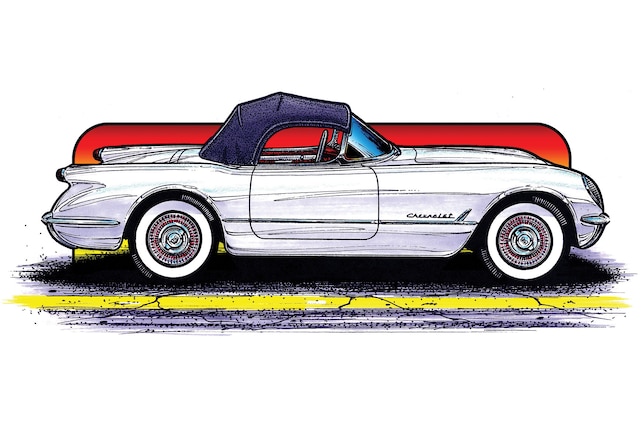 The 2013 model year may be remembered as the most extraordinary in Corvette history. Not only was it the last year of the sixth- generation model, it was also the 60th anniversary of the first Corvette. The only way it could have been better was if the hotly anticipated C7 was released as a ’13 model.

The shining star of the ’13 lineup was the 60th Anniversary 427 Convertible. With Z06 looks in a roadster configuration and the Z06’s mighty, 505hp LS7, the car was considered by many to be the best Corvette ever. Given the marque’s legendary past, that’s a compliment worth noting. And let’s not forget Corvette Racing, which, as of this writing, is poised to win yet another ALMS championship.

Finally, let’s mention sales. With the nation in a recession and GM struggling to stay afloat, things looked grim for Corvette a few years ago. And yet 2013 sales closed out at 13,466 units, up from 2012’s 11,647. Kudos to Corvette product planners for turning Corvette buying into a boutique, “build your own ride” experience.

It all goes back to 1953, when a small, white two-seater named after a warship wowed the crowds at the GM Motorama. The car was so beautiful, many wanted to buy one immediately. It was the most unlikely of vehicles for Chevrolet to build, as the brand was known for churning out “bread and butter” cars. Aside from a then-new material called fiberglass, there was nothing extraordinary about the new sports car. Mechanically it was a parts-bin mash-up, using a sedan frame and suspension with a slightly enhanced six-cylinder engine and a two-speed automatic. Chevy rushed the car into production, with 300 Corvettes rolling off the assembly line by the end of summer 1953.

These cars were expensive, leaky, drafty, and not terribly quick. Some were even given away as gifts to celebrities such as John Wayne. Were it not for the enthusiasm of a newly hired engineer named Zora Arkus- Duntov, Corvette might not have survived the ’50s. Duntov knew the car needed development, power, and racing credibility. By the time the first generation drew to a close in 1962, the Vette had undergone quite a transformation. The new 265 small-block arrived in 1955, followed by a restyling and available dual four-barrel carbs in ’56. The small-block grew to 283 cubes in ’57, and a four-speed transmission and Rochester fuel-injection option gave the Corvette a serious roar.

Try as he did, Duntov couldn’t get Chevy to go along with a factory-backed racing program. Rather than giving up, he turned his attention to designing parts that would allow buyers to race and win in their own Corvettes. The strategy worked and forged a bond with owners that lives on today.

Still, the Corvette remained on thin ice through the ’50s. Though sales increased every year, they weren’t big numbers. The first year sales broke the 10,000-unit level was 1960, with 10,261 cars sold. It was enough to get an all-new Corvette approved. The result of GM design chief Bill Mitchell’s efforts, the “Sting Ray” looked like a car from another planet. Duntov made sure the new perimeter frame and four-wheel independent suspension were a quantum leap forward as well. The public apparently agreed, as ’63 sales totaled 21,513 units. A year later, the L84 327 fuelie was pumping out 365 hp. Allied with Duntov’s special parts, it turned the Corvette into a formidable racer.

The big news for ’65 came in the form of standard four-wheel disc brakes and the all-new Mark IV 396 big-block engine. Heads spun faster than 7.75-inch bias-ply tires, as over the next several years the big-block grew to 427 and finally 454 cubes. There were plenty of variations, from a four-barrel, hydraulic-lifter setup to the fire-breathing L88 and ZL1 racing engines. With its loud side pipes, hood bulges, and megaton horsepower, the mid-’60s Corvette was truly a beast.

In 1999 Chevrolet decided to back a new racing Corvette, and the C5-R was born. After two years of development, the Corvette Racing team won Le Mans in 2001, fulfilling Duntov’s goal from decades earlier. To date the team has won its class seven times at the storied French track.

By late 1999, styling chief Tom Peters had already started sketching out the C6. The result of his efforts hit the streets in late 2004 as an ’05 model. While the car’s structure and LS2 engine were evolutionary, its sharp-edged styling was a real departure. The public loved the car, snapping up 37,372 of them, up from 34,064 a year earlier. On the personnel front, Tom Wallace took over the program when Chief Engineer Hill retired in 2006; Tadge Juechter then picked up the reins when Wallace retired two years later.

From 2006 through 2010, Chevy offered one tantalizing Vette after another. The 505-horse C6 Z06 was launched in late 2005 as an ’06 model, pushing performance to new heights. Various special editions followed, beginning in ’07 with the Ron Fellows Z06. In 2009 Chevy unleashed the first factory-built supercharged Corvette, the 638hp ZR1. It was followed in 2010 by the Grand Sport coupe and convertible, which offered the wide-body look of the Z06 with a base powertrain. The Grand Sport became the most popular model, even though a decked-out version could cost as much as a Z06.

The C7 made its debut on January 13, 2013, amid sky-high expectations. The car, dubbed the Stingray, is the most powerful base Corvette in history, thanks to its direct-injected LT1 engine. It also carries plenty of authentic competition DNA, thanks to a close developmental partnership with Corvette Racing. The seventh-gen Vette is sharp, in your face, edgy, and almost as quick as a C6 427 Convertible. And the Z06 and ZR1 editions are still to come!

It’s gratifying to see GM embrace the Corvette as its flagship model. This is, after all, a car with a near-continuous 61-year history, not to mention world-class performance stats and a genuine racing heritage. Could the Corvette be considered the most successful domestic car ever? We certainly think so.

In 1965 Mitchell unleashed the Mako Shark II show car. It was so stunning, everyone agreed it simply had to be the next Corvette. To get the car to market quickly, the chassis and running gear would be the same as the Sting Ray’s. The third-generation Corvette was rushed into production, a fact that would become painfully apparent in the end product. Sales hit a new high of 28,566 for ’68, but many customers were unhappy with the new Vette’s build quality. The ’69 models were vastly improved, and sales rocketed to 38,762. While those figures were enough to keep the Corvette viable, they were a long way from the 243,095 Camaros sold that year.

Although the C3 Corvette rode on the C2’s frame and drivetrain, the car quickly became an American icon. The 327 small-block grew to 350 cubes in 1970, while the 427 swelled to 454 the same year. Despite a ballooning curb weight and plummeting power figures through the ’70s, the Corvette became more popular than ever. Where other cars had heavy chrome bumpers, the Vette was restyled with soft bumper covers that blended with its shape. In 1978 the roof was redesigned with a beautiful glass-bubble fastback that freshened up the car’s looks while Chevy worked on the upcoming C4. Though performance was way off by the late ’70s, ’79 sales hit an all-time high of 53,807 cars.

Sales remained strong into the early ’80s, but the Corvette was overdue for a change. The ’84 model was paradigm shifter with its chiseled looks, ultra-wide tires, and race-car suspension. The 350 “Cross-Fire” injection engine was a carryover, but the new underpinnings and structure wowed the press with a 1g skidpad performance.

For the next 13 years, Chief Engineers Dave McLellan and, later, Dave Hill and their teams honed and refined the C4. A Bosch “Tuned Port” fuel-injection system was introduced in 1985, followed by a convertible model and aluminum cylinder heads in ’86. A year later, the first ever non-Chevrolet-installed option, the B2K Callaway Twin Turbo package, was offered. This option bumped the 240hp L98 up to an awesome 345 hp and 465 lb-ft of torque. All the while, McLellan and his team were working with Lotus and Mercury Marine to develop the DOHC LT5 engine for what would be the most expensive Corvette to date: the 375hp ’90 ZR-1. The base engine got an upgrade a few years later, when the 300hp LT1 supplanted the 250hp L98 in 1993.

By the early ’90s, sales had leveled out at around 20,000 units a year, and it was time to develop a new Corvette. But the economy was in a slump, so for a time the C5 was an on-and-off project. Hill, who took over at the end of ’92, did his best to keep the C4 relevant while making progress on the C5. The ZR-1 was offered through ’95, by which time only 6,922 examples of the Corvette supercar had been built. The C4 generation got a pair of special editions to see it off in ’96. The silver Collector Edition was an open-order option, while the smashing, white-on-blue Grand Sport was limited to 1,000 units.

The ’97 C5 was the first new Corvette with no carryover parts. Hill’s team designed the car with efficiency in mind, using some 1,200 fewer parts than on the C4. The suspension was lightweight and attached to a hydroformed steel frame. But the big news was the new all-aluminum LS1 small-block mated to a rear-mounted transaxle. This was the car Duntov had envisioned 40 years before with the ’57 Q-Corvette.

Because the C5 was designed from the outset as a roadster, a topless version arrived just a year after the coupe. While the ’99 hardtop model was originally intended to be the “inexpensive” Vette, it turned out to be only $394 less than the base coupe. Sales were soft, with only 6,120 units sold in two years. The hardtop’s structure was stiffer than the coupe’s, however, making it an ideal platform for the Z06 performance model that bowed in ’01. Its LS6 engine was rated at 385 hp initially but climbed to 405 hp in ’02.