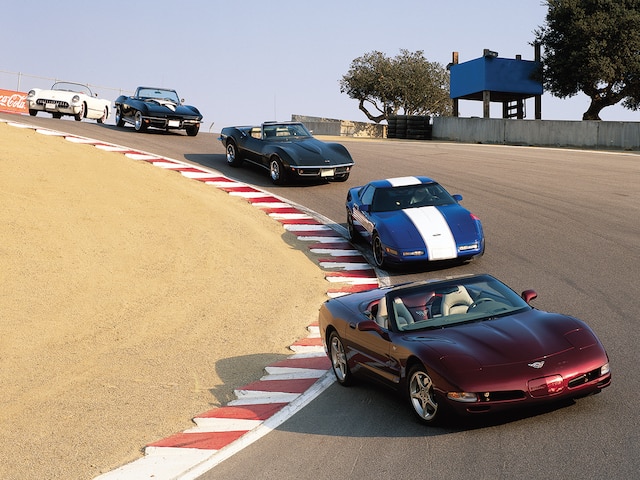 Financial trouble within GM and a shuffling of the major players high up the corporate ladder resulted in yet another delay for a redesigned Corvette. The car's fifth generation was originally scheduled to debut in 1993, to mark the Vette's 40th anniversary. When the dust finally settled, it would be another four years before the C5 was finally unveiled to the public at the 1997 North American International Auto Show in Detroit. A long wait, yes, but worth it by all accounts.

Ad writers and marketing types love to tout any redesigned, refurbished, or even slightly modified car model as "all new." But that term truly applied to the 1997 Corvette, perhaps more so than at any other period in the car's history. And that includes the very first models. Groundbreaking as they were, they relied on a lot of Chevy parts-bin components to get on the road in 1953.

Not so the 1997 Vette. Except for the automatic transmission, everything about the car was new. From a styling standpoint the car was unmistakably a Corvette and yet far sleeker than the C4 models that came before it. It didn't just look more lithe, either: Wind-tunnel tests confirmed the car's drag coefficient dropped substantially, from 0.34 to 0.29.

Beneath the slippery skin, the C5's foundation consisted of a hydroformed perimeter frame with a rigid center tunnel, far stiffer than the previous chassis, which helped solve some of the squeak and rattle problems that plagued earlier cars. Instead of a conventionally mounted transmission, the C5 made use of a rear-mounted transaxle, creating close to an ideal 50/50 front-rear weight balance. Double- wishbones were employed at all four corners, sprung by a composite transverse monoleaf spring at each end of the car.

Small-block V-8 power had been a key component of each Corvette's personality since 1955. In keeping with the "all new" theme of the C5, the 1997 Vette was home to GM's brand-new Gen III V-8, a 5.7-liter engine that shared displacement with its LT1/LT4 predecessor but little else. Dubbed the LS1, this all-aluminum mill featured cross-bolted main bearing caps in its deep-skirt block, a smaller bore and a longer stroke, replicated (rather than siamesed) ports to make flow rates consistent from cylinder to cylinder, sequential port fuel injection (with a new electronic throttle control), separate ignition coils for each spark plug, and tubular exhaust manifolds. The new engine weighed 44 pounds less than the LT4 and produced 345 hp, up from the LT4's 330.

Given all that innovation—and glowing reviews from the automotive press—it's surprising that the first C5 wasn't a bigger success at the showroom. Just 9,752 units were sold that year, less than half of what the 1996 model sold. (The decline was due in part to an abbreviated 1997 model year.) It didn't take long, though, for the public to warm up to the car. A year later sales more than tripled.

Budget constraints kept the Corvette design team from developing a C5 convertible concurrent with the coupe, but the drop-top arrived just a year later, solid and shake-free thanks to the C5's rigid subframe. Chief Engineer David Hill mandated that the top mechanism be manual, not power-operated, to save two things: cost and space. Why space? With the new topless model came a trunk, a feature not found on a Corvette since 1962.

Chevrolet followed up the convertible with something completely different for 1999: a hardtop body style. Though it was at one time envisioned as a budget model of the Vette, the hardtop instead became a performance variant, as it weighed less than the sport coupe (by some 80 pounds) and was 12 percent stiffer. By limiting some equipment and options availability, the hardtop did wind up costing less than a coupe, but only by a few hundred dollars. Performance-wise the car was just a tick or two quicker, though that would change in a couple of years.

The 1997 Corvette was the embodiment of the term “all new” when it debuted at the North American International Auto Show in January 1997. Just the four-speed automatic transmission carried over from previous models; everything else was completely revised.

Chevrolet brought back two storied names from its past—Z06 and LS6—when it created the Z06 hardtop model for 2001. What Chief Engineer Hill wanted from the Z06 was a no-compromise performance Vette, but one that didn't command the steep premium that the ZR-1 did in the 1990s. Starting with the lightweight and stiff hardtop body, the Z06 added a heavy-duty suspension; wider, model-specific wheels; massive Goodyear Eagle F1 tires; and brake ducts front and rear. (The wheels and telltale crescent-shaped ducts in the rocker panels make it easy to spot a Z06 at a glance.)

The revived LS6 moniker (originally used on a big-block option in 1971) was applied to an LS1 that had been hot-rodded with higher compression, improved cylinder heads, bigger injectors, a more aggressive cam, and an opened-up intake. All that tuning raised the horsepower output to 385, from the stock LS1's 345 hp, and brought peak torque to 385 lb-ft, from the stocker's 350 lb-ft.

The combo of a lightweight car, a hot motor, and fat tires was magic. Zero-to-60 times dropped to the 4-second range, the quarter- mile went by in the mid 12s, and the Z06 could pull a full 1g on the skidpad. Remarkably, all this performance was priced at just $500 more than a Corvette convertible.

But the Corvette team wasn't done with the Z06 yet. In 2002 the LS6's output grew to 405 hp and 400 lb-ft, thanks to intake and camshaft revisions and the removal of two of the car's four catalytic converters to relieve backpressure.

While the Z06 got the lion's share of attention during these years, the standard Corvette also enjoyed a bump in output in 2001, as a new intake manifold for the LS1 brought horsepower up to 350 and torque to 360 for automatic-equipped cars, 375 when backed by the manual transmission. The active-suspension option was also made standard equipment that year, improving handling across the line.

A 50th birthday is something special, and Chevrolet chose to celebrate the Corvette's golden anniversary by starting the party off a little early. A Corvette was once again chosen to pace the Indy 500—but in 2002, not 2003.

For the 2003 model year, all Corvettes wore 50th anniversary badges, and the factory once again produced an anniversary edition. This time around the package included special Anniversary Red paint, champagne- colored wheels, and gray-beige leather upholstery. The option was available on coupe and convertible models, but not the Z06.

Not all the options on the anniversary models were cosmetic. New for 2003 was Magnetic Selective Ride Control, which replaced conventional shocks with dampers filled with magneto-rheological fluid. The iron particles in the fluid reacted with an electric charge transmitted through the shock's body to change viscosity and damping at an incredible rate—up to 1,000 adjustments per second, according to GM.

Unlike in the 1960s, when the corporation was officially out of racing and Duntov had to back-door cars, parts, and support to privateer teams, Chevrolet announced a factory-backed Corvette endurance road-race program in 1998. The first two C5-Rs made their competition debut at the 24-hour Daytona race in 1999, and the car driven by Ron Fellows notched a Third Place finish—an outstanding debut. From there, the C5-Rs built some serious momentum, hitting their stride in 2001 with an overall win at Daytona, followed by First and Second Place finishes in the GTS class at Le Mans, as well as the American Le Mans Series Manufacturer's Championship. The C5-Rs repeated their ALMS championships again in 2002 and 2003.

The 2004 Commemorative Edition honored that achievement with packages available for all three Corvette models. Coupes, convertibles, and Z06s could be painted a special Le Mans Blue; the Z06s would also get a carbon-fiber hood plus hood, roof, and trunk stripes that emulated the graphics on the competition models.

Chevrolet was justifiably proud of its C5 Corvette, with Chief Engineer Hill often calling the car the "best Vette yet." The operative word there, though, was "yet." Good as the C5 was, Hill was already hard at work on an even more refined Corvette when the C5 was just in its second year of production.

In its June 2003 issue, Motor Trend gathered 10 of the world's fastest cars for a performance shootout. Representing Corvette this time was a Z06, which Trend called "the best Corvette to date. Why? Because it's exotic-car fast and allows you to run with all the big boys from Europe at a fraction of their exotic-car prices."

It took a year before the C5 was offered in a convertible version. Motor Trend Editor C. Van Tune took a soft-top 1998 Vette on a 1,700-mile exploration of Route 66 (or what was left of it, anyway) and, in the October 1997 issue, called it “an unbelievably comfortable-riding grand tourer. Toss in the bargain price tag, and you have one of the best excuses to spend your money since the introduction of the split-window Sting Ray.”