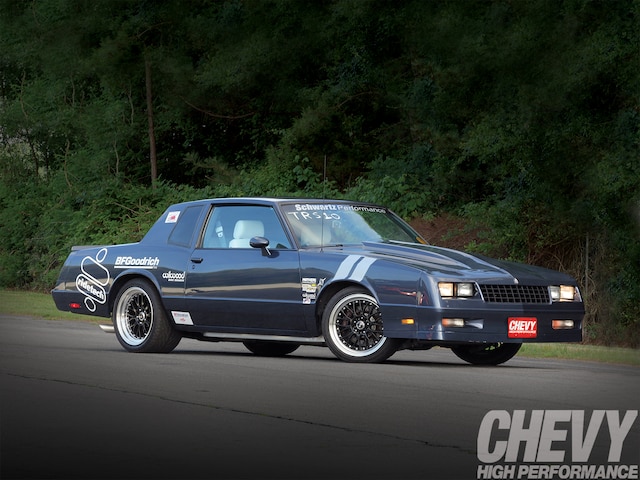 It's still the same old story, a fight for love and glory, striving for individualism in a numbingly tedious world of utter sameness. Today, everybody wants to swing that hammer and make sparks at midnight, everybody wants their time in the sun and there are those on the outside that have made the goal that much easier to achieve. There's nothing like a widely-supported, highly-charged agenda as well as constant reinforcement from popular buff books like CHP to keep the pilgrims amped: "You can do it. Go do it now."

Iowan Daniel Howe, no stranger to this world, learned on an eclectic mix: 1968 Cougar, 1957 Bel Air, and a 1978 Camaro LT. But Daniel didn't earn a living by building cars. He didn't know how to weld. Had never used an AN fitting in his life. And until he considered the LS1 powerplant, he'd never stepped beyond a carbureted small-block. So at mid-life, he changed all that with his 1984 Monte Carlo SS.

It was an offering on eBay, all original and rust-free, a tantalizing oddity that had lived in Chicago its entire life. Then he and his son Josh went to the 2011 Car Craft Summer Nationals in St. Paul, Minnesota, and everything began to morph. At Josh's insistence, Daniel approached chassis whiz and car-builder Jeff Schwartz about a firm foundation for the Monte. Jeff responded: so happened he needed a G-body for development work. And the warm wind began to blow.

The chassis proved pivotal. Howe said, "The chassis is a bolt-on, no modification to the floor pan required. The spare tire well in the trunk needs to be removed and the fuel tank centered if you plan to use wide tires. When I got [the car] back home (a barn built in 1921 and without a lift or fancy tools), I proceeded to cut and extend the rear tubs from a plan I'd found on the Internet, but had to wait for Josh to come home over the weekend to weld them up. When Josh saw what I had done, he said it would never go back together. Well, he was wrong and admitted it when we were done and then proceeded to the other side."

"With a state-of-the-art chassis under the car, a faded paint job wasn't going to cut it. Luckily, Josh was attending Hawkeye Community College in Waterloo, Iowa, for auto collision and refinishing. He had never painted a complete car and his experience was pretty short. The Monte would be his final project, his final exam as it were. I think he nailed it."

Concurrently, Daniel had acquired a failed father/son project LS1 and 4L60E combo for a sweet $1,400 total. The motor had 10.5:1 Mahle pistons and some head work. Daniel inserted a spicier LS1 cam and an LS6 intake manifold. A jaunt to Florida in 2013 produced a spun rod bearing. Back in Iowa, Daniel sent the wounded critter to AEM Race Engines. Their proven panacea was a stronger internals and larger lungs.

"Daniel reports that the Monte will soon have a stable mate, an '86 El Camino, also with a Schwartz G-Machine chassis." Will wonders never cease?

Power
After the starter bullet misfired, AEM in Waterloo, Iowa, rebuilt it with a Callies Compstar forged steel rotating assembly and stroker crankshaft to bring displacement to 383 ci (3.903 x 4.00). Compression ratio via the JE forgings is now 11:1. The instigator is a Comp roller (0.610/0.617-inch lift/223/231 degrees duration at 0.050). AEM zipped up the bottom end with an F-body oil pan and GMPP oil pump and pick-up. They ported common 241 cylinder head castings and retained the 2.00/1.55 valves, rocker arms and pushrods but set the stage with Patriot valve springs and titanium locks and retainers. Fuel delivery to the LS6 intake manifold is plotted via an FAST XIM controller and 60-lb/hr injectors. Waste products are processed by F-Body Pacesetter 1¾-inch full-length headers that were modified to fit with new one and three primary pipes and a simple dimpling of number five. The system aft is composed of a Jeg's 3-inch universal exhaust kit, X-pipe and Moroso Spiral Flow mufflers. ARP fasteners were used throughout. AER gathered the accessories with a Wegner serpentine connecting A/C compressor, alternator and power steering pump. Cooling comes easy with a DeWitt's radiator equipped with SPAL fans. West Bend Dyno Tuning in West Bend, Wisconsin, did the final tweaks, producing 422 lb-ft of torque at 4,144 rpm and 405 hp at 5,580 rpm despite inadequate spark advance.

Drivetrain
Jeff Nibaur over in Elma, Iowa, built the 4L60E transmission and included a 3,200 rpm stall speed TCI Street Fighter converter, A B&M Megashifter in league with the TCI steering column paddles and added insurance with a remote Derale fluid cooler. Sadler Power Train, in Waterloo, built the driveshaft. At the end of the line, A Moser full-floating 9-inch twirling 3.50:1 gears on a Detroit Truetrac differential.

Interior
This car is a driver absolutely, hence worthy creature comforts such as full-on audio (Panasonic head unit, Infinity front speakers and Pioneer in the rear) and factory air conditioning. Daniel replaced the OE gauge pack with a Dakota Digital VXH compilation. The front seats are Procar Elite 1100s covered by Diane Stolfus in Lawler, Iowa, in very bright vinyl. After Daniel had modified the rear seat frame to clear the tubs, Diane stitched up the bench to match. The steering wheel is from Grant and the carpeting, floor mats, and miscellaneous parts came from Mike's Montes in Versailles, Ohio.

Body
Daniel's son Josh became the sheetmetal steward, smoothing the flanks, swabbing the crannies, and adapting the Goodmark 2-inch cowl hood. All else is stock. He applied the DuPont Chromapremier Medium Dark Royal Blue as well as the Silverworth Gray GS-style fender stripes.

Chassis
Jeff Schwartz used to routinely embarrass Porsche drivers with his full-size Cadillac. Over the past few years, he's acquired a loyal following and has taken that notion much higher with Schwartz Performance in Woodstock, Illinois. Among chassis for other vehicles, he builds a replacement space frame for the G-body, replete with less weight than the original, much greater torsional strength, and custom control arms in conjunction with SP spindles. The RideTech suspension is not based on adjustable air but rather by mechanical means, in this case single-adjustable coilovers. The anti-sway bars are splined.

Brakes & wheels
Including large brakes was a given. Daniel went for 13-inch Wilwood plates all around and fitted them with 6-pot and 4-pot calipers, front-to-rear. Those red semaphores are barely detectable beneath the XXR 521 hoops--18x8.5 front and 18x12 rear (the latter expanded by Weld Craft Wheels from the original 10-inch width). Dimensions of the attending BFG KDW friction material are 275/35 and 335/30.

Check out this custom 1984 Chevrolet Monte Carlo, brought to you by the experts at Chevy High Performance Magazine

This custom-built, LS3-powered 1977 Monte Carlo makes about 625 horsepower and is nothing like anything you’ve seen before.