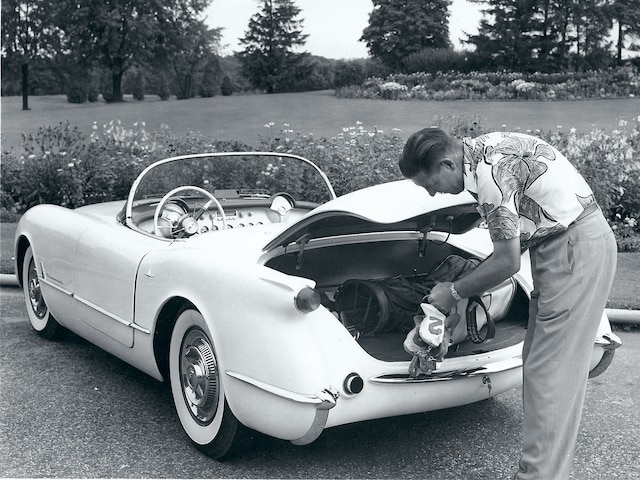 "This is Chevrolet's Corvette, a 102-inch wheelbase customized two-passenger convertible which will be introduced at the General Motors Motorama of 1953 at the Waldorf-Astoria Saturday, Jan. 17. The Corvette has a glass fiber reinforced plastic body, gleaming white with the minimum of chrome. Interior is trimmed in white and bright red leather."

So reads the caption that was taped to the back of this GM press photo we found in the Motor Trend archives. While it identifies the Vette in the photo as the Motorama show car, the shape of the fender spear leads us to believe this was a production—or possibly pre-production—model. It's possible, too, that the caption taped to the photo didn't actually go with this particular shot. Those things happen as archival materials are organized and reorganized over 50-plus years and several office moves.

Someone at Chevrolet obviously wanted prospective buyers to know the two-seater had a trunk, one spacious enough to hold two bags of golf clubs. That kind of cargo capacity, though, fell lower on the Corvette engineering team's priority list as the car transformed from boulevard cruiser to serious sports machine. The trunk disappeared entirely when the C1 body style gave way to the C2 in 1963, and it would be more than three decades before a Vette—the 1998 convertible—had a trunklid again.