The Camaro ZL1 that GM should have built! 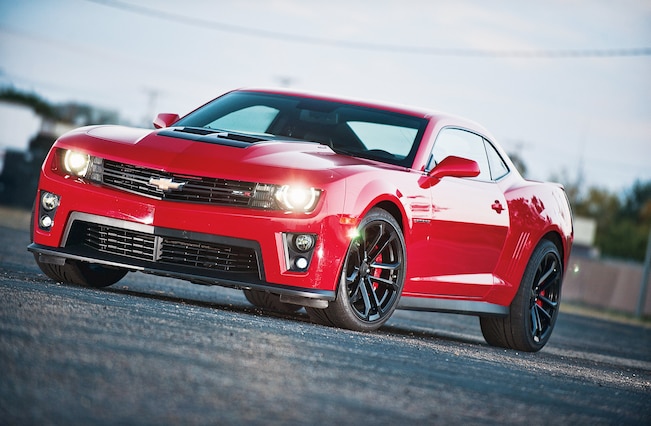 At first glance this red ZL1 isn’t anything special. It’s almost subtle when you think about it. A base stock Camaro with a body kit, sure it isn’t really any different than any other ZL1 on the planet right now. Looks are about the only similarities you’ll find between Ray Lichtenberg’s ZL1 clone that he playfully calls his “ZLR” and one you can buy off the show room floor from your local Chevy dealer.

Subtle isn’t quite the right word to describe the ZLR, it’s hard to put into words. It’s more of a feeling you get, like being kicked in the teeth with the business end of a hockey skate (ask us how we know). That’s the kind of subtle you get with Ray’s ZLR. He graciously (or stupidly, we’ll let you be the judge) let us at Camaro Now take the keys for an entire day and have a bit of fun. There’s no good word to really accurately portray how much fun (and slightly scary) this car is to drive. It’s literally like being kicked in the mouth by pure unadulterated awesome.

You see, this Camaro didn’t start out life awesome, far from it actually. Ray had to massage that awesome into it. He’s a body man by trade and decided to take matters into his own hands.

“From the first 5th gen renderings, I was hooked! I couldn’t afford a new one in ’09 so I had to buy a used one, let the modding begin!” Ray goes on with exuberance, “After I noticed the ZL1 coming to life I had to have it. I already had a LSX427 in the works and had to start collecting body parts before the ZL1 came out, before I knew it I had 80% of the parts.”

For those with a sharp mind and eye, you’ll take notice that GM doesn’t make a LSX427, only the LSX454. Ray wanted to keep the 427 heritage alive and why not? Such an iconic number can produce fear in the hearts of just about any Mustang owner. But like any good infomercial, but wait! There’s more!

That LSX427 isn’t just a destroked 454 to be a little bit more rev happy. This is a full on custom build with a Magnusson RDS hybrid supercharger that makes an very respectable 678-rearwheel horsepower and an earth rotating 770 ft-lbs of torque at 8 psi. From our little ‘test’ you could call it while trying to merge into busy traffic, we can tell you that the old butt-in-seat-dyno can attest to the impressive low end torque. Ray himself builds a proprietary phenolic spacer for just that supercharger which he put on this car to prove his point.

The giant 15-inch Baer brakes help keep wraps on those ponies lying beneath the carbon fiber ZL1 hood. But let’s be fair, having 20’s on a car that isn’t this fast would just be Onanism. Thankfully it rides just as smooth as it looks and despite having the low profile Goodyear F1’s, this car glides like a dream.

Ray just isn’t a one crazy car owner, far from it actually. His cavalcade includes a 1,000 horsepower supercharged Suburban, a V8 swapped S10 and a 400-horsepower turbo charged 2008 Cobalt he built for his daughter. Just before we reluctantly (more like had to pry from our stony death grip) handed back the keys of Ray’s ZLR, he told us that he just picked up an LS7 that is destined for a supercharger. Who knows what his next beastly project may be, but if it’s as superlative filled as this, we’ll be in forever manly bro-love.