The Chevrolet SS is American muscle with an Australian accent 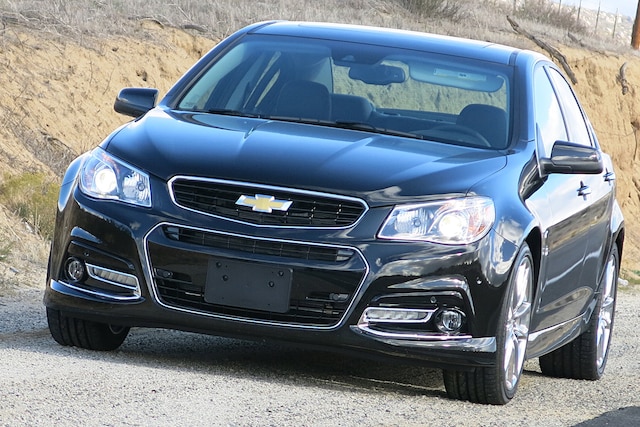 It’s been 18 years since Chevy offered a five- (or six-) passenger, rear-wheel-drive sedan and it’s been 44 since it offered one with serious muscle under the hood. Well, that drought has come to an end, thanks to the Chevrolet SS, an American muscle car with an Australian accent.

Developed with GM’s Holden counterparts in Australia, the SS packs LS3 power with 415 horsepower and 415 lb-ft of torque—the first five-passenger Bow Tie since the legendary LS6 Chevelle of 1970 to boast of those kinds of numbers. Perhaps more importantly in this day and age, it has handling capabilities that can shame German competitors costing twice as much and accommodate large adults in comfort.

To address some things we’ve read on social media outlets, the SS is not just a rebadged Pontiac G8 GXP. Though it’s based on the same platform, it has received serious upgrades and enhancements—some more subtle than others. For instance, the use of aluminum for the hood, decklid, steering column structure, suspension components and other areas trims 150 lbs from the car’s architecture. This improves handling, steering feel and straight-line acceleration.

The interior is significantly quieter, the structure is stiffer, and the controls are designed for Americans (the power lock and window buttons are on the door instead of the center console and the volume knob is on the left side of the radio, not the right). The leather, ultra suede—all interior materials, for that matter—are significantly improved over the dear, departed Pontiac. The entire car is much more refined than the old G8 family.

Bad news? There will be no two-door offered. There’s no such version of this car produced anywhere in the world, and with the demand for four-door cars far out-stripping two-doors, there’s no way the make the numbers work financially. Production will be limited to about 4,000 units annually and there’s no manual transmission offered. According to David M. Leone, GM’s Executive Chief Engineer for Performance Luxury Vehicles, the take rate for a stick was expected to be so low (in the hundreds), there was no way to make a business case for it. It would be a money loser and there’s no room for that at the post-bankruptcy General.

Nor will an El Camino version of the Holden Ute be coming this way. Again, it is simple economics. Demand is limited and the amount that would have to be spent to federalize the rear half of the car to meet U.S. crash standards (among other things) would be too dear, according to Leone.

As for the styling, it’s definitely on the conservative side—and that’s putting it mildly. The basic shape is fine, but it is a lot less aggressive than its main rival, the Dodge Charger R/T (and SRT8). The nose and tail are easily recognizable as part of the Chevy family of sedans, but we’re not sure that’s a good thing. Seems like with this kind of performance and handling, it could be a bit bolder. We’re not talking adding wings and air dams and side skirts, mind you. Just seems like the designers could have made it edgier. Chevrolets claims that at the rear, the tapered, tear-drop shape contributes to improved aerodynamics. The standard high-intensity discharge headlamps and light-emitting diode daytime running lights add a definite touch of class (and a functional one at that). The SS is offered in five exterior colors: Silver Ice Metallic, Red Hot 2 (a non-metallic bright red), Phantom Black, Heron White and Mystic Green Metallic (a light metallic green).

That’s about it as far as the negatives goes. Climb in, close the door, and you find yourself enveloped by a soft, supportive black leather sport seat with red French stitching. There are ultra-suede accents on the doors and dash and your hands grab ahold of an extremely fat-wrap steering wheel with a flat bottom.

The new SS is based on its proven, global rear-wheel drive architecture that is the foundation for the Camaro, Caprice Police Patrol Vehicle and Holden’s VF Commodore. The outstanding LS3 is matched with a 6L80 six-speed electronic automatic transmission that can be shifted manually using paddles mounted on the steering wheel. The rear gear ratio is 3.27:1, which doesn’t sound like much until you take into account that First gear in the trans is an ultra-low 4.03:1, making the car explosive off the line. Chevy claims a 0-60 time of about 5-seconds and we figure this is probably pretty conservative after driving it for a day. We’d also be shocked if it couldn’t turn the quarter-mile in under 13-seconds, making it even quicker than the fabled LS6—that’s pretty elite company. Redline is 6,600 rpm and engine oil and transmission coolers are standard.

The suspension is comprised of a MacPherson strut front and multi-link independent rear suspension. The steering (as on virtually every new car) is electronic power assist and frankly, it’s outstanding. We attacked the mountain roads outside Palm Springs, California, and the steering feel was the perfect complement to an amazingly well sorted suspension. Handling is also optimized with a nearly 50/50 weight distribution and a low center of gravity—attributes made possible in part by the aluminum hood and rear decklid that are 30 percent lighter than traditional steel panels.

Stopping power comes from rather large 14-inch ventilated Brembo front brakes, with two-piece rotors and four-piston calipers. Out back are 12.7-inch rotors. Keeping the brakes off the ground (and us from flying off those mountainous roads) are sweet-looking forged aluminum wheels, wrapped in ultra-high-performance Bridgestone tires. The rolling stock measures 19 x 8.5-inch wheels with 245/40ZR19 tires in front; 19 x 9-inch wheels with 275/35ZR19 tires at the rear. These are summer tires and they never seemed to run out of grip.

The interior of the SS will definitely accommodate five adults—with 39.7 inches of rear legroom it’s not just for kiddies. You can have any color interior you’d like, as long as it’s black. Leather seating surfaces are standard, as are eight-way power adjustable front bucket seats with additional side bolstering that hug the driver and front passenger in tight-handling situations. The SS emblem is prominently stitched onto the soft-touch instrument panel which features two types of chrome finishes – a satin gloss and bright chrome. At night, the interior is illuminated by ice-blue ambient lighting. An electric parking brake frees up additional space in the center console. The car’s only options are a power sunroof and a fullsize spare tire.

The SS’s steering system employs a variable-assist electric power steering system (EPS) that saves fuel by drawing energy only when the wheels are turned. The variable-effort design provides lighter parking efforts at low speed and greater effort at higher speeds, for a more direct steering feel. The system is also calibrated to detect constant driver steering wheel load due to factors such as road camber and crosswind. The system will compensate to reduce steering effort to a more neutral.

If you never learned to parallel park, the SS is also the first Chevrolet to offer Automatic Parking Assist, which provides hands-free parking help. This standard features uses an ultrasonic sensing system to detect the width and depth of either parallel or reverse right-angle parking spaces. While the driver controls the throttle, transmission and brake, Automatic Parking Assist controls the steering inputs necessary to park the vehicle.

Oh, and about the SS name. This is the first time SS has been used as a model name and not a model designation. Why? According to Leone, it fit in with Chevy’s marketing plans. They couldn’t call it the Impala SS because the Impala name was being used on another vehicle. Caprice SS didn’t seem to make any sense, especially since the Caprice name is used on the larger police-only version of this platform. Plus, Caprice SS was really oxymoronic. Chevelle didn’t work because that was always a name attached to a midsize car and the SS is (by EPA classifications) a fullsize automobile.

“SS supports Chevrolet’s performance car strategy. The name is clean and the person who buys this car will be proud to call it that,” Leone said.

The Chevy SS sport sedan is a neat little four-door and Chevrolet’s first rear-drive performance sedan since 1996. Under the hood sits GM’s LS3, 6.2L small-block V-8, which is SAE certified at 415 horsepower and 415 ft-lbs of torque.

Hennessey is at it again! Recently HOT ROD showed you several of their bonzai runs down the Houston Grand Parkway, most recently in a 2014 Chevy SS. Now they have taken the same car down the quarter mile with 11-second ETs.

2014 Chevrolet SS Sedan - Video Review. We take a tour inside and outside the all-new RWD 4-door Chevy.

Chevrolet Performance Hosts Invitation Only Media Party at SEMA 2013. We take a sneak peek at the upcoming COPO Camaro, Z28, and SS sedan.

Check out the September 2013 edition of The Buzz where we discuss the pricing of the 2014 Chevrolet SS, horsepower of the 2014 Corvette Stringray, and the midsize luxury design of the 2014 Cadillac CTS.

Chevrolet announced today that the suggested retail price for the 2014 Chevrolet SS sports sedan is $44,470.