The L98 Engine - "Last Of The Classic Small-Block Chevys"

The Illustrated Corvette Designer Series No. 197 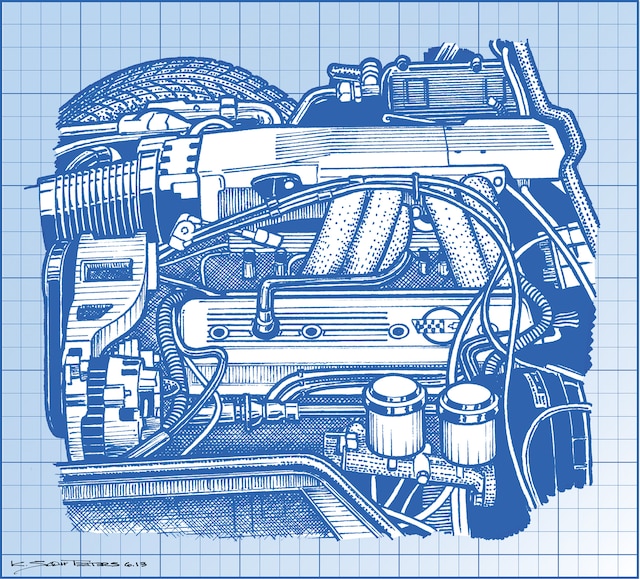 Things improved a bit for 1982, with the introduction of the 200hp Cross-Fire Injection engine. Its intake manifold was a variation of the old dual-quad cross-ram unit from the Camaro Z/28, but with two computer-controlled injectors instead of carbs. This was considered a "wet"system because the injectors squirted fuel into the plenum, rather than the combustion chambers.

The Cross-Fire engine was initially used in the new C4, albeit with a different air-cleaner cover and a few tweaks to bump output to 205 hp. The rest of the car was so good, no one seemed to mind the carryover engine. The following year, Chevy introduced the L98, a genuinely modern fuel-injected engine that looked the part.

The L98's induction system gave new life to an old, but sound, design. The intake tract terminated ahead of the radiator, away from engine heat. Inducted air passed over a mass airflow sensor, through a dual-blade throttle body, and into a large intake plenum. From there, eight cast-aluminum runners curled down under the fuel rails and connected to an aluminum manifold base, where the injectors resided. A vastly more powerful computer coordinated the delicate interplay between air, fuel, and ignition inputs.

The basic "ram"system was much the same as on the old injected Can-Am cars, only modified to fit under a low-profile hood. In addition to packaging requirements, it was adapted to deliver low emissions, excellent fuel efficiency, and ample low-end torque.

The fuelie was back, and power was up to 230 horses. More important was the 40-lb-ft bump in torque, up to a peak of 330 lb-ft at 3,200 rpm. The difference in engine characteristics between the '84 and '85 cars was dramatic, with the latter now capable of a genuine 150-mph top speed. That figure made it the fastest base Corvette to date.

For the next seven years, Chevy made incremental improvements to the L98. Midway through 1986, new aluminum heads brought a 40-pound weight savings and a 5hp output improvement, thanks to an increase in compression from 9.0:1 to 9.5:1. Out on the track, the torquey, reliable L98 Corvette proved virtually unbeatable, earning itself an eventual ban from the SCCA's Showroom Stock class.

A new hydraulic roller valvetrain brought another 5hp increase in 1987, while low-restriction mufflers tacked on an additional five horses (3.07-geared coupes only) a year later. There were no changes for 1989, but '90 Vettes climbed as high as 250 hp thanks to a return to speed-density air metering and other revisions. C4s were still winning races, and no one was complaining about street performance. So sound was the fundamental design of the L98, in fact, that it was chosen to serve as the basis for the Callaway Twin-Turbo package.

Since the L98 was retired at the end of 1991, a total of eight new SBC variants have been introduced, with each one raising the bar on Corvette-engine performance. Will the C7 generation continue this trend of steady improvement, perhaps yielding a 700hp ZR1 model? With the C7's 460hp LT1 serving as a starting point, I'd say the odds are very good indeed.