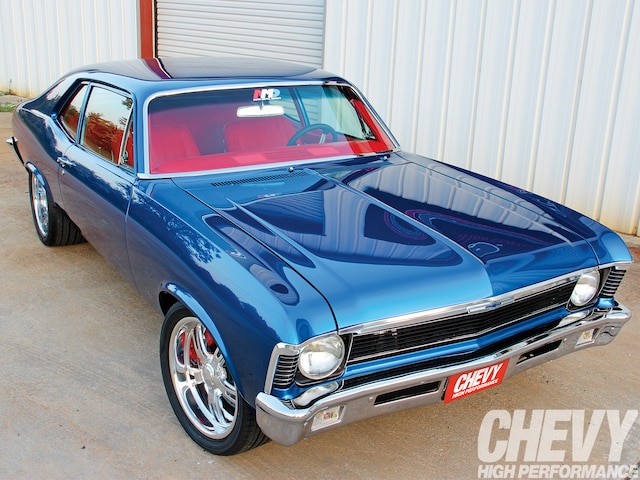 Earlier this year we spent a week at the Auto Metal Direct Installation Center in Georgia where we documented the assembly of a 1969 Camaro project car for an ongoing build. While we were snapping photos of shop owner Craig Hopkins equipping the nose-less F-body with new fenders, radiator support, and hood; we also took notice to the super clean early ’70s Nova that was being thrashed on by his brother Paul in the background. Some prodding revealed the car was destined for the Hot Rod Power Tour in just a few days. As the week went on, the long list of tasks on the dry-erase board shrank, and we were there to shoot it before its maiden voyage. The plan was for Paul and Craig to pick up their brother Lance at the first stop of the tour in Arlington, Texas, and from there they would take the freshly built, 600hp monster on a 2,700 mile trip. Even with the threat of thunderstorms and a chewed axle bearing (which happened just before the trip), the brothers were driven to take the AMD muscle machine on this year’s Hot Rod Power Tour.

The Nova’s revamp started like all the cars that get wheeled into AMD’s installation facility (Cleveland, GA); as a hacked-up shell. “Mark Headrick at AMD wanted to start offering Nova parts and I knew we had one sitting in a field that would be perfect,” Hopkins said. With that decision the Nova was destined become a TV star too, as Hopkins and crew assembled it in Season 9 of the television show, Chop, Cut, Rebuild. Using new sheetmetal from the AMD line, the team was able to make the Nova not only whole again, but they ended up putting together one seriously fun street car that can go anywhere.

The real assessment of the car came when cruising at high speeds over the beaten roads of Middle America. “We put a close-ratio steering box in the car, which is great for autocross, but at high speeds you really have to pay attention; with a flick of the wrist it can change lanes on you,” Hopkins said. You can bet going fast over bumpy roads kept the driver awake during the long trek. The car’s Grimes Racing LQ9 makes very close to six-hundo hp and at least that much in torque; so when combined with the 5-speed’s gear ratios, it makes every time you kick the clutch a tire-broiling blast. “The car really pulls hard in the first four gears,” Craig said, “but the overdrive is too much of an rpm drop to keep you planted back in the seat and you feel it fall off. Mind you this is all experienced with three adults and all of their gear in the car; yes, the trunk was completely full and yes, we had a cooler with food, drinks, and ice. Got it up to triple digit speeds, though; it is wicked-fast.” Craig went on to explain how all of the fresh suspension makes the car very predictable and really grabs road.

Besides running through a rainstorm in Chattanooga and repairing a leaky clutch master, the Hopkins brothers accomplished the tour without drama, made some cool car memories, and of course, burned a whole lot of gas. Currently, the Nova is the flagship for Auto Metal Direct and is being shown at various car shows and events across the South and Midwestern states, but if you see this pristine machine in person, know that this isn’t some trailer queen being hauled around only to be backed on and off a trailer, this beast is a fully capable resto-mod that has nearly 3,000 miles of burning rubber and making noise under its belt. “People really seem to like the car. The red interior, the shaved side markers, and the mixture of 1969 and 1970 Nova pieces really gets attention and I think folks respect that we took the car on such a long haul,” concluded Craig.

The engine is a meticulously re-worked LQ9 engine that Gary Grimes at Grimes Racing Engines put together for the project. With the factory 6.0 liters, the beast made 590 hp and over 475 lb-ft of torque. The GM castings were reworked at Grime’s shop where flow was improved, especially at low cam lift. The compression is around 10.9:1 and the hydraulic roller cam is a Grimes-spec’d grind specifically for a manual trans that really makes the car growl and roar appropriately. GM’s carbureted single plane manifold topped with a Grimes-modified Holley 750cfm carburetor were chosen for induction and the full length 1-7/8 to 1-3/4 headers come from a swap kit from Muscle Rods/Hedman Hedders. The bottom end was upgraded with ARP hardware, line honed with studs, while Grimes-proprietary JE Pistons smash the air/fuel mixture. An AutoRad radiator and modified AMD core support are bolted to the front of the Nova, while a Vintage Air Conditioning system and serpentine kit from Concept One are bolted to the engine Callies 6.125-inch Compstar rods. MSD Performance’s 6LS ignition control module and 8.8 plug wires handle the spark, while an Edelbrock fuel pump feeds the thirsty combo.

The Nova features a Keisler SS 700 5-speed manual transmission that really makes driving the car a blast. “We could’ve put an automatic in it, but it just wouldn’t be as fun,” Craig said when we asked about the gearbox. The Keisler box is built to be compact, handle big torque and is offered in both wide and close ratio versions. A Legend Gear & Transmission rearend with 35-spline axles and 4.11 gears is bolted to factory leafs.

All of the components were custom built just for this car; door panels, headliner, and seat pattern. The front seats are from a ‘72 Chevelle, the steering wheel came from Classic Industries, the carpet came from LMC carpet, and the shift boot was custom sewn. Craig had to stain certain parts to fully saturate the cockpit in the red color. The instrument panel came from Dakota Digital. We noticed a very period-correct looking panel on the dash controls the Vintage Air system, too. A Flaming River steering column connects the driver, while the centerpiece of the whole red office is the five-speed shifter. And that’s a ’66-67 dash, by the way.

The paint chosen was PPG’s Blue Haven for a base, and then sprayed with a Glamour clear coat. The side markers were shaved to give a cleaner look and Craig also liked the look of the 1969 tail panel and grille, so those were added. Other subtleties include clear marker lights in the bumper and Detroit Speed’s variable windshield wipers.

The wheels are from Schott’s Mod 5 Cover-loc line, which measure 18-inches at all four corners, 8-inch up from and 10-inch wide out back. The tires are Yokohama 255R40s in front and 295R35s in the rear. We really liked the lug nut cover on these wheels; makes them theft-proof and produces a cleaner look.

Hotchkis suspension adorns the underside of the AMD Nova, including the front sway bars, tubular upper and lower control arms and 3-inch drop springs. A full braking system from Wilwood makes sure the car can stop on a dime; 14-inch discs with six-piston calipers in front and four-piston calipers in the rear.