This blown LS6-powered Impala is ready to hit the road 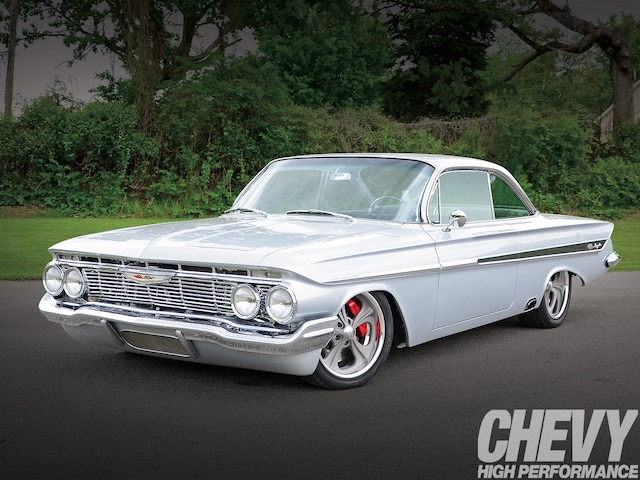 The trained eye of a car guy can easily spot the differences between a show car and a driver with a quick glance. There are a few giveaways, and the ’61 Impala SS on these pages certainly fooled us upon the first look with its incredibly low stance, outstanding attention to detail and its too-clean-to-be-driven appearance. After speaking with the owner, David Walsh and the builder, Chuck Keene, we learned that the car is a bit more practical than we gave it credit.

As it turns out, David wanted a multipurpose car that could hold its own at a car show, but also turn heads on the street. Chuck Keene, owner and operator of Georgia Hot Rods is responsible for most of the work, and went all out on this build to retain the driveability of the car, while going the extra mile on the details. David’s Impala hit the streets in September 2012, just in time to hit up a few car shows before the end of the season. From there, David displayed the car at the World of Wheels event in Chattanooga, Tennessee, but found that driving the car was much more fun than letting it sit around at a car show. Despite the desire to drive his vintage Chevy, he took home plenty of hardware from the various shows he has attended.

We can’t blame him for wanting to drive his Impala, because it has the perfect look and plenty of horsepower to back it up. Add to that a Tremec five-speed manual transmission, and you have a combination that begs to be driven. Custom touches are in abundance, but Georgia Hot Rods didn’t alter the basic design of the body since the ’61 Impala bubbletop had great lines from day one. The body and interior modifications are subtle, but opening the hood offers an obvious change in scenery compared to most Impalas from this era. Not even the mighty 409 could hold a candle to the modern powerplant inside David’s Impala.

And though Georgia Hot Rods made a huge effort on the details and finish quality, David’s Impala is ready to hit the road. Two years in the shop resulted in this immaculate Impala, which has high-tech horsepower underhood, and lots of suspension goodies underneath a classic Chevy body that never grows old.

One of the biggest challenges of building a fullsize ’58-’64 General Motors car is working around the X-frame design. It was an innovative design when it came out in the ’50s, but it certainly isn’t an ideal platform in a performance build. The X-frame design also provides challenges when it comes to exhaust routing, but you’ll notice Dave’s car sits very low without the normal ground clearance issues you’d see with a stock X-frame car. Georgia Hot Rods outfitted the chassis with a host of Global West suspension components to get the stance where Dave wanted it. Adjustable coilovers reside on all four corners, providing the desired ride height, while tubular control arms, and hefty sway bars help the car handle well. Awesome stopping power is provided by Baer six-piston calipers, which clamp down on massive drilled and slotted rotors. An aluminum Wilwood master cylinder supplies fluid through an expanse of neatly routed stainless steel brake lines.

Dave’s Impala rolls on a set of Billet Specialties Nail wheels, which measure 18x8 and 20x10. These massive hoops mount to a set of Toyo Proxes tires, sized 225/45ZR18 and 255/45ZR20 respectively. The Billet Specialties wheels feature a cast center for a very distinct look, which works well in conjunction with the bright red Baer calipers hiding behind the spokes.

Underhood is a supercharged LS6 engine from an ’04 Corvette Z06. It’s all aluminum, and it made north of 400 hp from the factory, so the Magnuson supercharger takes a potent combination and turns it into a monster. It is an intercooled system, and it undoubtedly makes some serious power. Dave estimates the LS6 to be near the 600hp mark on pump gas. The engine bay is one of the cleanest we’ve seen, with a smoothed firewall and a great deal of polished aluminum accessories and brackets. The LS6 engine is cooled by an aluminum radiator, which mounts to a custom aluminum radiator support with polished closeout panels. The polished blower adds the finishing touch to an impressive underhood display. Behind the high-tech powerplant is a Tremec five-speed manual transmission, which uses a hydraulically operated Z06 clutch. Georgia Hot Rods did away with the original two-piece driveshaft, opting for a custom one-piece unit. Out back, horsepower is turned into momentum with a 9-inch rear end, fit with Positraction and 3.50:1 gears.

You won’t find a flaw in the body on David’s Impala, and that’s because of the extensive work by Billy Rollinson. He handled the bodywork and paint on the beautiful bubbletop, and gave it a few custom touches with shaved door handles and custom side-exit exhaust outlets. After the body was straightened, aligned, and prepped, Billy applied PPG materials with a silver hue picked from the Aston Martin catalog. The Impala was then fit with its Super Sport trim, all of which is reworked and polished to an immaculate finish. The bumpers have been modified into one-piece units, and a custom opening in the lower valance panel allows fresh air to pass into the intercooler.

When David slides behind the wheel of his ’61 Impala, he rests comfortably in the ’64 Impala bucket seats while gripping the original steering wheel. Dark gray leather is wrapped tightly around the seats and interior panels, which is the handiwork of Steve Holcomb at Pro Auto Custom Interiors. The dash appears to be mostly stock, until you notice that the heater controls, ashtray, and radio opening are no longer in place. It’s a smooth look that doesn’t take away from the car’s original style. The Vintage Air heat and A/C system looks right at home, with a slick underdash panel to house the oval vents. Other modern accessories include power windows, door actuators, and truck actuator. A Hurst shifter pokes through the custom console.