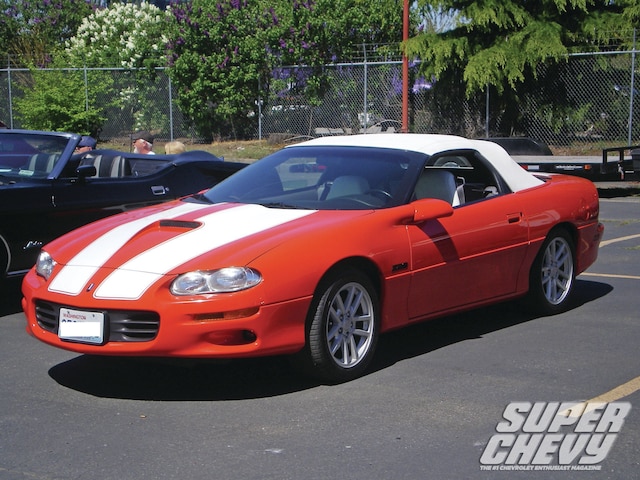 Quick Shot: The Jeffries have a solid marriage, built firmly upon their his and hers ’77 Camaros. Charlie’s owned his since 1978, and given it a mild restomod job with a 383 stroker for power. Judy’s car was purchased in 2005, and restored to factory original spec as she wanted.

Quick Shot: Kevin bought his ’69 in good shape, and turned it into a street sleeper by dropping in a 6.0L LS truck engine and 4L80E trans. Later, he added a C5 Z06 intake, Walbro fuel pump, and bigger injectors. He also installed a Vintage Air system to stay comfy during Florida summers, and completely rebuilt the suspension.

Quick Shot: Jack built his rare two-door wagon into one nice street machine. Power is from a 400 HP small-block, the trans is a classic M20 four-speed, plus there’s a Currie 9-inch rear, front disc brakes, and custom paint and interior. It took him 12 years to build, and first time out placed second in the Tri-Five class, along with a Best in Show award.

Quick Shot: Alex started with nothing but a body and frame, then slowly built up his A-body with a 450 HP LS1, 700-R4 trans, Hotchkis suspension, Moser 12-bolt rear, and Foose wheels.

Quick Shot: Andrew didn’t let the fact this car was a basket case stop him from rebuilding it. Even though the car had no windows, wires, or even tires, with his own two hands he rebuilt the Impala into a cruiser with a 350 small-block, air suspension, 20-inch polished wheels, and a lot of blood, sweat, and tears. He did everything but the paint.

Quick Shot: Being a retired US Army medic, Scott knows how to fix things up. He got the ’99 for a screaming deal, then added Hooker long-tube headers, SLP Loud Mouth exhaust, Koni shocks, Strano springs, Spohn lower control arms, a 100-horse shot of nitrous, and a tubular tunnel brace. Without nitrous, it makes about 340 HP at the wheels.