An inside look at the development of Redline Motorsports' 755rwhp, 10-second Camaro ZLR 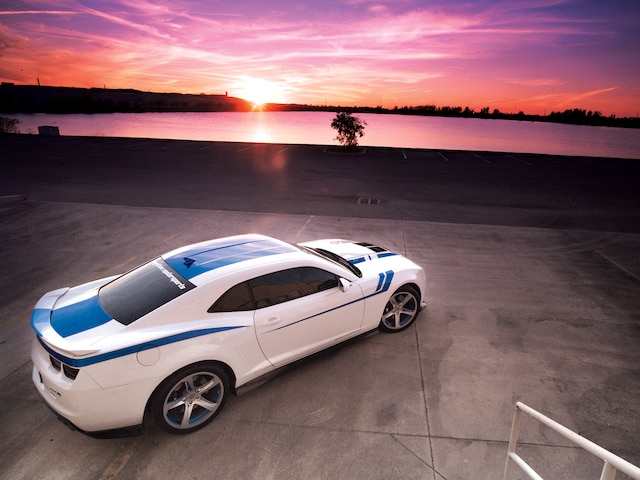 When you're a well-respected custom hot rod builder known for building highly modified late-model Corvettes and fifth-generation Camaros, you have a choice to make when Chevrolet releases a new car. In the particular case of the '12 ZL1, you could just decide that a supercharged, 6.2-liter, 580hp, magnetic ride-equipped Camaro was good enough for most people and go on your merry way building "regular" Camaros for people with a need for speed. Or, alternately, you could decide that it was about time Chevy stepped it up and the new ZL1 was simply a new base from which you could work.

In the case of Howard Tanner and his company, Redline Motorsports, the choice was simple. Take the ZL1, add over 300rwhp, develop several high-performance packages for it, run 10s, create a custom set of wheels, develop a carbon fiber aero kit, test everything, race everything, do it all in eight weeks, call it the ZLR, and eventually sell a couple more to customers interested in driving the best of the best, without compromise.

Of course, if you're going to go that route, you might as well do it as quickly as possible too, and give yourself just a couple of short months to complete the majority of the package, while simultaneously testing, building, and racing on brand new parts. Oh, and you might as well start with an extremely early production car—say number 33—and tap your friends at General Motors, and even the shipping company, to try and get you one as fast as possible. If it all comes together, as it did for Howard, you'll end up at the forefront of ZL1 development, and have packages available to customers well before many even get to see a ZL1 on the street. But you have to move fast, and you better know what you are doing. "An epic battle arose with the ZL1s arrival, and Redline wasted no time in striking," said Tanner. And an epic battle it was …

Initial development of the ZLR focused solely on making it go as fast as humanly possible without stripping the ZL1 of its character. "When it was finally determined that GM was building the ZL1 at 580 hp, it was immediately apparent there existed a need to step up the game, since the competition's GT500 was slated to have 662 hp." And if the would be competition was going to be pounding the streets of South Beach with 662, Howard and his customers were going to be rolling deep at 700 and some change. Within three days of receiving the car, the Redline crew was at Palm Beach International Raceway to baseline it, running a 12.24 at 116 mph in stock form. By day's end, the ZLR was already well into the 11s, running an 11.68 at 118mph with Redline's own ZLR cold air intake system, a set of drag radials, and a proper calibration. From there, it was back to Redline's facility for two days of intense testing and modifying, with the crew swapping out camshafts, torque converters, exhausts, and pulleys to dial up the power on the ZL1 test mule. Within days, the ZL1 was producing over 730 rwhp and running 10.30s at the track, But development didn't stop there.

Remember, this wasn't just a personal project car, it's was a prototype for Redline's ZLR packages. So, each component in the system had to be installed, tested, and validated before it could be approved for customer builds. All said and done, the ZLR cranked out 755 rwhp and 740 lb-ft of torque, with a stock LSA bottom end. The power comes from a custom Redline Motorsports hydraulic roller camshaft cut by Comp Cams, Mast Motorsports 285cc aluminum heads, custom upper and lower supercharger pulleys that produce upwards of 18 pounds of boost, a Redline fabricated cold air intake system, and American Racing 1-7/8-inch long tube headers connected to a matching 3-inch exhaust. If that doesn't sound like a lot of engine modifications, you can tip your hat to the engineering team at Chevy, as well as the engineers at Redline, who clearly designed the ZL1 (and ZLR) to make big power without too much hassle.

Of course, the entire fuel system has been overhauled to support big power, with a Fore Industries dual fuel pump system supplying the good stuff to a set of massive 85 lb/hr injectors. Substantial time and effort has been put into the supercharger intercooler reservoir system as well, which now carries substantially more water (and ice at the track) throughout the system to combat heat soak. "The goal was a cool 725 rwhp and, having had experience prior with the LSA engine, we knew the recipe."

Amazingly, both the 6L90E automatic transmission and the 3.42 ring-and-pinion-equipped OEM rear remain untouched in the ZLR, although the team did replace the factory torque converter with a Coan 2,800rpm stall unit to help the heavy Camaro get off the starting line in a hurry. The factory computer system and all of the creature comforts still remain, with Howard taking control of the engine and transmission parameters through EFI Live's ZL1 tuning package.

Now, the ZLR isn't just about speed, as impressive as the 10-second time slips may be. This is a Camaro with style and grace throughout, and every detail, including the little ones that everyone else might miss. The wheels, for example, were designed by Howard specifically for the ZLR model. Instead of going with an ever-popular three-piece off-the-shelf design, they were cast as a one-piece monoblock "because that is how the OE does it." The 20x11-inch rear wheels, matched to the 20x9 inch fronts, look fantastic with the inset blue powdercoat over the brushed silver finish.

That blue ties into the custom paintwork too, which was meticulously designed by Howard before being applied by ASAP Garage. And, although the Camaro arrived in white, it was entirely recoated in PPG Radiance White with PPG Radiance Blue highlights to give it a show-quality shine.

If you haven't yet noticed the slick custom carbon fiber work, now is probably a good time to check it out. That's all custom Redline carbon throughout. The custom front splitter ties in nicely to the side skirts, which wrap up into the rear valance to give the bottom of the Camaro a completed look. Inside, it's the same level of detail, with custom black seats stitched with–yep–blue stitching throughout. A couple of ZLR badges throughout, and the rest is as Chevy delivered it, a nod to the factory's clean design.

For a build that began months before the ZL1 was even ready to roll off the assembly line, it's clear that this isn't just another ZL1 with a set of pulleys and a tune. Howard's ZLR package is a total vehicle program that has been outfitted with interior, exterior, and underhood accessories that elevate the ZL1 to the next level. Those GT500 buyers may look cool rolling off the lot with 662 hp, but they are going to be full of excuses if they find themselves next to this bad boy at the track.

Not bad for a couple weeks worth of work, right?