A trio of outstanding Bow Ties for your viewing pleasure 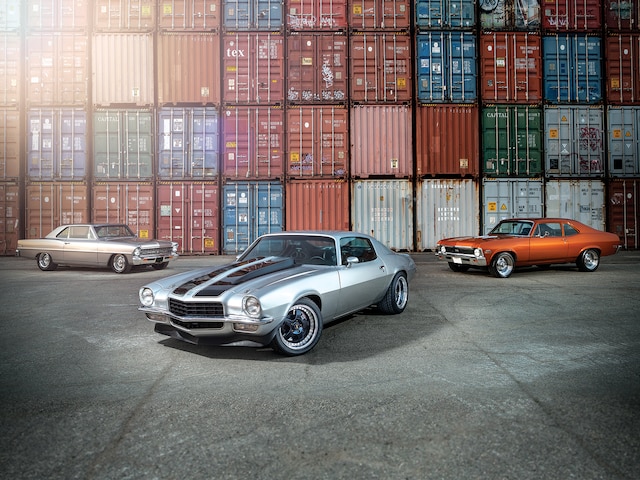 Editor's Note: We don't usually feature three cars at the same time, but that's how this was shot when a new freelance photographer sent it to us. We thought it was great as is, so we present it here for your viewing pleasure.
Photos by: Shell Geer Photography

Once he got the trunk open, he understood why. It was filled with NOS GM replacement parts—door handles, complete trim for the car, mirrors, emblems, lights, etc. As he started the rebuild, Gregory realized the parts in the trunk saved him thousands of dollars.

"The original owner had planned on restoring the car, and stockpiled a bunch of parts for the restoration," Gregory explained.

He slowly began what he called a "driving restoration," meaning he would rebuild the car while still using it as a fun toy. He started with new carpet, a headliner, and had the stock seats recovered. Then he added a 10-bolt with 3.55 gears, a Turbo 350 automatic and a complete suspension rebuild using a PST stock rebuild kit. The 350 V-8 is just as it was when he acquired the car: Unknown internals, an Edelbrock Victor Jr. intake, 750 Holley carb, MSD ignition system, and Hooker headers. Sure does nice burnouts!

The big money was spent on the exterior, which had seen its share of fender benders over the years. It took two years and $10,000 to get the body right. The color is Tangerine Mist, and it was applied by All Pro Mechanics in San Francisco. A set of Wheel Vintiques 17-inch Rally rims wrapped in BFGoodrich Comp T/As complete the look.

When asked if there was a special or unique reason to build this car, owner Eric Castillo replied, "No. Just wanted to have fun." Go argue with that! He purchased the former six-cylinder car as a $500 beater when he was 15, and learned from working on it.

With 355 ci of turbocharged small-block Chevy, you can imagine the good times are never more than an inch or so of throttle travel away. The engine assembly was done by Eric and Greg Leonard. Compression is a boost-friendly 8.5:1, with a Cammotion split-pattern, custom-ground bumpstick with 0.542/0.537-inch lift and 230/222 duration feeding the GM Fast Burn aluminum heads. A Master Power T76 turbo shoves 7 psi of boost through a 650 cfm Holley carb built by Kevin at CSU Carbs. All the plumbing was built by Eric at home. He doesn't know exactly how much power it makes, but says, "it sure is fun to drive!"

The horsepower gets to the 10-bolt rear (with 3.42 gears) via a Tremec TKO600 five-speed, aided by a McLeod clutch and pressure plate.

As for the suspension, the stock spindles and A-arms are still in service. Front springs and shocks are from Carrera, while a PST 1.25-inch bar keeps the Camaro from swaying. In the rear, springs from Hotchkis provide a 2-inch drop, and work in conjunction with KYB Gas-A-Just shocks. There's no rear sway bar. Baer brakes haul this F-body down, with 13-inch rotors up front and 11s in the back. Chris Alston Chassisworks subframe connectors were installed by the owner. All bushings are polyurethane. Simmons wheels (17x11 and 17x9.5) are wrapped in Sumitomo HTRZ tires (sized 315/35 and 275/40).

Inside, Corbeau CR-1 cloth seats keep Eric in place, and he put an '02 Camaro console between them to improve utility. Eric and his father did the bodywork, and the paint on the F-body is called Chrome Silver (a Nissan hue).

Like the owner of the Camaro, Danny Valdez bought this car when he was just 15-years-old. It was his first ride and he got it in 1999. By the time he bought the deuce, he'd already built a 377 (de-stroked 400) for something—he just didn't know what! The Nova was a perfect fit for the hot powerplant, and Danny had it in the Chevy II before he even had a license—that's a determined young man. He drove the car to high school for a few years (50 miles round trip) with 4.11 gears, then parked it for a while to freshen the engine.

A couple of different engines followed, and he got the car to run mid 11s at 118. Once he got a better paying job, it was time for more upgrades and cosmetics. The body and paint came first. Rich Martinez and Euro Design in San Francisco got the call to whip the exterior into shape. The interior is mostly original, except for the headliner.

The 377 now wears Pro Topline 230 aluminum heads with 2.08 intake valves. Compression stands at 10.25:1 and a Crower cam with 0.644/0.612 lift and 299 duration operates the valvetrain. A Holley 750 carb and Victor Jr. intake comprise the induction system, while an MSD ignition lights things off. A set of 1-3/4-inch Hooker headers carry away the spent gasses through an X-shaped crossover and Borla mufflers. The trans is a Turbo 350 with a 4,100 rpm stall converter, and backing it up is a Rear End Guys 9-inch with 4.11 gears and a Detroit Locker diff.