Charlie Kuenster Racing - The One and Only 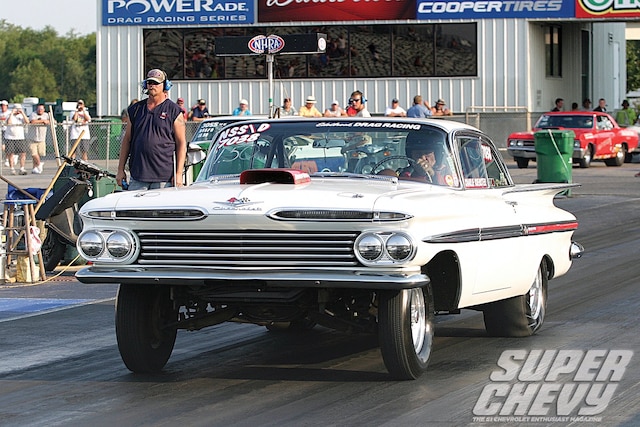 This 72-year-old midwest Chevy man has been drag racing continuously since age 21 in 1962 and in this 1959 Impala continuously since 1965. He purchased it near his home turf in Chicago for $1,450 while dating his soon-to-be-wife in 1963. In 1964, they married, and then honeymooned in it for 3,500 miles. Once back home, it was permanently retired from street duty.

In 1973, a matching ’59 El Camino costing a mere $25 was found in Minnesota. Today, it is 409-powered and campaigned by youngest son, Jerry. Oldest son Steve helps with the prep of both ’59s. The Kuensters’ very first Super Chevy Show was at Indy in 1986. Both were pictured together and written about later in the December issue. Two years ago, Jerry and the 11.60/116 mph 409 El Camino won the Cordova Dragway World Series Nostalgia Super Stock Championships.

Charlie shoes his 4,130-pound, fully-equipped Impala to 10.60 e.t.’s at 124 mph and is a tough competitor with a long list of accomplishments. For sure, this is one of the most popular, successful and low-buck Chevy family race teams you’re apt to ever see. Look for them at a Midwest Nostalgia Super Stock drag race competition.

The pimpmobile is reemerging with this 1959 Chevrolet Impala. Check out all the modifications and power that Pimpala has!