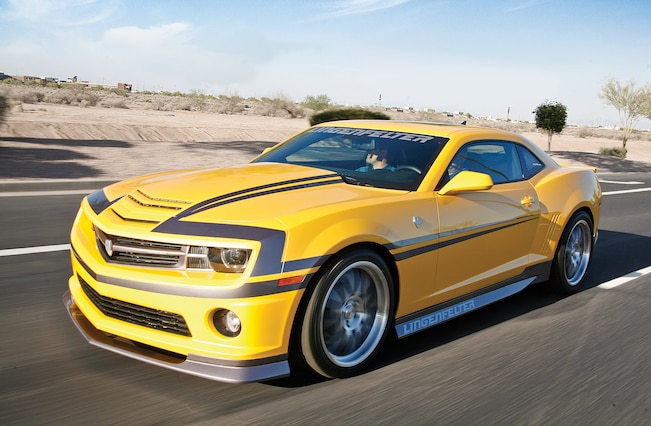 When you and I set out to build a performance car, we do so with one goal in mind. We want, for all intents and purposes, to build what we believe is the perfect car to represent our particular style. We have no one else to please, we have no customers or clients, it’s just us and our beloved Camaro. At first, we check out the car shows, we read the stories, we visit the shops, and we slowly start building up an idea of the perfect Camaro from a collection of parts that other people already make. Over time, when money allows, we put it together, buying pre-made parts from vendors and installing them as we see fit. In the end, we’ve built something unique, and something interesting, but not always something that could be considered one of a kind. We did, after all, use parts that already existed outside of our garage.

It’s interesting then to think about the life of a real prototype vehicle. The type of car that starts with nothing and comes together over months of trial and error, drawings, test fitments, replacements, good ideas, bad ideas, and plain old hard work. We’re talking about the cars that define a generation of builds, the Camaros that forged the way for us, that were literally the first ones to have a certain part or combination attached to them. These are the cars from which our projects are born but, more often than not, they end up living an unloved life, eventually left to sit in some dusty corner of a shop, forgotten about and never spoken of again.

But that’s not always the case – enter the Lingenfelter Performance Engineering (LPE) L28 project. At first glance, this wild creation may seem like an extraordinary Camaro with a couple of fancy body parts and some awesome paint, although the real story goes much deeper than that. In reality, this is a prototype in every sense of the word, a Camaro that has undergone several transformations, from a styled up rendering that appeared on the internet just as the first ’10 Camaros were supposed to start hitting dealerships, all the way to a bright yellow beast dripping with style and performance, and almost every variation of a Camaro in between. Believe it or not, you may have already seen this very car before… first in its factory Victory Red paint scheme, then again wearing a brilliant silver finish offset by a set of orange-lipped Forgeline wheels. If you’d seen that version, you would immediately know what car we’re dealing with here. And if you can’t place the chassis, you may be familiar with one of the many engine packages that this Camaro has helped develop, including Lingenfelter’s supercharged 750hp 427 cubic-inch engine, which powered this Camaro during its initial SEMA debut.

Today, that 750hp engine is long gone, with development moving from bolt-on superchargers to fully custom twin turbo kits. This is an LPE car after all, you know it has to make big power, and it certainly does manage to create enough steam to keep things interesting. Under the hood, we’re talking about 427 cubic-inches of LS7-based glory, with JE Pistons taking up the room in the bores where the factory slugs once sat. At a pump gas friendly 8.8:1 compression, LPE clearly assembled this motor with boost in mind, but more importantly they set it up to be reliable for the end consumer. See, unlike a personal project, these engines have to be proven solid, so that enthusiasts like you and I can buy them for our own projects and drive away worry free. And by worry free, we’re talking about a 3-year, 36,000-mile warranty on an 800hp twin turbo engine! To that end, the rest of the engine remains fairly “tame” by traditional standards, with a factory LS7 camshaft taking care of the valvetrain and a set of LPE CNC-ported LS7 cylinder heads wearing Inconel exhaust valves sitting in the combustion chambers. And while the engine may not sound like much on paper, it’s the additional airflow provided by two Garrett GT3071R turbochargers that take this engine package to the next level.

Built in-house by the technicians and engineers at LPE, the twin turbo system is truly a work of art. Two stainless steel, custom 4-into-1 exhaust manifolds flow from the ported LS7 heads into the ball bearing, water-cooled Garrett turbochargers, which are self regulated thanks to a pair of internal wastegates, which eventually expel unused exhaust back into a 2.5-inch Corsa exhaust system. With street driving and long-term performance in mind, the LPE crew wisely chose to install an air-to-air intercooler system on the twin turbo mill, which cools the incoming air charge before forcing it through a GM LS2 throttle body and ported LS7 intake manifold.

Regarding the rest of the drivetrain, it’s all pretty simple, with an LS9 clutch running behind an LPE 6-bolt LS9 flywheel, which turns a factory stock TR6060 transmission. With a gear selected and the loud pedal on the floor, power flows through a stock two-piece driveshaft to a factory supplied SS rear, although the LPE crew upgraded it with a set of AAM 3.70 gears and a set of Drive Shaft Shop axles. And, even though this car isn’t a racer (LPE has several dedicated fifth-gen Camaros for that purpose), the L28 wears almost everything from the Pedders Suspension catalog, including coilover dampers front and rear, along with Pedders sway bars for maximum grip. Back to the R&D side, the L28 sports a set of adjustable rear trailing arms and forward tie rods, both pieces LPE developed to improve performance on any fifth-gen, including the one in your driveway.

And while performance has always been the main focus of the Lingenfelter Performance Engineering group – it’s in the name after all – style has never been very far behind. For the fifth-gen L28 project, it was critical to the team at LPE that they develop a package that looked as good as the Camaro would perform, and in this particular case, that meant building an entire body package from scratch, even if it took months to accomplish. After extensive research, Lingenfelter began to assemble a team of body specialists, including clay modelers, designers, artists, and manufacturers who could all work together to build the package that LPE was after. What you see before you is the culmination of that hard work, a body package that includes a custom hood, a trick front grill, an aggressive front chin spoiler, rocker panel set, rear valance, and rear deck spoiler, all tied together by a central look and feel. Dubbed the Lingenfelter Signature Series, all of these pieces work together to create a bold, strong style without taking anything from the Camaro’s already strong lines.

Up front, the styling starts down low, with the front bumper hugging tight to the pavement thanks to the aggressive Signature Series front chin spoiler, which really sets the tone for the entire vehicle. Just up from the bumper is the LPE front grill, which replaces the factory unit with an elegant single horizontal split over a dark mesh back. That grill may be subtle from a distance, but there is no missing the hood, which rises up from the factory “mail slot” in the front bumper with two additional slots engineered to scare small children, suck in careless birds, and, most importantly, bring fresh cold air into the engine bay. Out back, the styling remains the same, with a high-rise rear deck spoiler guiding the eye upwards, which works perfectly with the lower valance to let would be challengers know who the big dog is. Of course, anyone who is anyone in the tuning game should already know the big dog when they see it, and the L28 has inspired enough of the market with its good looks, custom body work, and killer twin-turbo engine package to earn its spot on the top of the list. It may not be the fastest LPE car in the stable, but this is one R&D mule that’s going to be difficult, if not impossible, to forget about any time soon.