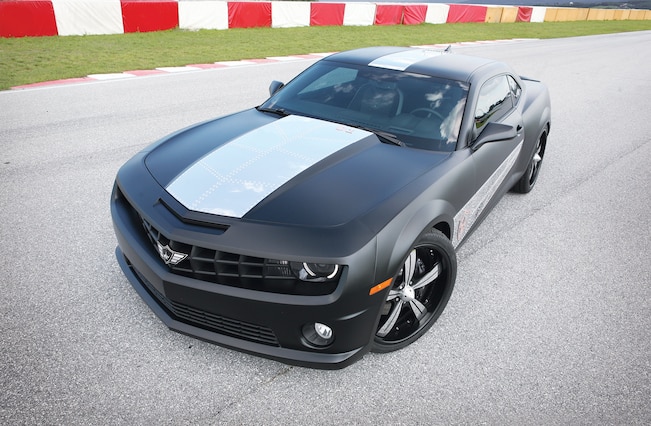 Reality TV may have brought us to new lows when it comes to the glamorization and idolization of people with less than admirable qualities, however, it also reinvented the blue collar hero – brash, rough-around-the-edges artists with a welder and English wheel. An arsenal of expletives and power tools propelled these masters of their craft to overnight rock stars with the wingspan of cable television. But of course this sort of fame can put your flaws under a microscope and put strained relationships into a hot furnace. Just like in metalworking, heat can sometimes have an upside in our personal and professional lives. Out of that hot furnace came the molten metal that eventually formed Paul Jr. Designs. The co-founder of Orange County Choppers, Paul Teutul Jr., has extended his creative talent to virtually anything and everything that inspires him with Paul Jr. Designs (PJD). And his latest venture with Trans American Muscle could be his most ambitious yet.

With help from Trans American Muscle, PJD has designed a special edition Camaro based off the (winning) 2011 Build-Off Bike – in which Paul Jr. went head to head with his father and Jesse James, a legendary battle indeed. The bike and subsequent Camaro are inspired by, and pay homage to, various World War II airplane designs such as the P-51 Mustang fighter plane. Wing-like aluminum sheet-metal and 1661 rivets give a vintage aerospace feel to the hood, roof, deck lid, and side trim. The sheet-metal has a hand-crafted look via the asymmetrical design, which is capped off by the copper PJD crown on the grill and fender (also found on the gas tank of the bike). Meanwhile high-dollar Spies Hecker two-stage black paint and matte clearcoat provide the sinister backdrop for the metal work. Each of the 77 cars will be numbered in bronze, such as Paul Jr.’s personal #01, and 50-state legal. The riveted theme is also carried to the interior with a PJD doorsill plate and two-tone Katzkin interior with PJD embroidery.

As for performance modifications, this is where Trans American Muscle stepped in to provide OEM reliability and driveability while providing a substantial boost befitting such a fierce looking machine. To substantially enhance the horsepower and torque, a 2.9-liter Whipple twin-screw supercharger was placed atop the stock LS3. Whipple’s 50-state legal kit utilizes a front-entry with a 112mm inlet that trumps typical positive displacement blowers, a 3x5 rotor combo for better airflow under the curve, self-contained oiling system, and a massive bar-plate air-to-water intercooler. With only an SLP X-pipe and exhaust system the Camaro puts out 580-rear wheel horsepower and 450 lb-ft of torque.

Though it would seem to need no further help, grabbing gears is made even more enjoyable with a Hurst shifter to negotiate the stock TR6060–the pistol grip providing some necessary attitude to the 2SS interior treatment. Form and function also meet with a set of Forgiato Ritorno 22-inch wheels, meant to recall the propeller wheels of the bike, using a custom center cap. When paired with Pirelli P Zero tires and KW coilovers the Camaro has the stance of a fighter jet capable of some serious g-Forces. Meanwhile the optimized spring rates and dampening, as well as the increased rigidity that SLP subframe connectors afford, prove that this Camaro can also walk the walk.

Despite Trans American Muscle’s success with the Bandit, a 2012 Camaro modeled after the 1978-79 Trans Am, the formula for the Paul Jr. Designs Camaro is decidedly unique from the Whipple-blown LS3 to the P-51 inspired riveted sheet-metal thanks to the collaboration of both TAM and PJD. In some ways it is a more simple approach, one that would retain the soul of the Camaro while setting it apart from every other on the road (and every other special edition). But, strangely enough, producing the car wasn’t Trans American Muscle’s idea (as you’d think). TAM actually approached Paul Jr. about building a bike, and Paul suggested building a Camaro instead. Given that the Paul Jr. Designs mission statement is to apply the same creative design approach across many different media, not just motorcycles, it should come as no surprise that this would be the next step for one of America’s newest blue collar heroes.

Unlike the many famous one-off custom motorcycles we’ve seen Paul Jr. and OCC build over the years, courtesy of the Discovery channel, the PJD Camaro is a tangible piece of automotive machinery (dare I say history?) that can be had by 77 lucky people. And best of all; it’s no showpiece to just take up space in the garage and brag about on the internet – this is a drive-anywhere and still go low 12s on street tires while looking awesome type of ride. And yeah, you can still take it to the local car show and win some awards while reminding people what real American iron looks like.