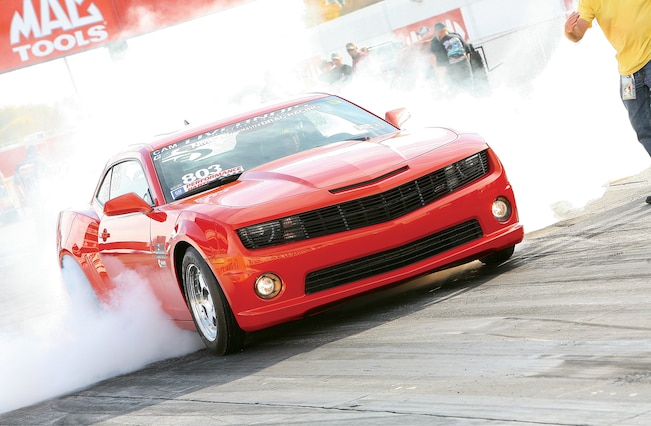 In its second year, the LSX Challenge Series continues to be the premiere location for drag racing in the Gen III/IV community. Born out of the once-a-year blowout, the LSX Shootout, the National Muscle Car Association worked with Chevrolet Performance Parts (GM Performance Parts at the time) to develop it into a points series. The series features five different racing classes (among them is a fifth-gen specific class) and a car show; kicking off in Bradenton, Florida and concluding in Indianapolis, Indiana. The following is a list of fifth-gens that have been tearing up the series in several different classes.

Speaking of great off the tree, Shawn Calabrese was the winner of the 2011 season 5th Gen Challenge for a very good reason. While Shawn runs the car in the 5th Gen Challenge, his father Tom, a hot-shoe himself, runs the ’10 SS in True Street. Both have been running in the LSX events since 2007, while Shawn was in college. These diehard LSX racers embody the spirit of good sportsmanship and competition, and seem to get better with every race they attend. The current combination includes a Livernois Motorsports cam and ported heads, Kooks headers, Corsa exhaust, and an Airaid intake for power. However, a Precision converter, 17-inch Bogart wheels (stock Brembo brakes), and Mickey Thompson ET Streets are what have helped propel them to an 11.68 at 118mph.
2/13
3/13

Arkansas native Ronnie Hackelton won the 2011 GM High-Tech Performance Fastest Fifth-Gen Shootout in Indianapolis, IN and is easily one of the best off the tree. Ronnie is a perennial contender in the 5th Gen class, in part thanks to Shahan Race Cars. Last season Shahan built a Magnacharged 416 LS3 street set-up, which had him running 10.30s thanks to a Driveshaft Shop 9-inch conversion and Turbo 400 transmission, which enabled a hard launch. This year Shahan made a few changes to the 9-inch, switching to a 33-spline Wavetrac diff, removed some weight, and retrofitted Wilwood brakes to fit a 15-inch drag wheel. The street-friendly LS3 was also traded for a stroked LS9 with a Whipple supercharger that should crank out 19-20psi of boost. With help from a Neil Chance converter, builder Bobby Shahan says a 9.50 or better is certainly in the cards.
4/13
5/13

The youngest person to make this list is 20-year old Louie Fillippides, from American Racing Headers and Farks Supercars in New York. This up and comer wasn’t messing around when he put together this solid roller 416cid LS3 with a forged rotating assembly, ported stock heads and a cog-driven ProCharger F-1R. FAST XFI engine management controls the boosted bullet with help from Matt Hauffe at Tune Time Performance. An impressive 1.40 short-time is owed to a Turbo 400 transmission from RPM and a Hendrix Engineering 9-inch with 4.11 gears. Louie’s Red Jewel Metallic SS rides on 17-inch Weld front wheels to clear the stock Brembos, however, V-6 rear brakes give room for 16-inch CCW rear wheels and Hoosier Quick Time Pro slicks. In addition to putting the car together, Farks also did all of the chassis work (including the cage and suspension). So far it has run a best of 9.42 at 152mph, which was enough to win the 5th Gen Challenge in Indianapolis last fall. But at only 14psi, clearly this combo has more left in it.
6/13
7/13

It should come as no surprise that RPM and owner Rodney Massengale were one of the first to put a 4L60E into a fifth-gen and have great success. The company has built its reputation on late model GM transmissions, and Rodney is known for his love of the electronic 4-speed. This is not to say that they didn’t consider or even try putting in a 4L80E. Swapping to the Level 7 4L60E shaved several tenths off his e.t., coming in at a best of 9.61 on nitrous and 10.48 on motor. A Driveshaft Shop 9-inch with 3.70 gears, Coan 3600-stall converter and Pfadt suspension are key to those 1.46 sixty-foots. RPM’s trick C5 rear brake conversion allowed Weld 15-inch wheels and a meaty M&H 275/60/15 drag radial with 17-inch wheels and skinnies over the stock front brakes. The engine is a surprisingly stock LS7 with ARP rod bolts, Mahle forged pistons, and a Comp Cams hydraulic roller. A Wilson Billet Bank intake manifold and Nitrous Pro Flo fogger comprise the induction, and American Racing 2-inch headers and 3-inch pipes provide the exhaust path. Having just finished sorting out the car at the Indianapolis race, Rodney will be looking to make a full season this year and he will be tough to beat in the 5th Gen class.
8/13

Cincy Speed put together Jason Parker’s Inferno Orange demon. The ’10 Camaro is on its third engine build with the goal of becoming the fastest fifth-gen. In its last incarnation the beast was sporting a BES-built LSX 427 with Mast LS3 heads, ProCharger F1R supercharger, G-Force 9-inch, and an RPM Level 6 4L80E transmission. With full accessories and luxuries like A/C and power steering, Jason managed a 10.30 at 134mph. The latest setup also has Holley Dominator EFI, a larger ProCharger F2 blower, and a Nitrous Outlet kit for good measure. While this setup will be less street friendly, especially with the new Coan 4200-stall converter, he should be able to best the current 1.57 short-times on Hoosier slicks and blast into the 8-second range. Expect to see this new combo rang out by the time Jason hits his home track in Bowling Green, Kentucky.
9/13
10/13

At the time of publication, LPE’s ’10 shop car was easily the fastest LSX-powered fifth-gen around. In LSX Real Street legal trim, the Camaro ran an 8.71 during testing. Power and traction management were an issue all last season while working the bugs out of the brand-new 358cid motor (built in-house) that utilizes an LSX block, custom flat-plane crank, solid roller cam, LSX DR heads, 76mm turbo, and Big Stuff 3 engine management. LPE’s crew of talented fabricators swapped the IRS for a solid axle with a fourth-gen style rear suspension. Though it is a full-on, gutted race car, the attention to detail on the chassis is remarkable. For the 2012 season, the black and white graphics, which were the reverse pattern to their record-setting LS9 Camaro, have been traded for a retro red and gold logo to mimic John Lingenfelter’s ’69 Camaro–commemorating his US Nationals win 40 years ago as well as to pay tribute to the 10th anniversary of his accident. Look for this car to be a serious contender in Real Street, and the fastest fifth-gen on a 275 drag radial.
11/13
12/13
13/13