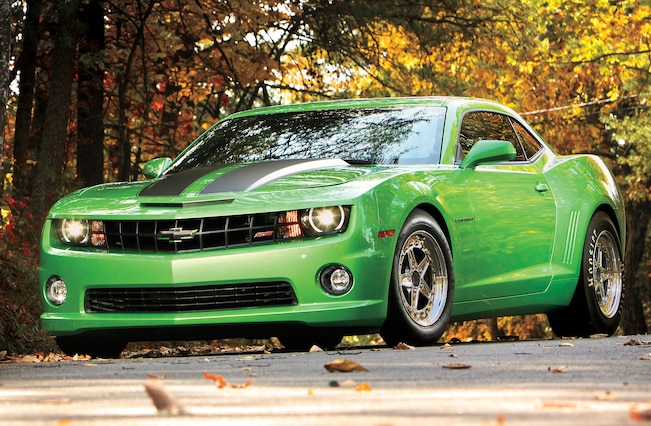 “I found myself eyeballing a friend’s new 2011 Camaro one day and impulsively decided to buy one just for a weekend cruiser, telling myself that I wouldn’t sink a ton of money into it as I had most previous cars I owned. We all know how that goes…” Yes, we do all know how that goes, don’t we? “I took it to the track ‘just for fun’ and it ran a couple of 13.2s bone stock with an M6 and stock tires, so not bad, but just fast enough to get a little itch going to see if I could hit 12’s and thus it began…” If this were an AA meeting, Bill Mallett would probably be sitting back down right now, while you or I reluctantly started telling our story of Camaro addiction gone too far. Luckily, there’s nothing wrong with a little horsepower here and there and Bill’s addiction to his Synergy Green 2011 is more inspiring than anything else.

Of course, like most addicts, Bill Mallett didn’t end up here alone. To start, Bill has a history of dealing in the fast stuff, with a long list of various muscle cars that he had turned into hotrods during his early 20s. On top of that, Bill has fast friends and an internet connection, which eventually led him to Camaro5.com and on to Vengeance Racing’s website. There, Bill found one of the best “enablers” of horsepower on the planet, a man named Ron Mowen, owner of Vengeance Racing, whom would eventually end up reverting Bill back into a Camaro addict, although neither of them planned it to happen like this. Like any good dealer – um, friend – Ron was happy to help Bill with his build, who started this journey with just a stock Camaro and a set of long-tube headers. “Bill called up Vengeance Racing and he was looking for a little more power. Kevin Echols helped him out and before we knew it, we had a Whipple 2.9-liter supercharger system en route.” From there, it started to spiral, slowly at first and then faster and faster each time the new crew got together on the phone. “If we’re going to be in there…” got thrown around and all of a sudden, Vengeance Racing was on the horn again, ordering up a custom ground Stage II blower camshaft for Bill’s project, which Ron had cut with 227/235 degrees of duration, .614/.621-inches of lift and a 115+3 lobe separation angle.

With the big parts in the mail, it was time to get to work on the Synergy Green beast and the Vengeance team dropped the one and only Charlie Hill on the job, who started out by tearing through the engine bay, rapidly removing each and every stock piece that would no longer be necessary on Bill’s ride. It didn’t take long to get down to business, with the stock LS3 being torn down to almost nothing to make room for the new camshaft, along with a host of supporting modifications, including a Katech C5R timing chain, Melling Hi Volume oil pump and a set of hardened 7.400-inch Comp Cams pushrods. Up top, the crew chose to leave the stock LS3 cylinder heads in place, although the rocker arms were upgraded with a set of Comp Cams’ trunions and the stock LS3 valve springs replaced by a set of Total Engine Airflow dual gold springs and titanium retainers. And, while the stock LS3 intake manifold is a nice piece, it doesn’t exactly work as well as a 2.9-liter positive displacement supercharger, so it too was ditched in favor of the new Whipple system, which shipped complete with a slick carbon fiber jack shaft cover and matching carbon inlet tube. Nothing wrong with a little show if you’re going to have this much go…

With the engine almost wrapped up, Charlie turned his attention to the rest of Bill’s drivetrain, understanding that horsepower isn’t the only story when it comes to making quick drag strip passes. Behind the engine, Bill chose to install a trick RPS Street Twin Carbon clutch kit that was guaranteed to hold up to tough drag strip launches while maintaining civil street manners. Remember, Bill wanted “a car you can drive out to dinner with your wife and hit the track and kick ass and take names all in the same weekend” and he wasn’t going to take anything less from the build. Backing that killer clutch, Bill turned to Hendrix Engineering, this time relying on Thomas Hendrix’s expertise to spec out a 9-inch rear end conversion that would replace the notoriously weak stock fifth-gen differential. Utilizing a Strange Engineering 9-inch third member and a 3.89:1 ring and pinion, the Hendrix conversion system is dead tough and strong, which is exactly what Bill needed to take to the track and leave the line in a hurry.

With the addition of a set of upgraded axles and a one piece driveshaft, the majority of the drivetrain and engine work was complete and Bill had the Vengeance crew turn their attention to the suspension, where they went all out and ordered practically every bolt-on piece that Pfadt Race Engineering makes for the new Camaro. By everything, we’re talking about Pfadt lowering springs, performance sway bars (front and rear), rear tie rods with upgraded bushings, rear trailing arms, polyurethane differential bushings and even a set of solid billet subframe bushings to tie everything tightly to the chassis. Even with all of this work, Bill reports that the Camaro “runs like a stock car, but hauls ass like a race car,” which is exactly what he was after.

Now, we know you’re wondering what all of this effort amounted to on the rollers and the results definitely do not disappoint. How does 670-rear-wheel horsepower and 607 lb-ft of torque sound? Remember, that’s on a set of stock pistons and rods (crank too), stock compression, stock cylinder heads and an out-of-the-box supercharger system with a couple of well appointed supporting modifications. The Whipple makes big brute torque, too, with 550 lb-ft of the stump-pulling stuff available from just 2600rpm! But of course, dyno numbers don’t always tell the entire story, so Bill’s next excellent adventure (sorry, had to do it) was down at the local drag strip, where he (with Ron Mowen in tow) spent time trying to dial in the perfect e.t. Using a pair of 28-inch Hoosier slicks, Bill’s Camaro was able to hook up and go, cutting a 1.51-second 60-foot time on the way to a 10.56-second run at 135 miles an hour, which is incredible in a full weight fifth-gen with a stock short-block and a 6-speed manual transmission. “Wow what a strong little setup this was! Best e.t. with slicks and 11.5lbs of boost was 10.56 at about 135mph. Fast and fun but I am a very competitive person and being one of the fast Camaros wasn’t going to cut it…”

Back to his dealer – we mean shop – Bill went, where the maniacs at Vengeance Racing were already plotting the next phase of this Synergy Green rocket. What they’ve schemed up is intense, with plans for a 434 cubic-inch engine based on the wicked RHS LS engine block paired with a much larger ProCharger F2 centrifugal supercharger system. The TR6060 manual transmission and carbon clutch are also on the cutting room floor, with a stout 4L80E automatic transmission taking control of the shifting duties. “We are hoping to break into the 8-second club and be the fastest Camaro in the country, at least for a short time. I should qualify that, by fastest I mean fastest street car…” We know what you meant Mr. Mallett, now it’s time to go out and take it. Oh, and welcome back to the addiction program, we don’t give out chips, only time slips, and the closer you get to zero days without a relapse the better!