This edgy Camaro pushed the styling envelope – and pulled in “Best GM Vehicle” at SEMA. 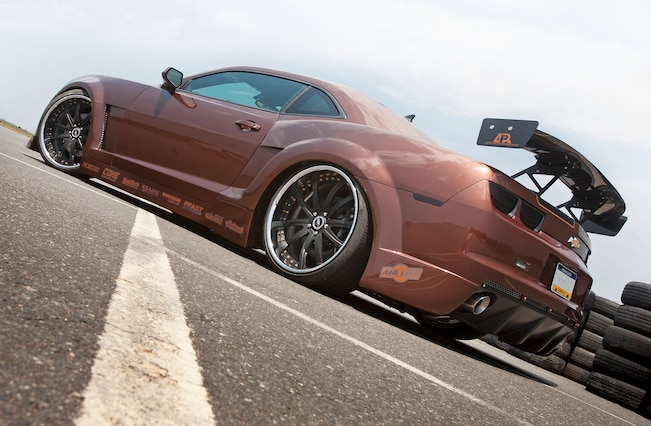 Many of the new Camaros that you and I run across seem very familiar. That doesn’t just mean that they’re all fifth-gens. It means that they sport similar modifications – engine packages, suspension kits, wheel and tire combos, and the like. The company names, products, and performance results are well known within our fanatical niche. That said, Peter Colello’s 2010 Camaro is a bit of a mystery. It’s boy-racer body kit and carbon fiber rear wing scream “import.” Those rims would look at home on an SUV; the brown colors would rock on a 1970s panel van. And there’s the potentially explosive matter of a bone-stock, 11.3 to 1-compression V-6 in the engine bay ¬– and two types of forced induction abusing it. As 2010-up Camaros go, this one’s a bit of a riddle. However, just because you’d need an eye for imports to identify most of its mods, doesn’t mean that this Camaro isn’t eye catching – we thought enough of it to photograph it recently, and General Motors recently honored it with a huge award.

But before we get too far ahead of ourselves, here’s a little background: Peter Colello owns Mummbles Marketing in Harrisburg, PA, which has done OEM SEMA builds for GM, Hyundai, and Scion. Colello is an import lover, but he became interested in Camaros when the 2010 model came out. Peter’s import and muscle car worlds were combined when GM’s 2010 Dollar Car Program for SEMA was announced. Peter had an idea to create a unique-looking Camaro for the SEMA show, powered by a custom twin-turbo V-6 that would outshine a factory V-8. With Peter providing his sketches, Jason Bliss began the renderings. It took 15 iterations before Colello was satisfied; he sent the proposal and waited. While his contact at GM wasn’t sure the General would go for the brown paint, “the Mummbles Marketing team fell in love with the color in the rendering, and was confident that GM would too,” he says. As it turns out, Colello was right: out of only a handful of companies who were awarded a dollar car, Mummbles was one of them.

In August 2010, a new Camaro V-6 was purchased locally for one dollar. With SEMA only 10 weeks away, the team immediately began ordering parts, tearing the car down, and coordinating with shops that would be assisting them with the project. As time was of the essence, they decided on adding both turbocharging and nitrous to the Camaro’s direct-inject, 3.6-liter V-6 – electing to leave the 217-cube mill dead stock internally.

RT Tuning custom fabricated a twin turbo system around two SPA Turbo 6000 series turbos with A/R .60 compressor housings. A custom RT Tuning pan provides the engine and its turbos with oil. Compressed air passes through 3-inch piping to an S-Max intercooler mounted behind the front bumper. Once cooled down, the air is piped into the throttle body. On the hot side, turbo-bound exhaust is brought up from custom headers, pushed out into 2-inch individual pipes that join into a single 3-inch downpipe, and exits through Magnaflow’s 2.5-inch exhaust system. An S-Max blow-off valve keeps the turbos’ compressors surge-free, while dual S-Max 40mm wastegates keep boost firmly set at 8psi.

To squeeze every last drop of power from the engine, Colello’s crew added a single-nozzle wet system from Nitrous Express for an additional 105 on-demand horses. To keep the engine from tearing itself apart while feasting on this boost-and-juice cocktail, GM tuning specialist Trifecta re-flashed the ECM for powerful and safe performance. That’s a lot of power to be putting through GM’s Aisin six-speed stick; nevertheless, the trans, clutch, and flywheel are dead-nuts stock, as are the driveshaft and rear diff; an MGW short-throw shifter makes gear changes smooth.

Expecting a stock suspension to handle this kind of power can put you on a first-name basis with AAA (and possibly AA as well), so Colello’s team turned to Air Lift Company and PFADT. Air Lift’s Digital Air Management System allows for 9 levels of adjustment from the front air struts and the rear air springs (which sport QA1 dampers). Though the lower and upper control arms are stock, PFADT rear trailing arms and bushings and front and rear Sport sway bars with adjustable end links were installed. A Tuned Parts Exhaust tunnel brace was added, as well.

Assisting the now-crisp handling is a fat set of Pirelli P Zero tires – 265/25/22 in front, 305/25/22 in the rear. They’re mounted on 10.5-inch front and 12-inch rear TIS Modular Wheels, which feature black faces, chrome lips, and tan bolts. Clearly visible through those spokes are slotted and drilled Wilwood 6-piston brakes; 15-inch rotors get the squeeze up front, and 14 inchers put in work out back.

Speaking of putting in work, you may have noticed that this machine’s exterior bears little resemblance to the stock-bodied, Imperial Blue Metallic Camaro it started out as. That’s thanks to a host of Extreme Dimensions parts, starting with its 8-piece widebody kit that widens the front by 2 inches on either side and widens the rear by 3 inches, and a carbon fiber hood, roof, and trunk. APR Performance added a carbon fiber front wind splitter and a carbon fiber wing. RaceMesh kicked in the grilles and carbon fiber taillight bezels and taillight covers. And LightWurkz headlights brighten up that sinister front end. Legacy Innovations sprayed the wide body with a custom BASF Tri-Coat of Chocolate Brown with Tan accents; that mirror finish comes from 8 coats of wet-sanded clearcoat.

If you’ve never built a project on the clock, that’s a hell of a lot of work for 10 weeks. After thrashing around the clock, the finished Camaro was shipped to Las Vegas for the SEMA show. The Mummbles Marketing team was encouraged that their project’s unique design made it stand out from the crowd of 1,000-plus Camaros at SEMA. But they were thrilled when GM invited them to the General Motors Awards Breakfast, where their Camaro won Best GM Vehicle of the 2010 SEMA show. “When we won it was unbelievable,” Peter says. “It felt like a dream; honestly, it took a few days to really sink in, all of the hard work and dedication paid off.”

And the work continues; Colello has been dialing in the dyno tune to improve on the factory rating of 304 horsepower, in anticipation for lots of street fun. “We’ve seen 375 horses so far with minor issues, and are shooting for 400-plus at the wheels. And then we’ll go from winning awards to pushing it to extremes on the street.” This Camaro may not look the part of a standard 5th Gen performer…but that last part sounded awful familiar, didn’t it?