There’s More Than One Way to Skin an Elco. 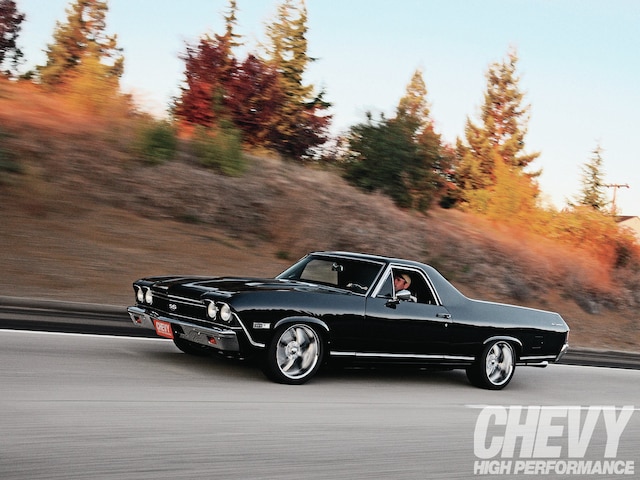 Dustin Burch is a doer. His father and his brother are doers. He and his close family (San Jose, California), with a little help from local talent, built his ’68 El Camino in the confines and privacy of their own home. Thus, they pretty much had control over the entire project and never had to cow to the paint jailer or anyone who saw it as a potential hostage.

So far, the process has consumed four years and a lot of green, but anyone who has ever embarked on this journey knows that numbers are arbitrary at best. Sweat and angst are the real measures of the task. Impetus for the build hooked directly back to Dustin’s high school days. He had a ’68 Elco, followed by a curious succession of flat-fender Jeeps (no less than seven of them ranging from ’48-59). Even now, at a young 35, Dustin has been able to immerse himself in pre-catalyst cars much in the same way his father had when he was a youth.

As a matter of fact, it was his dad, Steve, who joked that the Elco should be bagged. But Dustin took him seriously and that’s when the whole deal began to expand exponentially and get firmly out of control. One change led to another more ambitious lead. “As I started stripping the car down for the running gear swap, my brother, Dennis, came over and said ‘Why don’t you just take the rest of the body off the frame, it’s only a few more bolts?’ So I did.”

It quickly twisted into a sort of mini bloodlust; once enacted it was impossible to quit. To wit: “Then my brother said, ‘Let’s clean up that frame’ as he started cutting off all the brake and fuel lines,” Dustin says. About then, Steve had suggested the airbag routine. Dustin: “Since I had the frame stripped down, I might as well blast it and have it powdercoated. My buddy Jason talked me into also having the body blasted and sealed at SRS Industry. When I got the body back, I noticed damage on the driver-side quarter-panel and changed it out with a new one.”

He went to Goodguys with his buddy Sam to find more body replacements. Sam talked him into taking a tailgate, fenders, inner fenders, header panel, grille, bumper filler, bumpers, brackets, and a battery tray from Matt’s Classic Bowties (Dublin, California). From this point on, Dustin realized that he was a captive, so far into the car that there would be no turning back. He built a rotisserie, bolted the body on, and trucked it over to Steve’s garage where he, his brother, and father began to suss out the bodywork. Three months later, and “with some very sore arms”, Dennis was ready to begin painting.

When Dustin got on this pony, he was looking at a paintjob and a patch for the radiator so he could just get in and drive . . . and look good doing it. He’s a very long way from that humble starting block. He’s right where you are or where you want to be. He can look around him, see his family, and know that they will always be part of his car, too, and feel very lucky indeed.

Doers Dustin and Dennis whipped up a 383 with an Eagle forged rotating assembly and TRW 10.5:1 pistons. They added TRW ring packs, did the machine work, and balanced the package. They became poster boys for Edelbrock engine equipment. They chose a Performer RPM camshaft (308/318 degrees duration, 0.488/0.510-inch lift) and made the crankshaft connection with Edelbrock double-roller timing gear. Other than the TRW high-volume pump, the oiling system remains at the original 5-quart capacity. Performer RPM aluminum cylinder heads offer 2.02/1.60 valves, 64cc combustion chambers, and Edelbrock springs and hardware. Edelbrock chrome-moly pushrods bump 1.5:1 Crane roller rocker arms. Dustin and Dennis crowned the air pump with an RPM Air-Gap manifold, 750-cfm Edelbrock electric-choke carburetor, and Spectre Dual Ram air intake. They augmented the HEI ignition with an MSD pickup and coil and set initial timing at 18 degrees. Flowtech ceramic-coated mid-length headers extract the waste. Since Dustin operates his El Camino on public roads, he demanded the advantage of an overdriven top gear. Bowtie Overdrives brought peace of mind with its 700-R4 and a 2,400-stall speed converter. Dustin adapted the factory shifter and retained the original console. Driveline Service in San Jose made him a custom prop shaft to connect with the freshened 12-bolt fitted with 3.73s and an Eaton Positraction differential.

Aside from installing the new driver-side quarter, front fenders and header panel, the tailgate, and the SS hood, Dustin and Dennis converted the access panel in the bed to a hinged, motorized door to hide the considerable airbag equipment. They molded the tailgate smooth, as well as the antenna recess on the passenger side fender. Before application of paint, Dustin put up the undercoating and Dennis sprayed the field in “hot rod black.” Father and sons did the final bodywork at dad’s house. Dennis squeezed on the PPG ’98 Saturn Purple Metallic two-stage enamel. Then it was time to chill with a round of chilly birch brew.

This place retains a strong original flavor of vinyl and leather as supplied by Original Parts Group and applied by ABC Auto Upholstery in San Jose, California. Prior, Dustin swathed all surfaces with Thermo-Tec sound deadener. He installed the new Painless wiring and contemplated the systems it would serve. The upscale audio system collects a Kenwood KVT-516 single-DIN motorized screen, DVD player, GPS, Bluetooth, MP3 player, USB port, iPod hookup, Kicker dash speaker (2x7-inch cone dual tweeters), Kicker 6-inch midrange speaks in the kick panels, and Pyle Driver 10-inch subwoofers in the box powered by a Pyle 1,400-watt, two-channel amplifier. Dustin made a custom speaker box (holding the amp and speakers) that blends into the back panel as if factory-installed. He also created a hidden access to the bed area. He used part of the center console as a cubby to secrete the keypad controls for the custom airbag system. As the Vintage Air prevails, Dustin keeps hands on the Billet Specialties Stiletto Profile steering wheel and eyes on the Auto Meter gauges in the Covan dash.

First off, Dustin had the frame and all of its components powdercoated. All fasteners are stainless steel. Dustin went to Air Bag It for their comprehensive Chassis Tech plug-and-play combo. To begin the process, he installed CPP 2-inch drop spindles. The spring pockets in the upper and lower control arms and at the rear axle and frame were fitted with coil-spring pocket eliminators that avail the Firestone airbags a flat mounting surface. He used KYB shock absorbers all around and relocated the lower attachment points of the front ones to fit. As mentioned previously, all the Chassis Tech functional equipment has been secreted in the floor under the Elco’s bed. Untoward body movement is checked by Hotchkis antisway bars at 1.25- and 1.00-inch diameters. A Saginaw quick-ratio steering box features one-and-a-half turns lock-to-lock.

Plain yet elegant Boss Motorsports 338 spokes are a perfect foil (it’s the reflective “white”) for the dark, moody body. Dustin built the combination with 18x8 and 18x9.5 rims and 235/40 and 275/35 Dunlop Direzza rubber. The front discs are from a ’69 Chevelle; the ones at the rear are from the RPO J56 package that was available on the ’85 Camaro. CHP