Ryan’s got a Jones for Driving his Twin-Turbo 1,600hp Small-Block 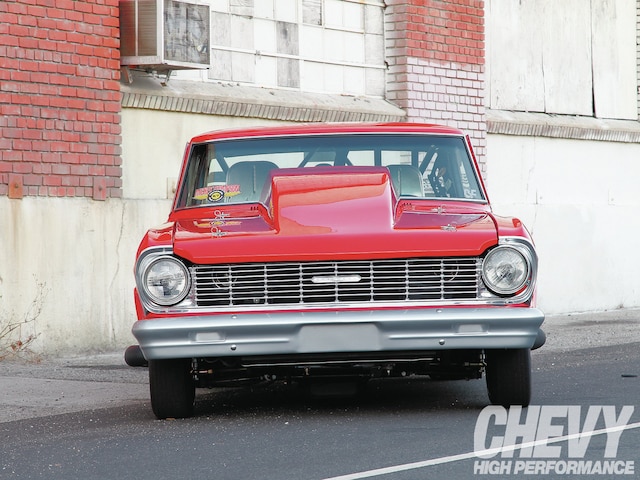 We warmed up for this exercise by watching turbo-car frolics on YouTube. The scenes are somehow magnified by those couple of seconds before boost rolls on and the tires light up insane. There’s nothing … and then the smoke grenades go off all at once. Instead of running out of steam, turbo lungs keep pulling like a maniac as the rubber becomes hopelessly unraveled. It’s a sight and an experience not to be forgotten.

Certainly, turbochargers have been applied to internal combustion engines for decades but only with the advent of sophisticated, programmable electronics has this preternatural power become so manageable, predictable, and awe-inspiring in a race car. In the street car racing world, they are now quite prevalent.

Canoga Park, California’s Ryan Jones runs this ’65 Deuce at PSCA, WCHRA, and NMCA/NMRA races and though he’s only been at it a couple of years in current configuration, he and his blood-red familiar have accrued a string of enviable accomplishments. Ryan: “I won the first event I ever entered in Wild Street/Drag Radial at the PSCA World Finals in November 2010. I won the first NMCA race on the West Coast, again in Wild Street. In the West Coast Hot Rod event, I won in the X275 Drag Radial class. I have also scored multiple runners-up in PSCA and WCHRA.”

A shoebox devotee since his first ’64 in 1993, the 34-year-old experimented with a 383 and Turbo 350 and along with some other upgrades, and his daily driver was regularly peeling off 12.20s. In 2000, he and his Nova became victims of circumstance. The throttle stuck. He freaked, whacked the brakes, and put the car on its head, stopping a few short feet from blowing a great, big hole through somebody’s house.

True, the Nova’s so-so body and suspension were totaled, but to Ryan this foible represented opportunity to begin anew and to upgrade. He bought his new shell from a friend for $500, swapped the motor, rearend, and all usable suspension and interior parts, and was back in the rubber-burning business a few months later.

“Over the years,” Ryan says, “the engine upgrades, gear, and converter changes got the car going 10.60s on pump gas and on all-motor. For a few years, I was street racing every night. It was a sleeper, and I was driving it all over Southern California to do that. Then I wanted to start racing in the 9.60 bracket class, so I stepped up the motor again with better cylinder heads and 14:1 compression. It went 9.60s for five years straight with a best time of 9.57 at 139 and was still on the motor. By this time, I could make pass with my eyes closed so I decided to take it to the next level. But what was the best combo out there?”

Ryan saw that all the twin-turbo fuel injection cars were running fast and consistently and that was all he needed. To make the turbo conversion copasetic, he changed the compression ratio, cam timing, and applied the snails. He was amazed when the combo produced nearly 1,000 hp more than the normal aspiration setup.

Ryan founded this engine on a humble production 400ci Chevrolet cylinder case to yield 406 ci (4.155x3.75). Longtime friend Mike at QMP Racing Engines in Chatsworth, California, began the build with some real hard parts. He calmed the 14:1 with custom Ross 8.5:1 turbo flat-tops so that he could build monster cylinder pressure and summarily contain it. The pistons swing on Oliver billet connecting rods that arc on one of Raul Negrete’s legendary (but sadly no longer available) Cola crankshafts. As testimony, Ryan has used “Old Faithful” for more than 12 years without incident. When you ask a racer about the cam specs he’s likely to shut up tighter than a Pismo clam or just say “nunya.” Ryan’s motor’s got a QMP custom ground solid-roller that is in the block with Jesel beltdriven timing gear. A race-bred Stef’s 6-quart aluminum oil pan closes up the bottom. The valvetrain is an eclectic assembly featuring Manton pushrods, a Crower 1.7:1 shaft rocker arm assembly, and more. The Dart 23-degree 220 aluminum cylinder heads include 2.08/1.60 valves in 72cc combustion chambers, BIG (as per Ryan) springs, and complete CNC porting. For the induction solution, QMP tailored the 406 with a Brodix intake modified for use with EFI. The injectors are rated at 160 psi and the 90mm throttle body is attached to a fabricated 90 degrees. Josh Deeds (Deeds Performance, Chatsworth, California) built the headers, installed Precision Turbo & Engine (Hebron, Indiana) 72mm turbochargers, and ran the cold-side plumbing for the PT3000 air-to-water intercooler inside the Nova’s little body. Deeds also tunes the Big Stuff 3 fuel injection at the track and in the dyno room. A programmable MSD 7531 Digital-7 Plus provides the lightning bolts. In the dyno cell, the 406 ripped a monumental number: 1,640 hp at 7,300 rpm and 1,320 lb-ft of grunt at 5,500 rpm. Torque is managed by a Mike’s Transmission Powerglide fitted with a 1.80:1 low gear ratio, a 10-inch Neal Chance 4,000-stall speed converter, and Deeds custom water-to-fluid cooler. Big grunt requires an even bigger rear axle. Jaime at Fab-Tech Welding in Chatsworth braced and custom-built the narrowed (4 inches per side) Strange Engineering 9-inch that houses a Mark Williams spool, 3.50:1 gears, and 40-spline axleshafts.

Briefly, the chassis modifications performed by “Fab-Tech” Jaime included mini-tubs, ladder bar coilover rear suspension, the 25.3 chromoly rollcage, and the installation of the AJE chromoly strut frontend. “We cut out the mild-steel 8.50 tubes and Jaime built the 6.50 ’cage so that the car would be ready for more power down the road,” Ryan says. “We ended up doing more work than anticipated, but now I won’t have to upgrade anything for a very long time.” With the superstructure, AJE also provided the wishbones and complete coilover struts. At the nether end of the car are AFCO Big Gun coilovers. A Flaming River manual rack directs the AFCO spindles.

Naturally, a thought-out racer like Ryan’s carries as little unsprung weight as possible and that includes the compact but tenacious Aerospace Components front and rear disc brake packages that incorporate four-piston calipers over 11.4-inch plates. And, there’s that bunch of laundry under the wing if all else fails. The rollers are pricey (for a drag race wheel) but lightweight forgings. Contemporary Weld V Series 15x4 and 15x10 drag wheel are capped with Mickey Thompson 26x4.5 ET front and 275/60 ET Street Radial tires.

The Nova only needs the stuff that helps to maintain it as a race car so let’s call it race car primal. Ryan wired the shoebox anew and chose an ARC switch panel to accommodate. A custom carbon-fiber cluster presents Auto Meter gauges. Another custom-built panel locates the critical items: RacePak data-logger, the Big Stuff 3, and MSD controls. Ryan also included a Kirkey race seat, a Grant steering wheel, a custom harness, and a B&M Pro Stick shifter.

The Red Toaster is a race car and race cars always get rash, so its body hasn’t been fussed over to look like something it isn’t. It’s straight and clean. Lou’s Performance in San Fernando repaired the quarters, finessed the fiberglass bumpers, attached the big-scoop bonnet, swapped some of the sheetmetal for lightweight replicas, and painted it DuPont Toaster Red. Really. CHP